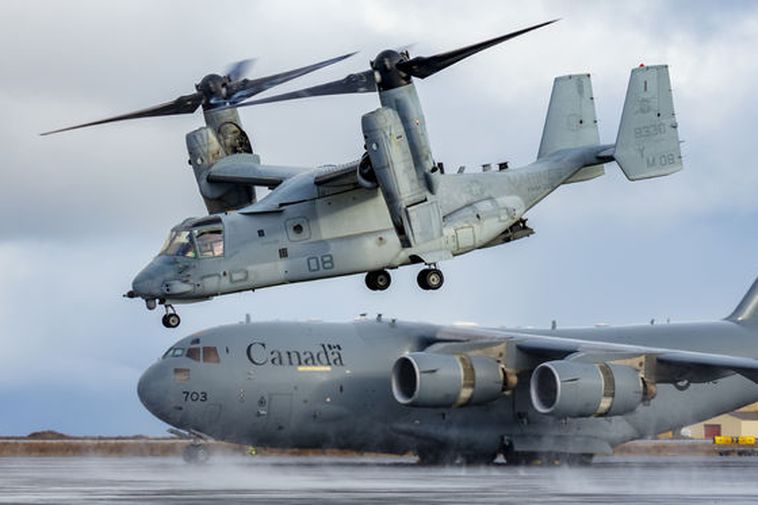 An MV-22 Osprey is in the foreground. The picture is taken at Keflavík International Airport in October of last year. Morgunblaðið/Árni Sæberg
Vala Hafstað
vala@mbl.is

Mbl.is has been told that the arrival of these aircraft is connected to US Vice President Mike Pence’s state visit to Iceland tomorrow. The military transport aircraft are of the type Lockheed C-130 Hercules and Lockheed C-5 Galaxy.

Icelandic news media have recently reported on the increasing presence of the US military in the country. Two military transport helicopters were seen hovering over the capital area on Thursday last week, and a day earlier, a US Airforce B-2 Spirit stealth bomber briefly landed at Keflavík International Airport - the first time that type of bomber visits Iceland. It features low observable stealth technology and can deploy both conventional and nuclear weapons.

The Osprey aircraft, which arrived yesterday, are designed for both vertical takeoff and landing and have short takeoff and landing capabilities. They function as conventional helicopters, in addition to having the long-range, high-speed cruise performance of a turboprop aircraft.

Pence will likely discuss national security and defense issues with Icelandic officials during his visit, mbl.is reports. In addition to the military aircraft arriving in the country, fighter jets from the US Air Force have been conducting air policing in Iceland in recent weeks, and military aircraft have frequently landed at Keflavík International Airport on their way elsewhere.

It has now been decided that Pence and Prime Minister Katrín Jakobsdóttir will meet at the offices of the Icelandic Coast Guard at Keflavík International Airport tomorrow night. She will have just arrived from addressing the Council of Nordic Trade Unions in Malmö, Sweden, and he will be about to leave Iceland.

Pence is now expected to arrive in Iceland close to noon, instead of early morning. He had been invited for lunch at Bessastaðir, the presidential residence, but those plans may chance. He will be meeting with Minister for Foreign Affairs Guðlaugur Þór Þórðarson and Reykjavík Mayor Dagur B. Eggertsson at Höfði house in Reykjavík in the afternoon.