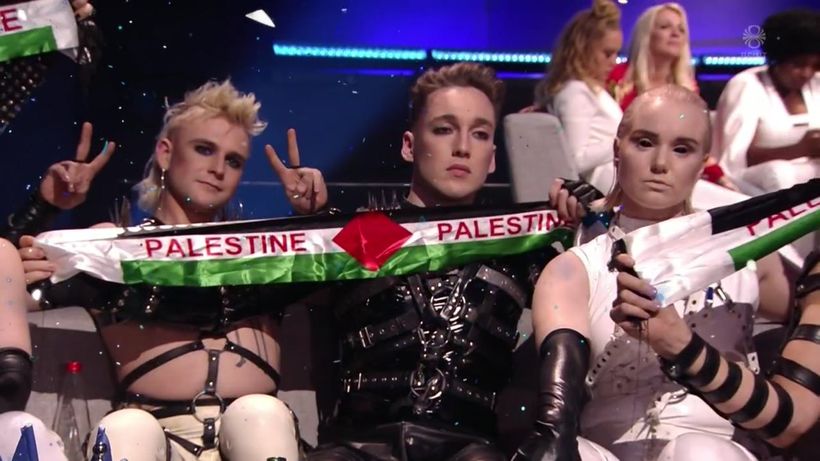 Hatari band members, waving a banner in the colors of the Palestinian flag. Screen shot/RÚV

“We have not received anything from EBU [the European Broadcasting Union], and we’ll wait and see whether that happens,” Magnús Geir Þórðarson, director of RÚV, the Icelandic national broadcasting station, stated in an interview this morning on RÚV Radio 2 . He said this when asked about the possible consequences of some members of Hatari, the Icelandic punk rock band representing Iceland at the Eurovision Song Contest, having showed their support for Palestine by waving a banner in the colors of the Palestinian flag Saturday night when cameras were pointed at them, as the votes for Iceland were being announced, during a live broadcast of the contest’s grand final.

Hatari finished 10 th in the contest.

Magnús stated that in light of Eurovision history, it is unlikely that the consequences will be serious. “I find it very unlikely, I must say. It is clear that Eurovision should not be used for a political purpose. That is stated in the contest’s rules, and Iceland has participated for over 30 years, and of course we go there, intending to follow the rules of the contest, now as always.”

He described the circumstances as special, and said this was a decision the artists had made at the spur of the moment.

Magnús was asked whether he believes it possible that Iceland be excluded from next year’s contest. “I’d find it abnormal and strange if the penalty were that harsh,” he replied.

“More likely, a formal comment might be made about this,” he suggested, but emphasized this was only his private speculation.

He said the displaying of the banner was not part of RÚV’s plan. “On the other hand, when the nation selected Hatari, we knew that this was not a sugar-coated contribution. Those are passionate artists, and it’s in the nature of art to ask poignant questions, introduce new aspects, and such.”

He is very pleased with Hatari’s performance at the contest, and calls it one of the best Iceland has ever contributed to Eurovision. 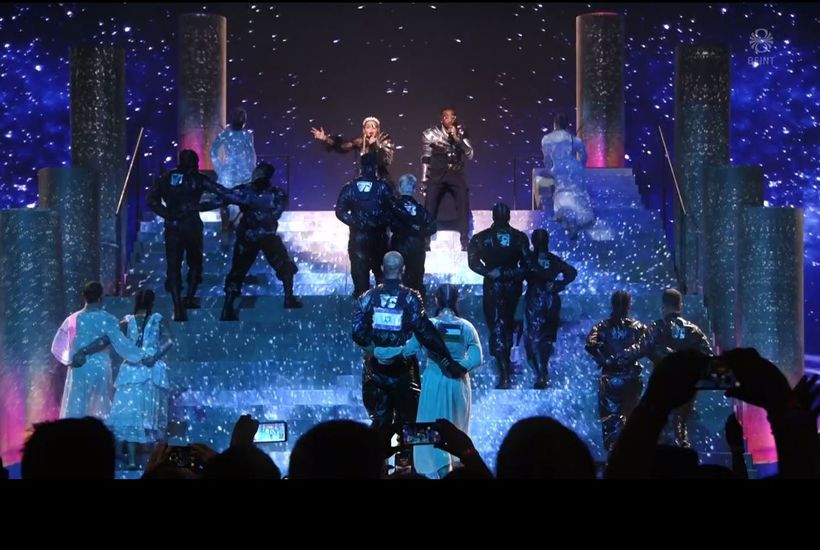 Yesterday, a Norwegian female dancer from Madonna’s act during the grand final celebration was stopped at the airport and questioned for close to two hours. The reason: during the act, she was wearing the Palestinian flag on the back of her costume.

“It was an error,” Miri Regev, culture minister of Israel, stated to journalists , in referral to Hatari and Madonna’s display of the Palestinian flag. The European Broadcasting Union condemned both displays, according to the Guardian.

Michael Segalov of The Guardian disagrees. In his article of the incident he writes:

“So why is the mere idea of displaying the flag of a nation state in an international singing contest considered inappropriate? Throughout the night, both in the crowd and in televised segments from the green room, flags from European nations and beyond were waved proudly and without criticism – as were rainbow and trans pride flags in a display of solidarity with the contest’s large LGBTQ+ fanbase. Nobody batted an eyelid: of course they shouldn’t. And yet when an official realised that Iceland’s representatives were preparing to express solidarity with another oppressed and marginalised group – the Palestinians – attempts were made to confiscate their property.”

According to RÚV , Hatari band members are now on their way back to Iceland, through London, after boarding a flight shortly before 8 am, Icelandic time. The band faced no questioning regarding the incident at the airport.