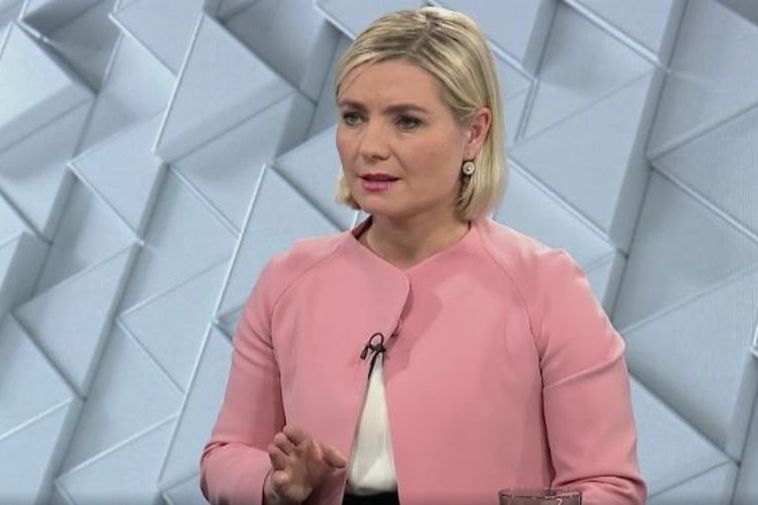 Awful misogynistic remarks were made about Minister Alfreðsdóttir in the Klaustur bar conversation that was leaked. Screenshot/RÚV

Iceland's Minister of Culture Lilja Alfreðsdóttir appeared on the Kastljós news programme tonight, speaking for the first time about her reaction to the comments made about her in  bar conversation two weeks ago, recorded by a witness.

"I experience this as violence. They are perpetrators of violfence," said Alfreðsdóttir about the comments made by former PM Sigmyndur Davíð Gunnlaugsson, Bergþór Ólason and former Minister for Foreign affairs and MP for the Centre Party Gunnar Bragi Sveinsson.

Alfreðsdóttir said that she could not bring herself to listen to the recording but had seen the comments in writing. Her first reaction had been to try to not get upset she told Kastljós.

"But on Monday when further material from the recordings was made public and the most sordid remarks came out I just buckled. I couldn't believe men actually could talk that way. I would like to note that this is pure violence."

The comments made about the Minister were of a sexual nature where they spoke (in a very crude manner) of her toying with men and wanting to have sexual relations with her.

She told Kastljós that she had received a lot of support from fellow ministers and MP's at Parliament during this difficult time. "I would like to say, to make this clear, that this is insupportable, inexcusable and we do not want our society controlled by people like this."

None of the men had called her she said. "Ólason hasn't even tried to get in touch. But I've said that this is inexcusable. I have received messages from Sigmundur Davíð and Gunnar Bragi. None of these people tried to have a phone conversation with me."

She furthermore said that she found Gunnlaugsson's comments the most hurtful as she thought they were friends. She also criticised that he hadn't apologized, or seemed to mean it, but just tried to defer responsability.

"Iceland has achieved success in matters of equal rights. Really good success. Those who did this have tarnished our image internationally."