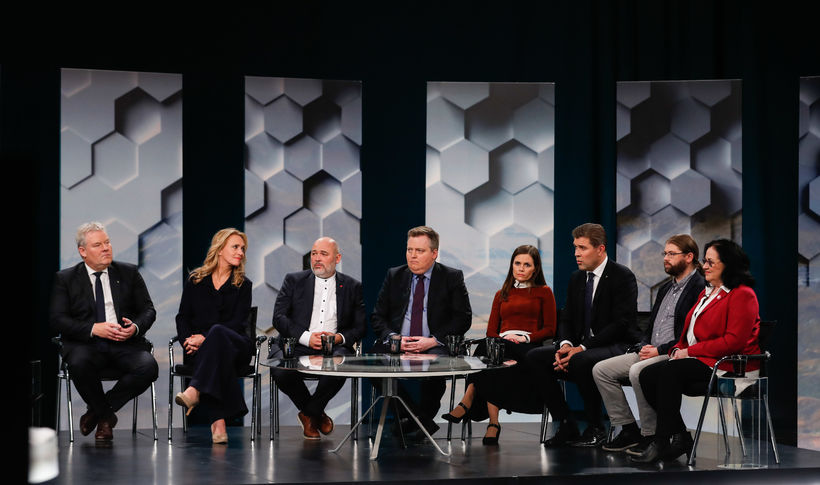 The leaders of the eight parties that won seats in Iceland's parliament in the 2017 general elections discuss the results on RÚV, Iceland's national broadcaster. Iceland Monitor/Eggert

Icelanders wake up to a different political landscape after Saturday’s general elections. The three parties that made up the center-right coalition government lost 12 of their 32 seats in Iceland’s 63 member parliament. The opposition parties, taken together, did however only win one of the seats lost by the outgoing government parties. Instead, two new entrants on the political scene whipped up the other 11 seats.

The new parliament will be made up of eight politcal parties, more parties than ever before. In light of that the last year’s coalition talks took almost three months to complete, forming a new coalition government after this elections is expected to be complicated. A three party coalition government is only possible with the inclusion of both the Independence Party and the Left-Green Movement, any other coalition would require four or more members.

Here is the breakdown of the winners and loosers:

While the right-of-center Independence Party lead by Prime Minister Bjarni Benediktsson retains its position as Iceland’s largest political party as it has most if its history, it lost five of its 21 seats in parliament. Despite the outcome, Benediktsson had a reason the celebrate as many of the opinion polls published last week showed the Indpendence Party receiving far less support.

The Left-Green Movement, lead by former Minister of Education Katrín Jakobsdóttir gained one seat in the election. This is less than many opinon polls predicted, but the Left-Greens were polling near 30% earlier this month. Jakobsdóttir is seen as a candidate for the Premiership by many in a potential left-of-center coalition government. The party is Iceland’s second largest parliamentary party, a position it attained in last year’s elections. 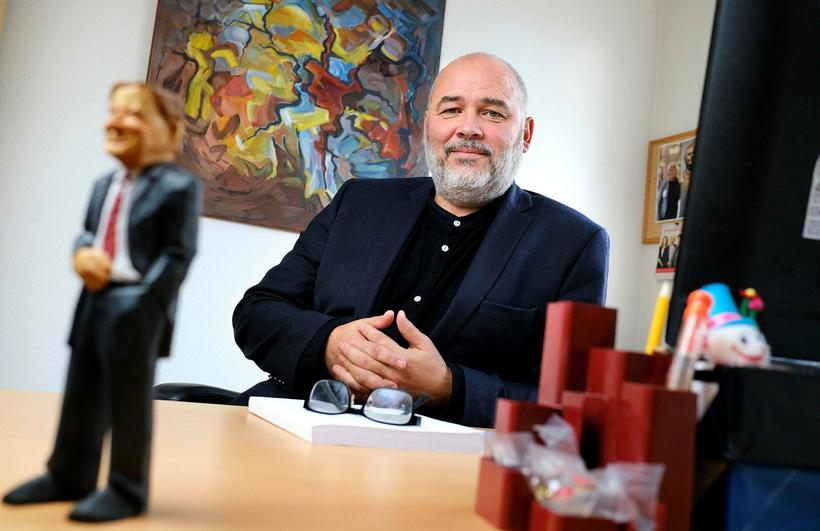 The Progessive Party, lead by former Prime Minister Sigurður Ingi Jóhannson , received less support than in previous elections, but holds on to its eight parliamentary seats. When the snap elections were called last September, former party leader and Prime Minster Sigmundur Davíð Gunnlaugsson left the party and founded the Center Party . Many senior figures and members left the Progressives and joined the new Center Party. Despite the split, the Progressive Party has managed to retain most of its support from last year’s elections.

A newcomer on the scene, the Center Party was founded and is led by former Prime Minister and Progressive Party leader, Sigmundur Davíð Gunnlaugsson. The Center Party is making a strong entry into the political scene, making it the big winner of the yesterday’s elections. This is especially a sweet personal win for Mr. Gunnlaugsson who was forced to step down as PM amidst the Panama Papers scandal, and consequently ousted as party leader . 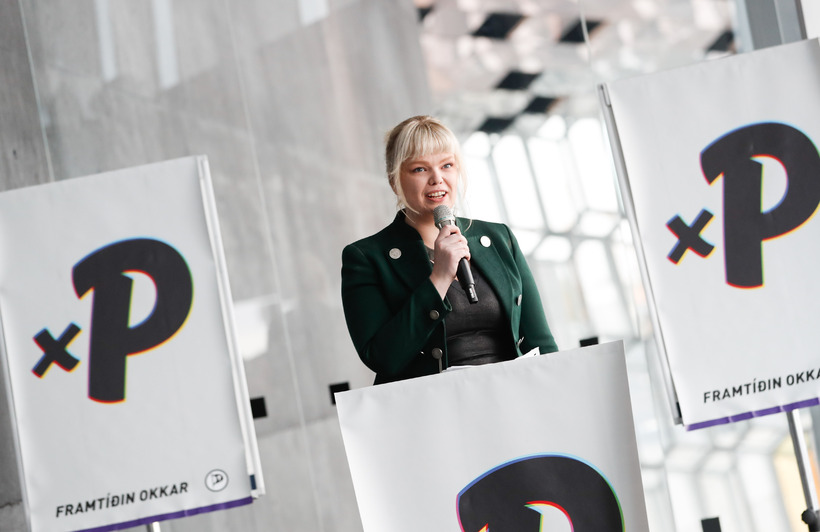 The Pirate Party upended Icelandic politics last year whe it won 14.5% of the votes and 10 seats in parliament. It had strong support in opinion pools in early 2016 and was at times measured as the largest political party in Iceland, a lead that it lost in the run-up to the 2016 fall elections. (See here and here ). In yesterdays elections, the Pirate Party lost almost a third of its electoral support and saw its parliamentary party shrink. 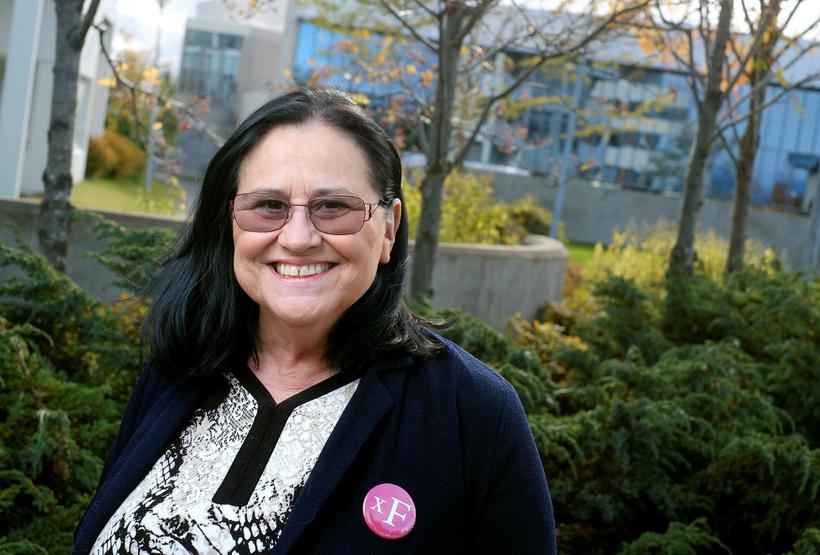 The People’s Party is another newcomer in the Icelandic parliament, led by Inga Sæland. The People’s Party received 3.5% and failed to earn seats in parliamentary in last year’s elections, but the cutoff is 5%. The party was polling high early in this year’s campaing, but saw its support drop below the cutoff in the days leading up to election day. They seem to have had a strong finish at the end however, and Mrs. Sæland and her team have a reason to rejoice as one the election’s big winners. 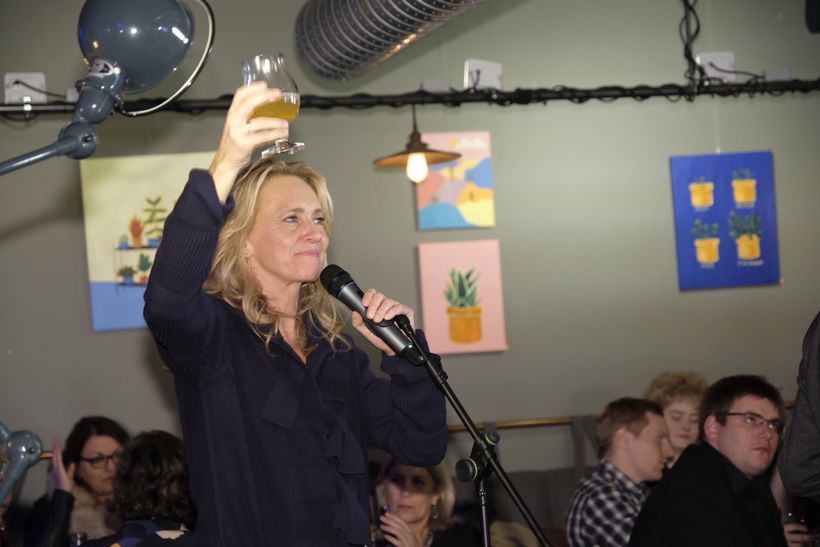 A newcomer in last year’s election, Restoration positions itself as center or right-of-center on the political sphere. Many of its members were members of the Indpendence Party, including newly elected party leader Þorgerður Katrín Gunnarsdóttir and current Minister of Fisheries and Agriculture. Gunnarsdóttir served as the deputy leader of the Independence Party 2005-2010, and as an Education Minister on behalf of the Independents 2003-2009. Restoration entered parliament last year with seven MPs after winning 10.5% of vote. After long-winded coalition talks that took almost three months, Restoration joined a coalition government with the Independence Party and Bright Future .

The left-of-center Bright Future, lead by Minister of Health Óttarr Proppé, entered parliament in 2013 with 8.2% of the votes and six MPs. In the 2016 elections it received 7.2% and four MPs. Last September and less than nine months after forming a coalition government led by the Independence Party, Bright Future withdrew from the coalition citing a “serious breach of trust” following revelations that the Prime Ministers father had provided a letter of recommendation for a convicted child abuser seeking to “ restore his honour .” In yesterday’s elections, Bright Future saw its support almost disappear, making it the biggest looser of the 2017 elections.