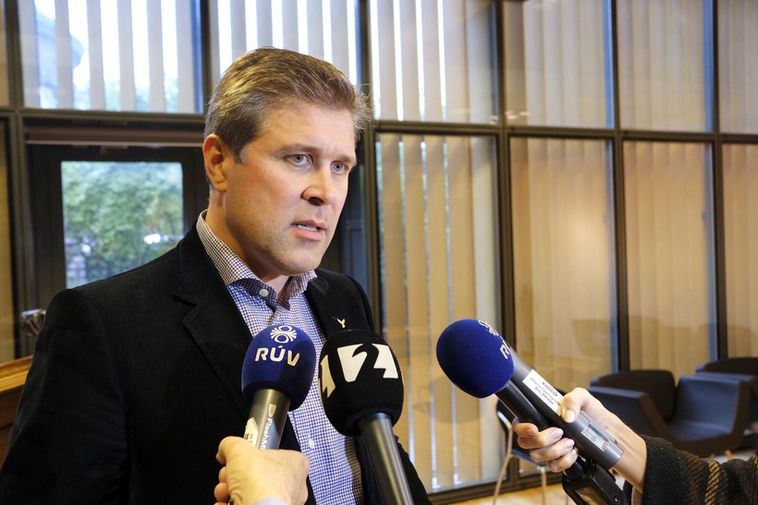 Bjarni Benediktsson has written a statement responding to the allegations. mbl.is/Kristinn Magnússon

Prime Minister Bjarni Benediktsson responds to this morning allegations saying that
all his transactions with Glitnir Bank were normal. "Despite repeated investigations no fault has been found with any of my transactions leading up to the crash."

Benediktsson has written a statement on his Facebook page because of this mornings media coverage by Stundin, The Guardian and Reykjavik Media which reveals that Benediktsson sold his assets in a fund called Sjóður 9 (Fund 9)  at Glitnir bank hours before Iceland's economic crash. Stundin said that Benediktsson had inside knowledge of the real situation of the bank and the financial system as a whole.

Benediktsson writes that it's wrong that he had confidential information on the state of the bank and the financial system as a whole.

"Today’s news reports imply that I was in possession of confidential information about the standing of the financial system, or of Glitnir, at the time when I sold my shares, on the one hand, and when I sold the remaining balance I owned in Fund 9 in the days prior to the collapse of the bank on the other. These are serious accusations. These reports insinuate that I abused my position and engaged in insider trading. Both suggestions are wrong."

Benediktsson says that all his transactions with Glitnir Bank were normal. " Despite repeated investigations no fault has been found with any of my transactions leading up to the crash. This is the crux of the matter."

He goes on to say that as previously announced, he had sold his Glitnir shares in 2008.  "After the sale, the sums raised continued to be held in the bank, mostly in Fund 9 (a mutual fund). I then sold that holding gradually over the year, transferring parts of the proceeds to other funds and deposit accounts in the bank."

In his statement Benediktsson continues and writes:

"Today’s news reports imply that I was in possession of confidential information about the standing of the financial system, or of Glitnir, at the time when I sold my shares, on the one hand, and when I sold the remaining balance I owned in Fund 9 in the days prior to the collapse of the bank on the other. These are serious accusations. These reports insinuate that I abused my position and engaged in insider trading. Both suggestions are wrong.

A global financial crisis raged throughout the whole of 2008, and Iceland did not escape it. Attempts by the Icelandic banks to refinance their obligations at the beginning of the year bore no result and share prices fell rapidly. Illugi Gunnarsson and I wrote articles about this situation in February 2008 in which we drew particular attention to how serious the matter had become and proposed methods to address it. While preparing those articles we spoke to a large number of experts both in and outside the financial sector; our conversations concerned, in particular, what measures could be taken to avoid loss. Our proposals were influenced by these discussions.

A few points are of crucial importance here:

First, attention should be drawn to the fact that on 29 September 2008 it was announced that the state intended to take over 75% of Glitnir; this was two weeks after the collapse of the bank Lehman Brothers. No one could have been unaware that a very serious situation had arisen in the Icelandic financial sector. During the days following this announcement and down to the passing of the emergency legislation on 6 October Iceland’s finance markets were in free fall.

Second, it is not true that I applied to have my shares sold on the same day that the emergency legislation was passed, 6 October 2008. The fact is that I applied for this on 2 October, as is demonstrated by the documents that have been produced on this matter; the settlement, on the other hand, took 2-3 banking days. I sold my holding in Fund 9 and purchased units in Funds 5 and 7, amongst others, which carried less risk, and continued to keep my money in Glitnir bank.

It is important to note that trades on Fund 9 were suspended on the day Glitnir banki was taken over by the Icelandic authorities on 29 of September. Trades on Fund 9 were allowed to resume on 1 October and by that time its value had decreased by 7%.

Third, I wish to have it stated clearly that a part of my investments in the bank’s funds, like those of many other customers of the bank, were locked in there for many years.

Fourth, it has been insinuated that I relayed information about the work of the Icelandic Financial Supervisory Authority (FME) to an employee of the bank. This has no basis in reality. No such information was relayed; I did not possess any such information. It was obvious to everyone, on the other hand, that the FME was working on these matters. This was after the announcement had been made concerning the state’s taking over of the bank. It would have been irresponsible if the FME had not been making every possible effort at this time to save what could be saved, and that I perhaps said something to this effect gives no occasion for reporting in the news.

Fifth, as is generally known, the Special Investigation Commission (SIC) appointed by parliament to examine the events leading up to the collapse of the banking system received the broadest possible authorisations for carrying out its investigations. No stone was left unturned, and particular attention was focused on the events preceding the financial collapse. All of this is covered in the SIC’s report.

In addition, the bank’s winding-up committee examined all transactions prior to the collapse. Everything that happened in the period preceding the collapse has been scrutinised twice. No criticisms have at any time been made of my dealings with the bank. I have never been accused by anyone, apart from certain journalists and the occasional political opponent, of having done anything suspicious.

Sixth, I wish to state that I took the decision many years ago to resign from all my positions on the boards of companies and to sell all shares I owned in order to devote all my working energies to a position of leadership in Icelandic politics. I have no quarrel with those who say that it is inappropriate for political leaders to engage in business activities. I have shown, in practice, how I consider it best to draw a line between the two.

The financial collapse, which was an immense blow for Iceland’s economy, has been investigated to the last detail. We in Iceland have made a success of rebuilding our country.

We must channel our energies into this rebuilding and make use of the many opportunities we have to improve our standard of living.

The coming general election is a chance to do this."