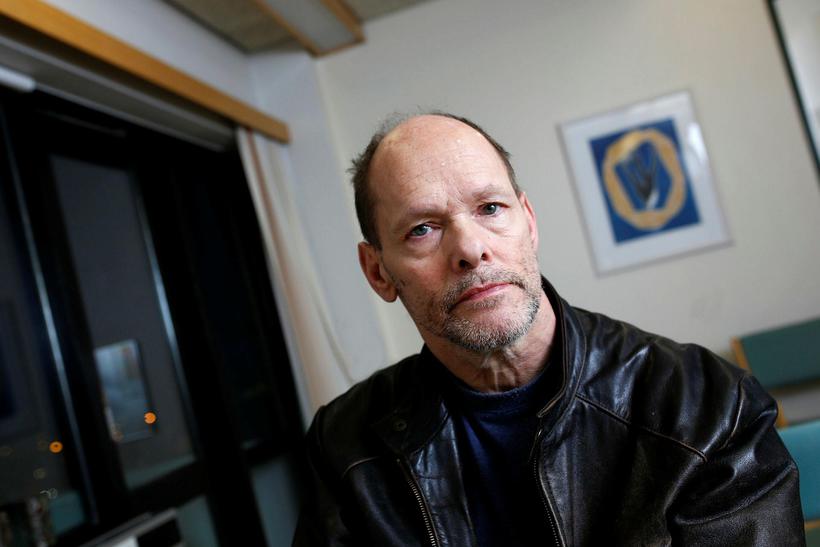 Haraldur Ólafsson was put into Kópavogshæli aged three. It would become his home for 22 years. mbl.is/Eggert Jóhannesson

Haraldur Ólafsson was only three years old when he became a resident at Kópavogshæli home for the disabled in the greater Reykjavik area. It was to become his permanent home for the next 22 years. He never told anyone how miserable he was because he knew nobody would listen. "No one ever comforted me."

"I was often afraid when people screamed or hit the walls. I know it's because they felt bad but I was really scared. I was also scared when the staff threw people to the ground. I remember the cells, the rooms where people were often shut inside. I didn't tell anyone how bad I felt. I didn't know that one was supposed to talk about how you felt. That's what the supervisors said. I knew that nobody would listen to me."

In 1959, Haraldur Ólafsson was three. He was suffered partially from spastic paralisys and is not in full control of his movements. Because of this, people simply assumed he was mentally retarded.  He underwent no tests whatsoever to his intelligence and it wasn't until his teenage years when a support teacher realised Ólafsson's full potential. He finally learned to read and write, finished college and became an electrician.  Today he works on design and inventions a the Reykjavik Technical college. 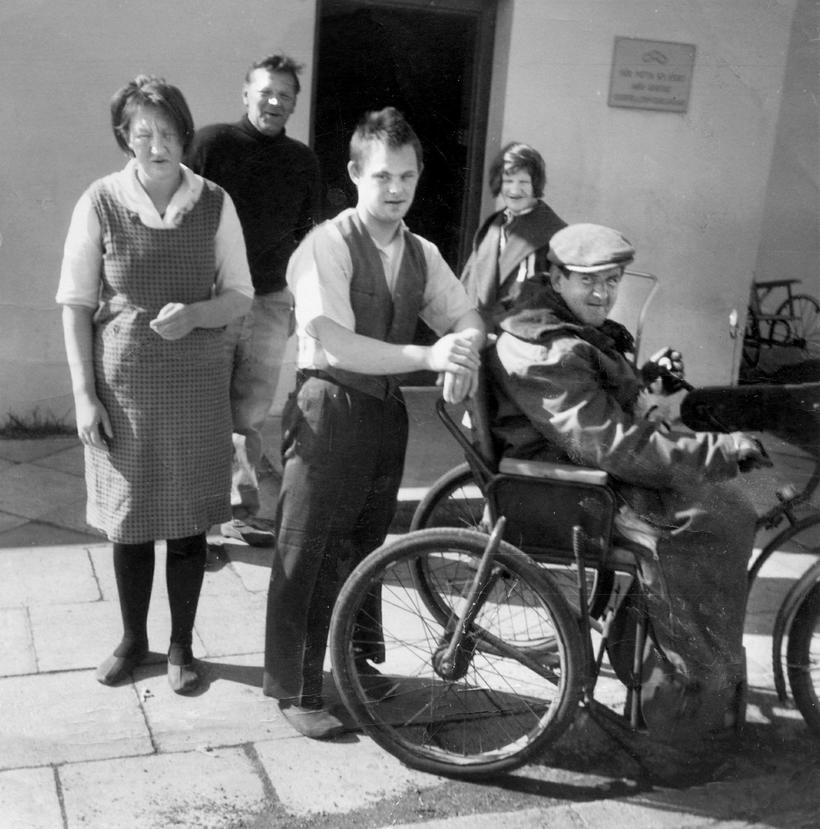 Residents at Kópavogshæli in the late fifties.

"My mother died when I was three. I couldn't stay with my dad, he lived with another woman and had other children. So because of my disability I was sent to Kópavogshæli," he explains in an interview with Morgunblaðið. "Nobody checked out exactly how disabled I was and for the first eighteen years of his life he wasn't even provided with a wheelchair. "I just crawled to get about," he explains. "I remember when I was six somebody put me on a tricycle. That's a really good memory, it was the first time that I could move around fast."

Hrefna Haraldsdóttir, who is a special needs caretakeer and Haraldur's close friend is also present at the interview. "He was both disabled and had a difficult social background so that he had to go to an institute or home. He has never been mentally disabled in any way, people just expected that he was." 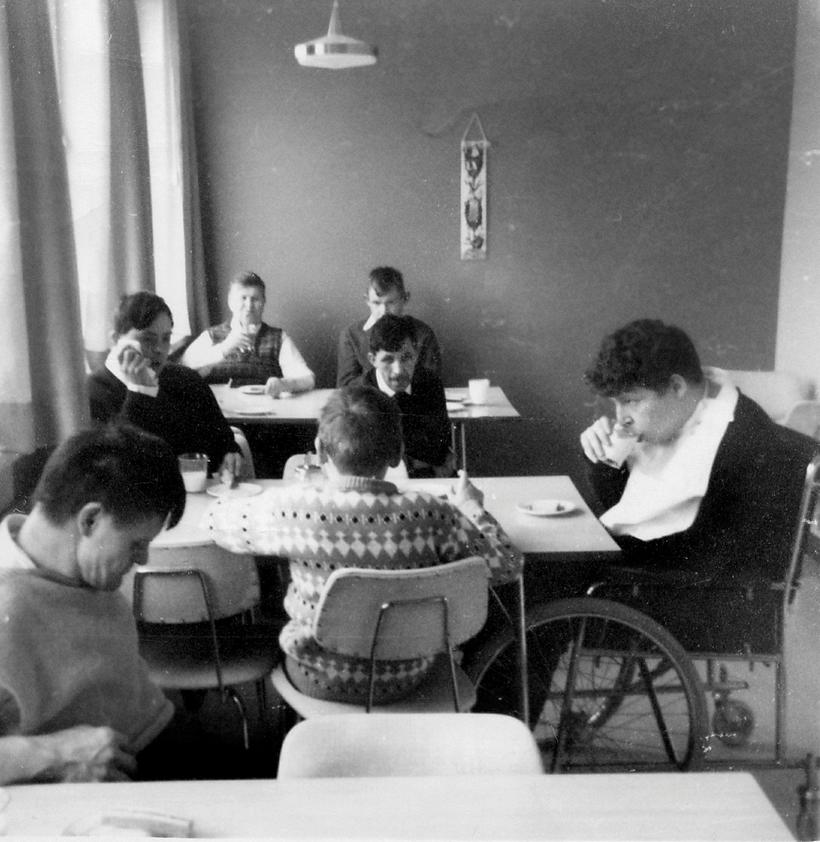 An image from the institute from the early sixties.

Haraldur never attended physical rehabilitation classes, he received no crutches, no wheelchair, no treatment of any kind. "I only got crutches when I was around 18- 20 years old."

"Your trousers were patched with leather because you crawled around," Hrefna reminds him.

Haraldur says that he can confirm many of the things revealed in the recent report that revealed the terrible condition and mistreatment of the residents of Kópavogshæli, especially the children.

"I felt bad inside that building, it was so loud. I wanted to get away. Sometimes people were put in strait jackets but I never saw a child in one. But the children were poorly.  Their diapers weren't changed for hours, older children, unable to attend to their own toilet needs spent hours with excrement in their clothing." 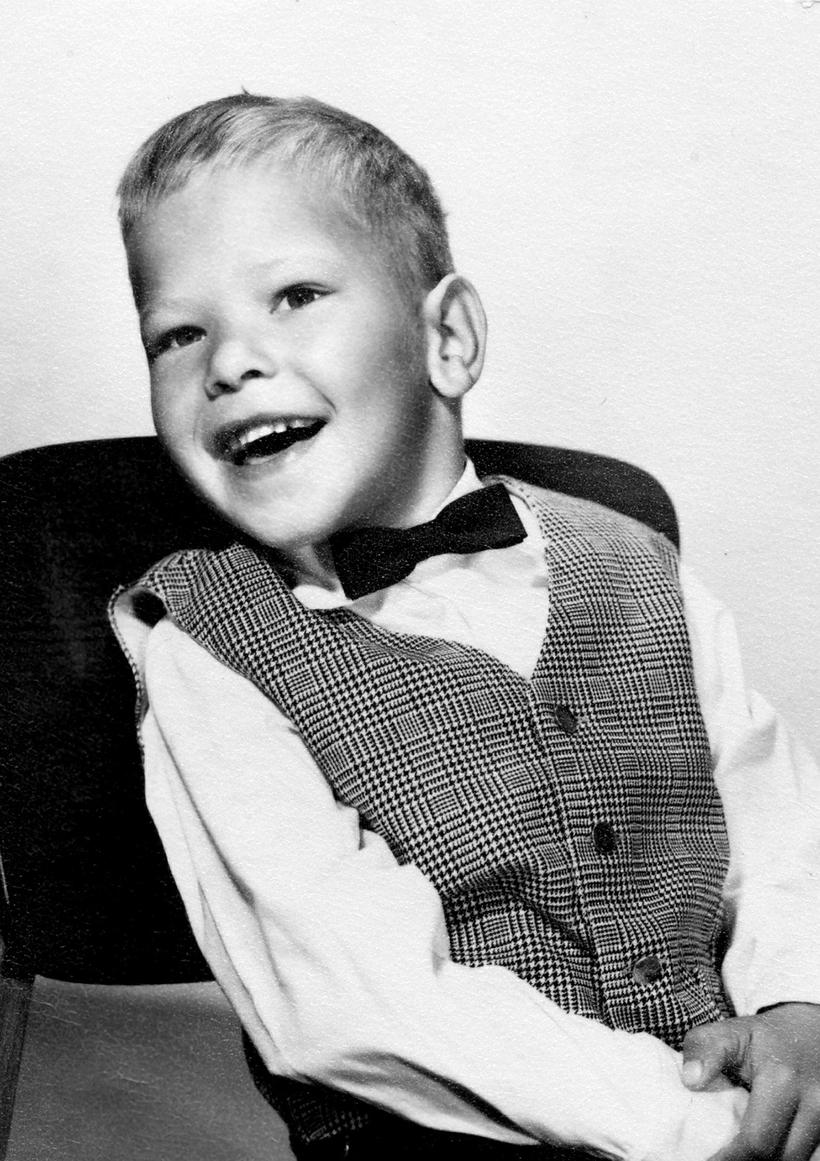 Haraldur Ólafsson as a young boy.

However, Haraldur had a family who loved him and his father and aunt visited him very regularly. Sunday was visiting day but I felt  bad sometimes because many of the children never got any visitors. It was as if they had no families." 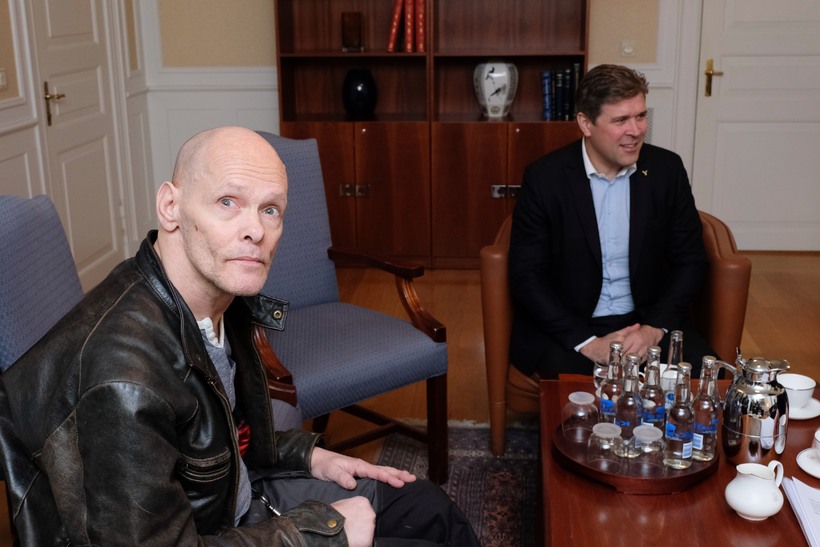 "Einar realised how intelligent Haraldur was and he fought hard for him to be able to go to Öskjuhlíðarskóli," explains Hrefna. "It was quite a fight. People just didn't believe in him. But finally he got in, when he was 18 years old." Haralud completed school at Réttarholtsskóli when he was over 20 years old, obviously having to catch up quite a number of school years.

Haraldur moved from Kópavogshæli when he was 25 years old, went to the Reykjalundur rehabilitation centre and then moved to a residence for the disabled. He now lives alone with support from social services. He used to walk around on crutches but after suffering from bone breakage he's now confined to a wheelchair. Thirty years ago he got his drivers licence and it completely changed his life. "They weren't going to let me take my drivers test but now I go everywhere I please in a specially fitted car."

Last year a documentary was made about Haraldur, by film maker Páll Kristinn Pálsson,  titled Halli sigurvegari, or Halli the conqueror. These days Haraldur is working on a patented electric tricycle for the disabled. He never imagined, as a child, that he would ever design or build anything in his life.

When the report was issued last week on the terrible conditions of the residents of Kópavogshæli and the mistreatment of children there, society was rife with anger. "I understand that. But I lived there. I didn't know my life could be any different until I moved away from there. I wish I could have gone to school with other children."

Do you get angry when you look back on your life? "No, I don't think like that. It's really hard to think about, but it doesn't help me to be angry. It's just something that happened and I have to live with that."

Haraldur met with Prime Minister Bjarni Benediktsson yesterday who apologized to him on behalf of the Icelandic government for what he had to go through. Benediktsson invited both Haraldur and Hrefna to his office to discuss Kópavogshæli and compensation to its residents.

"We had a good meeting. I'm glad that I got that apology."

Benediktsson has also issued a public apology from the  Icelandic government to all the former residents of Kópavogshæli about the things that happened all those decades ago.

The interview with Haraldur appeared in Icelandic in last weekends edition of Morgunblaðið.

Most Icelanders happy with Pope Francis