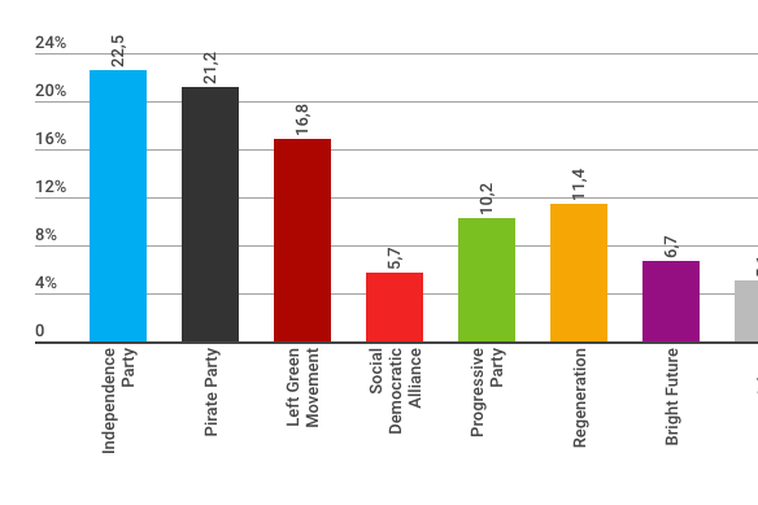 Three polls published earlier today, on the eve of the election, indicate an extremely close race. A Pirate Party-inspired coalition government has a chance of winning a majority of seats in Iceland’s parliament Alþingi.

Today’s polls indicate that the Pirate Party is expected to receive between 18 and 21% of the vote, making it Alþingi’s second largest party. The Pirate Party and three left-wing opposition parties, the Left-Green Movement, Bright Future, and Social Democratic Alliance, have declared that they will work together to form a coalition government if they win enough seats. Latest polls shows the Pirate-led alliance fluctuates around the 32 seats needed to win majority in Iceland's 63 seat parliament.

If the Pirate Party-led alliance does not win enough seats, a new right-of-middle political party, "Regeneration," may end up in a key position to either extend the life of the incumbent government coalition or form an entirely different coalition.

All in all, we’re looking at an extremely close race and an exciting, and long, election night in Iceland. The first results are expected at 10 pm (GMT) on Saturday when polls close. The final outcome may not be clear until the last vote has been counted early on Sunday.

You can follow the VOTE COUNT LIVE here on Iceland Monitor as results are reported.