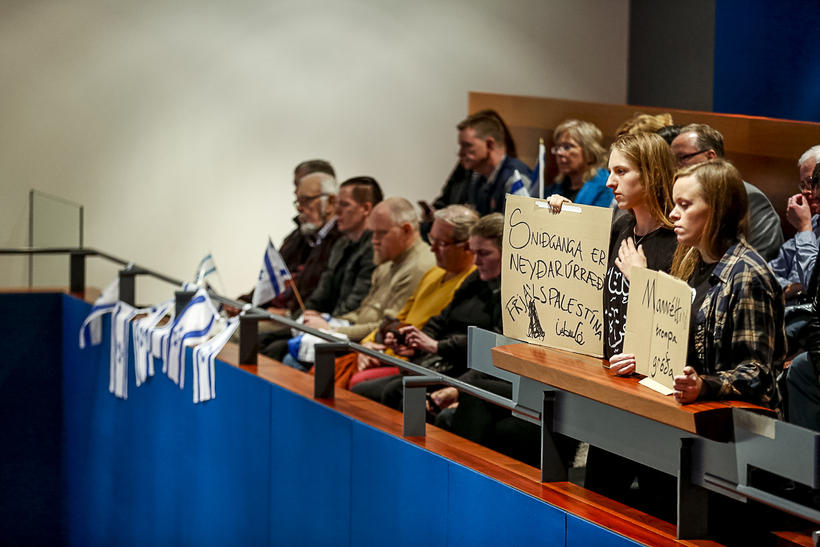 Attendees at the City Council meeting which began at 5 pm today showing their solidarity with Palestine and urging the CIty Council to stand with human rights. Mbl.is/ Styrmir Kári

The opposition in the City Council stated that they had already made their statements clear, and that the majority were trying to rewrite history in their favour. The proposition of the majority stated that the matter should go further and that the exact manner of the boycott needed to be specified. The opposition believed that this suggestion was not enough to repair the damage already made to the Icelandic economy that they believe has occurred already.

City Councillor Hjálmar Sveinsson responded to Kjartan Magnússons speech saying that the while matter was intended to harm a popular Mayor. Mayor Dagur B. Eggertsson stated his belief that Iceland's stance to trade with the occupied areas of Palestine needed to be clarified, adding that this was not the role of the City of Reykjavik.

City Councillor Áslaug María Friðriks­dótt­ir of the Independence Party stated that what mattered most now was to limit the damage done following the acceptance of this proposal by the majority, a proposal to boycott an entire nation.

Members of the Icelandic BDS movement were present at the meeting with signs urging the City Council to stand for human rights.