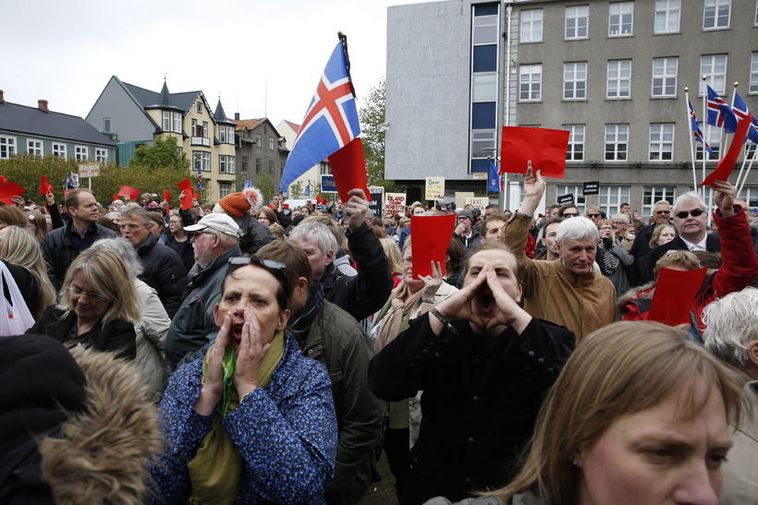 Police figures suggest an estimated 2,500-3,000 protestors – the vast majority of the crowd on Austurvöllur this morning – responded to the call to demonstrate organised on social media.

Protestors banged drums, trumpeted and booed their way through proceedings, in an organised protest operation which has drawn both praise and harsh criticism.

Crowds chanted “Vanhæf ríkisstjórn!” (meaning ‘incompetent government’) over the choir – including the performance of the national anthem – and over the traditional poem read by the fjallkona, the ‘queen of the mountains’, a symbol for the nation of Iceland.

The President of Iceland, Ólafur Ragnar Grímsson, and the Prime Minister, Sigmundur Davíð Gunnlaugsson, were also booed loudly as they laid wreaths at the monument of Jón Sigurðsson, the leader of the 19th-century Icelandic independence movement.

The demonstrators interviewed by mbl.is gave various reasons for the dissatisfaction expressed at the incumbent government: the sidelining of a draft new Icelandic constitution ratified by referendum in 2012, Iceland’s current fisheries ‘quota system’, concerns about the state of the welfare and health systems, and the reneging on a pre-election pledge to hold a referendum on EU accession negotiations.

At times, the official speakers at the event could barely make themselves heard over the noise of the protestors.

The decision to stage an anti-government demonstration to clash with official 17 June National Day celebrations has inevitably split opinion.

In the opinion of Guðrún Helga Stef­áns­dótt­ir, protesting today on behalf of the Constitutional Society, it is wholly appropriate to demonstrate particularly on this day, the birthday of Jón Sigurðsson – “independence day”.

Sigurðsson has gone down in Icelandic history as the utterer – together with his colleagues – of the immortal words “Vér mótmælum allir” (meaning ‘we all protest’) to the assembled Danish overlords at the National Conference of 1851. These words of protest and defiance cemented Sigurðsson’s place as de facto head of the Icelandic independence movement.

Stefánsdóttir’s sentiment is not shared by former Icelandic Minister of Justice and Ecclesiastical Affairs, Björn Bjarnason.

In a scathing Facebook status posted today, Bjarnason opines that, “[c]hoosing 17 June to demonstrate on Austurvöllur shows above all reprehensible arrogance.” He goes on to compare this with the “arrogance” he suggests has been displayed in recent times by the political opposition in the Icelandic Parliament (‘Alþingi’).

“The political forces behind people’s hollow noise at today’s ceremony – which was supposed to be a joyous occasion – are clear for all to see,” he concludes.

The speech given by Prime Minister Gunnlaugsson at this morning’s event was an upbeat call for optimism and forward-thinking. Here are some salient quotes from the speech: