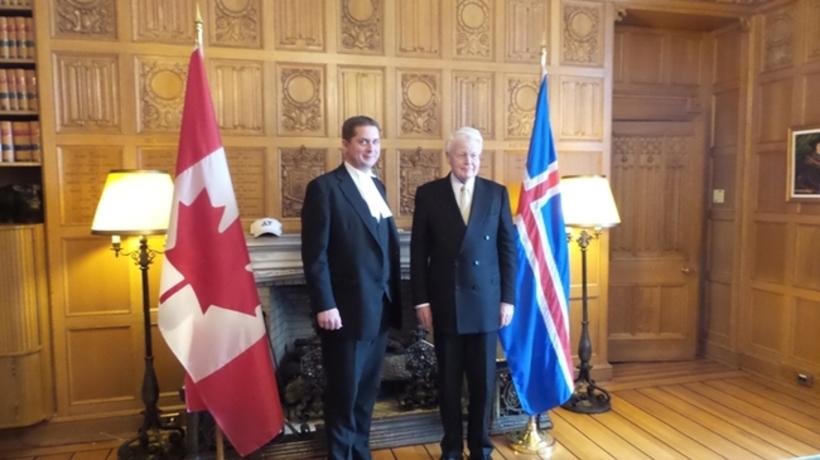 President Grímsson with the Speaker of the House of Commons, Andrew Sheer.

The President of Iceland, Ólafur Ragnar Grímsson, is currently on a four-day official visit to Canada. On the agenda are international cooperation, trade and historical links between the countries.

Yesterday morning, President Grímsson spoke on ‘The Global Arctic: A New Model of Global Cooperation’ at the Centre of International Governance (CIGI) Innovation in Ottawa.

He was then welcomed officially to Canada with a lunch function organised by the Governor‑General of Canada, David Johnston. This was followed by a visit to both houses of the Canadian Parliament and a meeting with the Speaker of the House of Commons, Andrew Sheer.

Most Icelandic immigrants to North America settled in Canada and the President had the opportunity also yesterday to meet a large group of ‘Friends of Iceland’ at the home of the Icelandic Ambassador to Canada, Sturla Sigurjónsson.

Rounding off the day were talks with Leona Aglukkaq, Canadian Minister for the Environment. Discussions touched upon the growing interest of Asia and Europe in policy-making and research in the Arctic and upon the work of the Arctic Economic Council.

Grímsson and Aglukkaq also discussed the Article Circle, an interdisciplinary conference on Arctic issues set up by Grímsson in 2013 and held annually in Reykjavik.

Today and tomorrow, the President will be attending and speaking at the In­ternati­onal Economic For­um of the America and meeting the Quebec Minister for Transport, Jean D’Amour.

The visit will move on Friday to Toronto, where Grímsson will be addressing the Annual Meeting of the Icelandic-Canadian Chamber of Commerce and lunching with members of the ‘Friends of Iceland’ association there.

The main focuses of this presidential visit are to foster greater cooperation in the Arctic, promote growth in both economy and trade, and cementing the historical ties linking Iceland and Canada.