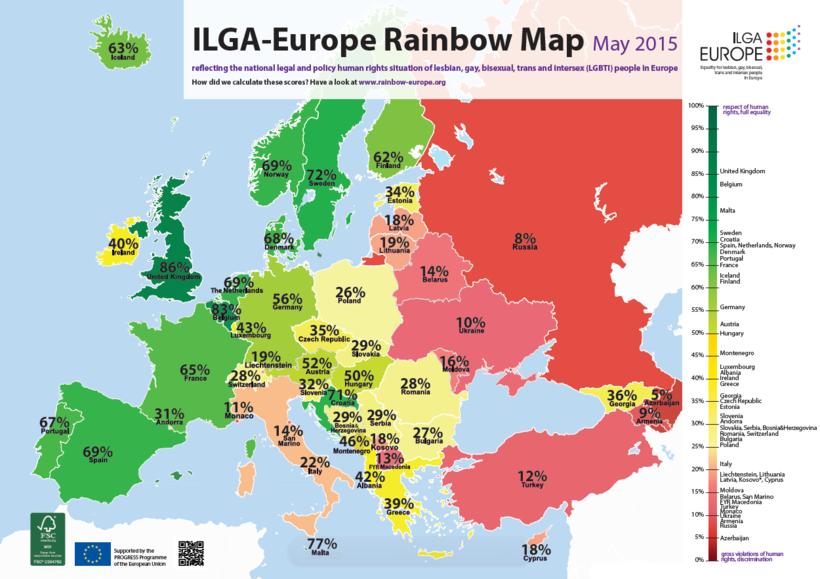 Iceland currently ranks 12th in Europe as regards the human rights situation of lesbian, gay, bisexual, trans and intersex (LGBTI) people, according to a newly published report. This is three places down on last year.

ILGA-Europe is an international non-governmental umbrella organisation working and advocating for equality and human rights for LGBTI people at European level.

The report’s ´Rainbow Europe Index’ assesses the performance of 49 European countries under six wide-ranging categories regarding LGBTI rights. Each country is awarded a total score (%) on the basis of the various measures applied.

Iceland’s score of 63% is one percentage point down on the previous year and places Iceland in 12th place in Europe overall. The list is headed by the United Kingdom (86%), Belgium (83%) and Malta (77%). At the bottom of the classification are Armenia (9%), Russia (8%) and Azerbaijan (5%).

The top climber from the previous year was Malta (20 percentage points, 8 places).

Why is Iceland so ‘low’?

Iceland’s relatively low placing may come as a surprise to those who traditionally see Iceland as a byword for LGBTI rights and tolerance. Annexed to the report is the ‘Rainbow Index’ (see here), which shows the sub-criteria for which Iceland has or has not been credited with confirmed national application. There are several ‘tick’ absences for Iceland under the ‘Equality and non-discrimination’ and ‘Asylum’ categories.

The Iceland ‘country review’ in the main report mentions the State’s permanent ban on gay and bisexual men donating blood and isolated incidents of homophobic violence in 2014.

The full text of the ‘2015 Annual Review’ can be found here.