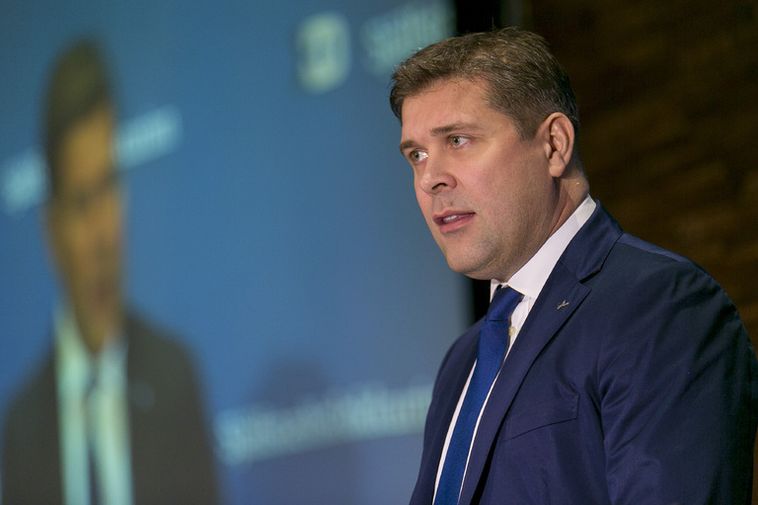 The time has come to clear the table regarding Iceland's application to join the European Union Bjarni Benediktsson, Minister of Finance and chairman of the Independence Party, said in his opening speech yesterday at a party's conference. He stressed that the EU accession talks had come to an end and that EU membership was opposed by both the two government parties, the Independence Party and the Progressive Party, and the majority of the parliament.

Benediktsson had previously, both before the general elections in May 2013 and afterwards, voiced his support for holding a referendum on whether to continue the EU accession talks or not being himself opposed to the idea of joining the bloc. Later on he said such referendum would not take place as the necessary condition was a government and a parliament majority in favour of continuing the process and fighting for the acceptance of an eventual membership treaty. He again stressed these views in his speech hinting that Iceland's EU application would be formally withdrawn during this parliament.

„Referendum on this issue should never be about anything else than whether the Icelandic people want full membership of the EU or not. Fundamental to such a referendum is a majority in the parliament as well as in government willing to shoulder responsibility for the accession talks and finish them with the aim of joining the EU. If these fundamentals are not in place then we will again get the same circus that took place during the last government term,“ he furthermore said.

Benediktsson added that if the country did not have a government that wanted to conclude the EU accession process, support it, finalise an agreement and promise to go home and fight for it then the same waste of time and funds would take place as when the previous government, which applied for EU membership back in 2009, was in power using the term "virtual talks" for the accession process during its watch. "And we are not going to let that game repeat itself," he said.

Iceland better placed outside the EU

Benediktsson furthermore added that all this was only concerned with the formal part of the issue. The main question was where Iceland belonged in the world. "We have reached the clear conclusion over and over again that Iceland's interests are better secured outside the EU. That is our conclusion and to my opinion that conclusion is becoming stronger. That is my honest belief. Not the least in the light of what we have seen happening within the EU in recent years."

He said two things had characterised the debate within the EU in recent years: Greatly increased political integration, both before and after the financial crisis, and deceasing public belief in the EU and growing discontent. "The EU stands in fact on great crossroads, not the least because of the euro. The euro has become an independent source of conflicts between the nation states regarding ways to tackle stagnation, high debts and persistent deficit.“

Benediktsson said the problems of the eurozone were far from solved and that Icelanders should focus on dealing with their own issues and strengthening themselves in the competition with other countries regarding living standards. „We have every possibility to do that.“