The little country that roars 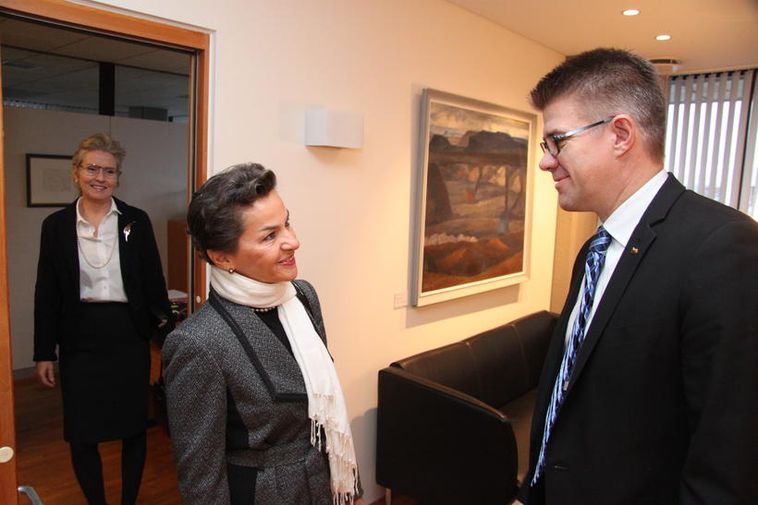 Costa Rican Christiana Figueres, Executive Secretary of the UN Framework Convention on Climate Change is currently in Iceland to take part in the Arctic Circle Summit this weekend. Yesterday she met with Iceland's Foreign Minister Gunnar Bragi Sveinsson and Sigurður Ingi Jóhannsson, Minister for the Environment and of Natural Resources and visited the geothermal plant at Hellisheiði. Figueres was also presented with the results of new research on carbon binding in soil mostly conducted by Icelandic scientists and which has received noteworthy international attention. Figueres also met with pupils of the United Nations school of equal rights and the Icelandic geothermal college.

In her speech at the Arctic Circle Summit Figueres stressed that countries make ambitious plans about carbon reduction in the new global Paris Agreement which is to be signed in February 2015.  In an interview with mbl.is news she said that other countries of the world could look to Iceland with regards to renewable energy. "Many countries have renewable energies, whether it be geothermal, solar or wind energy that are available to them but which they have not exploited to a maximum. I think that Iceland is an inspiration to other countries."

When asked what role the Arctic Circle Summit has in paving a secure future for this region she answers, "What is very inspiring about the Arctic Circle Summit is that it is a very open group of national governments, subnational governments, city leaders, private sector leaders , civil society research institutions, scientists, academics, a very diverse group of people who come together out of a single concern about the health of the Arctic and the health of the planet. So they come from a very different perspective from all corners of the world to be very clear about the fact that whatever happens in the Arctic does not stay in the Arctic, that there are ramifications and effects all throughout the world and that they are concerned and that we should be working together in a collaborative way to stem the greenhouse gas emissions that are the culprit of the melting ice and the permafrost."

But does she think the countries are doing enough? "No country is doing enough. The fact is that its very clear that there's a big gap between what's currently being done and what needs to be done according to science to stay under the two degrees. On the other hand its very impressive that every government is working very hard right now to come to an agreement in Lima and then in Paris on how they are going to collaborate with each other to address climate change. It's also very evident that they recognize that the current total of effort sis not going to be enough but what they first need to do is to establish this framework of how they're going to do it, how theyre going to support each other and they will have to place a much longer term trajectory so that over time we will be able to address climate change."

Ambitious plans on carbon reduction in the Paris Agreement

At the Paris summit in 2015, 196 countries will meet to sign a new climate change agreement. But how likely is it that it will make a difference to climate action on the ground?  "The Paris agreement 2015 will be prepared substantially in Lima, Peru at the end of this year and it will be an agreement that seeks to optimize the efforts of all countries individually first both with respect to adaptation and with respect to mitigation, adapting to the changes we see as well as reducing greenhouse gases so it seeks to optimize all those national efforts but also seeks to maximize collaboration accross countries, how can they work together to meet the global responsability in addition to their national interest."

The summit brings heavyweights together

Figueres says that she is impressed by the Arctic Circle Summit event in Iceland. "Iceland is a relatively small country that is really punching here, way above its weight by the vision of Iceland, its government and the President to call for this Arctic Circle Summit here and to bring all of the heavyweights together here to focus on this very difficult but common challenge of protecting the Arctic and ensuring predictability and safety of the Arctic for the future. I come from a little country also, which also punches above its weight, and I always call my country "The little country that roars". I think Iceland is also proving that it is a little country that roars. "