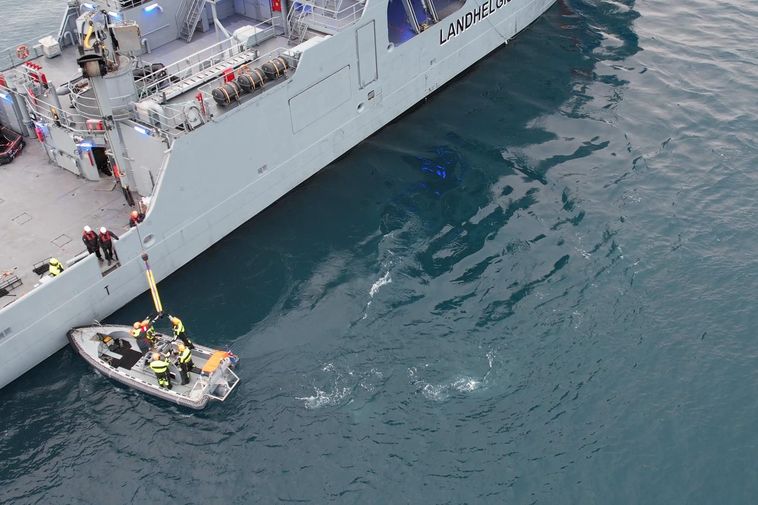 The underwater craft moved to the rescue boat of the Coast Guard vessel Þór before it was put under water for the search. Photo/Iceladic Coast Guard

An underwater craft was searching all night and until ten o’clock yesterday morning for Ekasit Thasaphong, which fell off the liner Sighvati GK-57 off the Garðskagi peninsula on Saturday.

According to Ásgeir Erlendsson, the information officer of the Icelandic Coast Guard, the data obtained from the search is now being reviewed. “This craft was passed through the area where it is believed that the man fell overboard and is equipped with a side sonar device that maps the bottom of the area. The data is being examined now and it will take some time,” Ásgeir tells mbl.is.

The patrol vessel Þór is now leaving the search area and heading to Reykjavík while the data is being reviewed, but a decision on the next steps in the search has not been made.

Provides rough representation of irregularities in the seafloor

The underwater craft was launched at the second hour yesterday and the search lasted all day yesterday, yesterday evening and night and until the craft was taken out of the water at ten o’clock this morning.

The instrument is equipped with the aforementioned lateral sonar and can be used to image the seafloor with a camera, but the information gained should give a rough picture of the irregularities in the sediment and other features of the environment.

The search area is about 25 nautical miles northwest of Garðskagi.