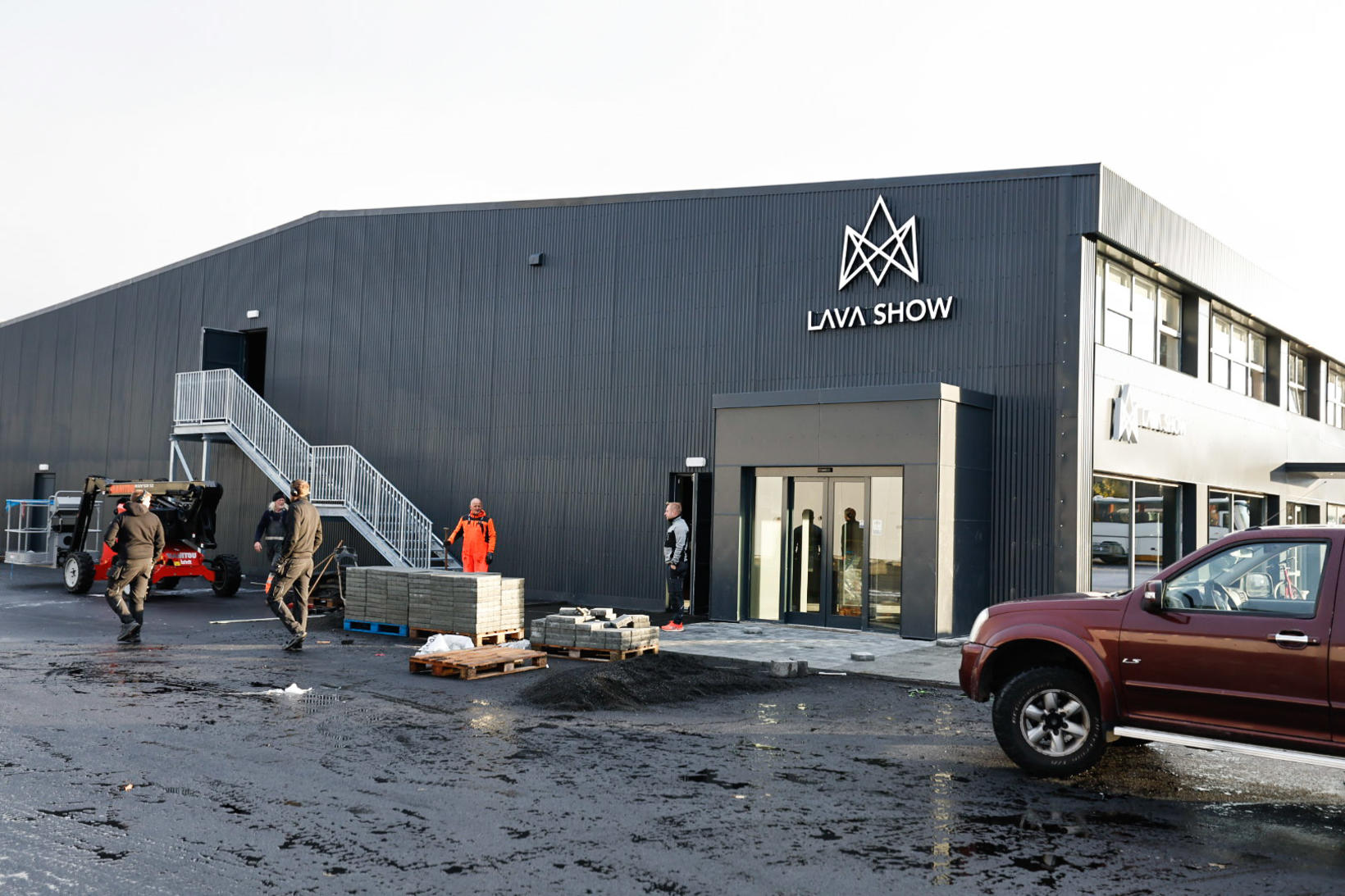 The fire had been put out this morning, but it took 25 firefighters four hours last night. mbl.is/Eggert Jóhannesson

A commercial building in Fiskislóð in Grandi in the western part of Reykjavík caught fire last night. The Fire Department was contacted at 3:22 AM and the building in question houses The Lava Show, but according to Jónas Árnason, warden of the Fire Department, the house is in bad shape and parts of the roof needed to be torn down. The cause of the fire is thought to be a chimney that connects to a furnace that is used in the show.

According to Árnason the Fire Department was successful in putting out the fire, although it took four hours and didn’t end until this morning. "At the end we were simply going over everything to make sure no fire embers were left." 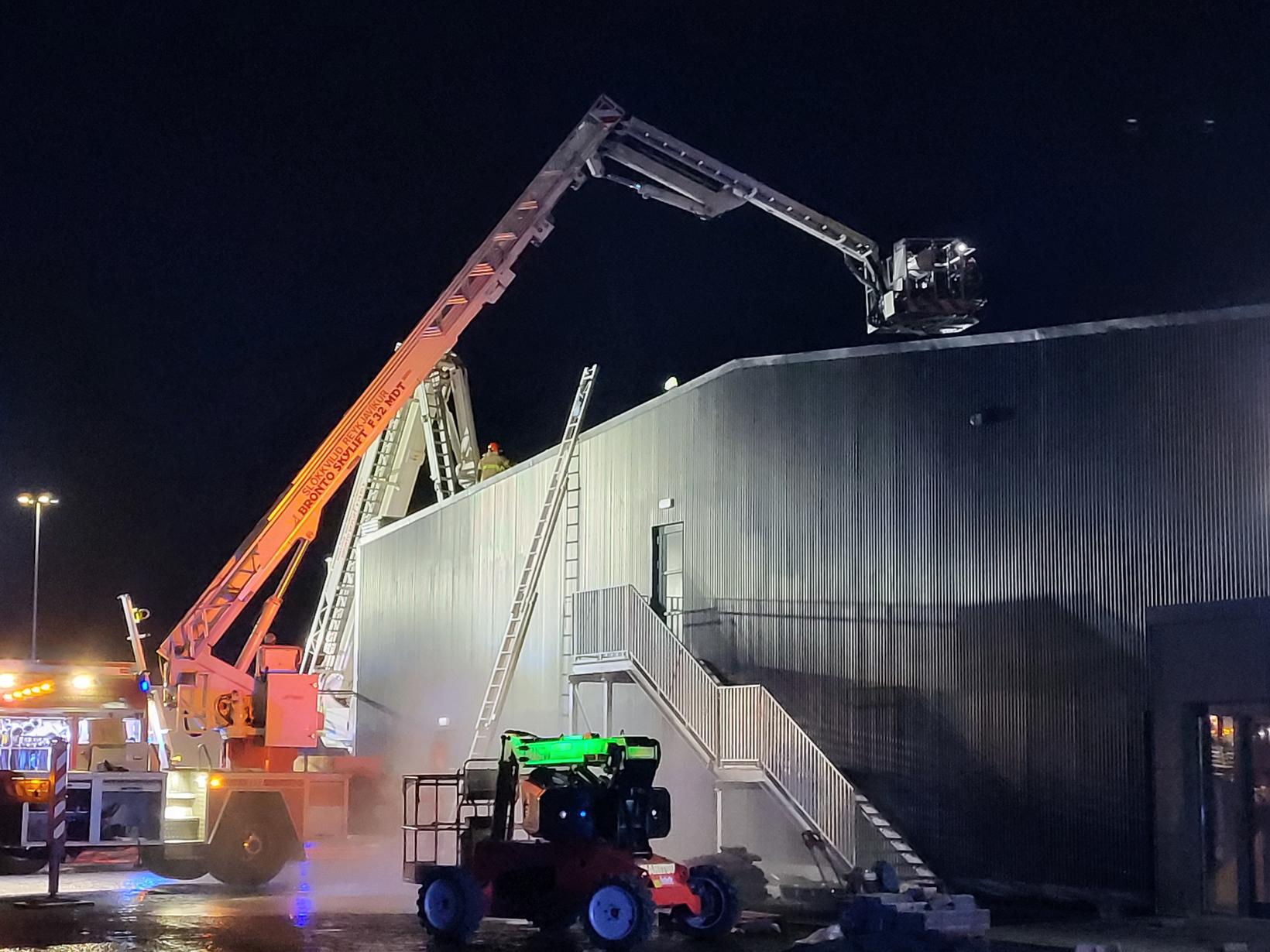 It was dark when the Fire Department was called out in the middle of the night and started to put out the fire.

He says that when the call came to the Fire Department last night, there was already fire on the roof. “There were two workers trying out a furnace that melts lava and there which generates an immense heat,” says Ari Jóhannes Hauksson, warden of the Fire Department. “Part of the roof was on fire and we needed to tear it off around the chimney, perhaps 20 square meters,” Hauksson says, but 25 firefighters were on the premises battling the fire.

He says that the work went well and the fire did not spread and it looks like not a lot of smoke got into the building itself. He says the roof seems is where most of the damage was done, although there will always be smoke and water damage in a burning building. “But thankfully, it was not a lot this time.”

Still in shock but grateful that no one was hurt

“We have been running this business for four years in Vík and know the procedure well, but in this instance it looks like the chimney couldn’t withstand the heat and that it caught fire,” Ragnhildur Ágústsdóttir, one of the owners of the Lava Show says. Her husband, and managing director of the company, Júlíus Ingi Jónsson, was in the building with another man testing the furnace when the fire came up last night.

"Our chief melting master, Maksymilian Kaczmarek, was with my husband when the fire started and they were by the furnace and managed to call the Fire Department immediately and they came  within minutes. The fire was in and around the chimney and did not spread too much," she says and says that in all of this there is a silver lining, because now they know how the safety issues work in this building, but they were just starting to set up the business in Reykjavík. 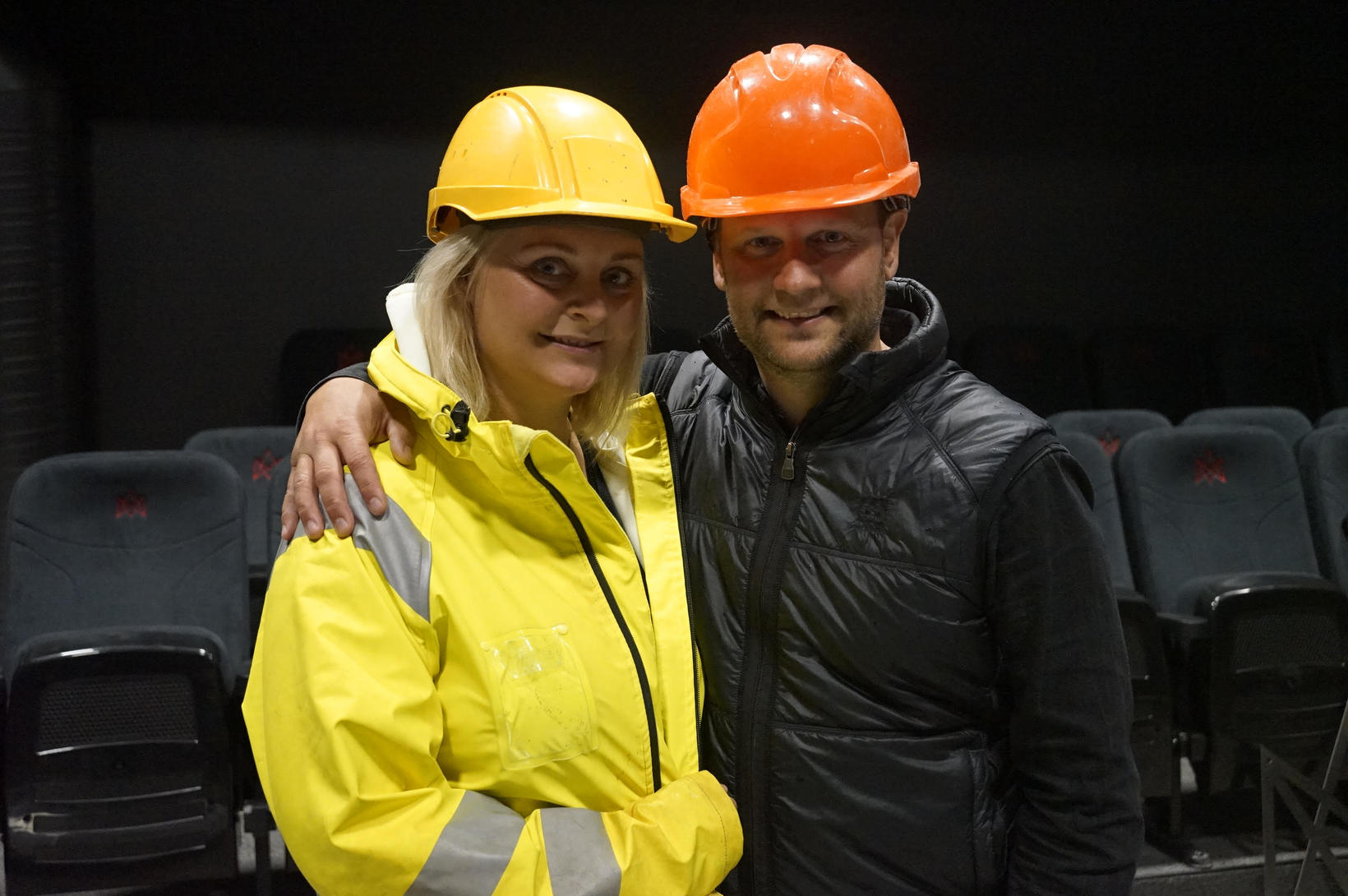 Ragnhildur Ágústsdóttir and Júlíus Ingi Jónsson, the owners of The Lava Show. They try to be upbeat and hope the fire does not postpone their opening of their business for too long. Photograph/Sent to mbl.is

"It was really shocking when this happened, but the damage is minimal inside the building and all the equipment seems to work. What is most important, however, is that nobody got hurt and that is what matters the most. Of course, this is a shock, when we were just in the phase of opening up the business in this new location, but we have to be positive and see that we got a security check and now we know what needs fixing, so we are happy this happened before we opened the show for the public."

She says that they have four years experience of melting lava in Vík in Mýrdal and that the staff is experienced and the whole process has been tested. "I just hope everything goes well and that we can soon start melting lava for guests in Reykjavík shortly." 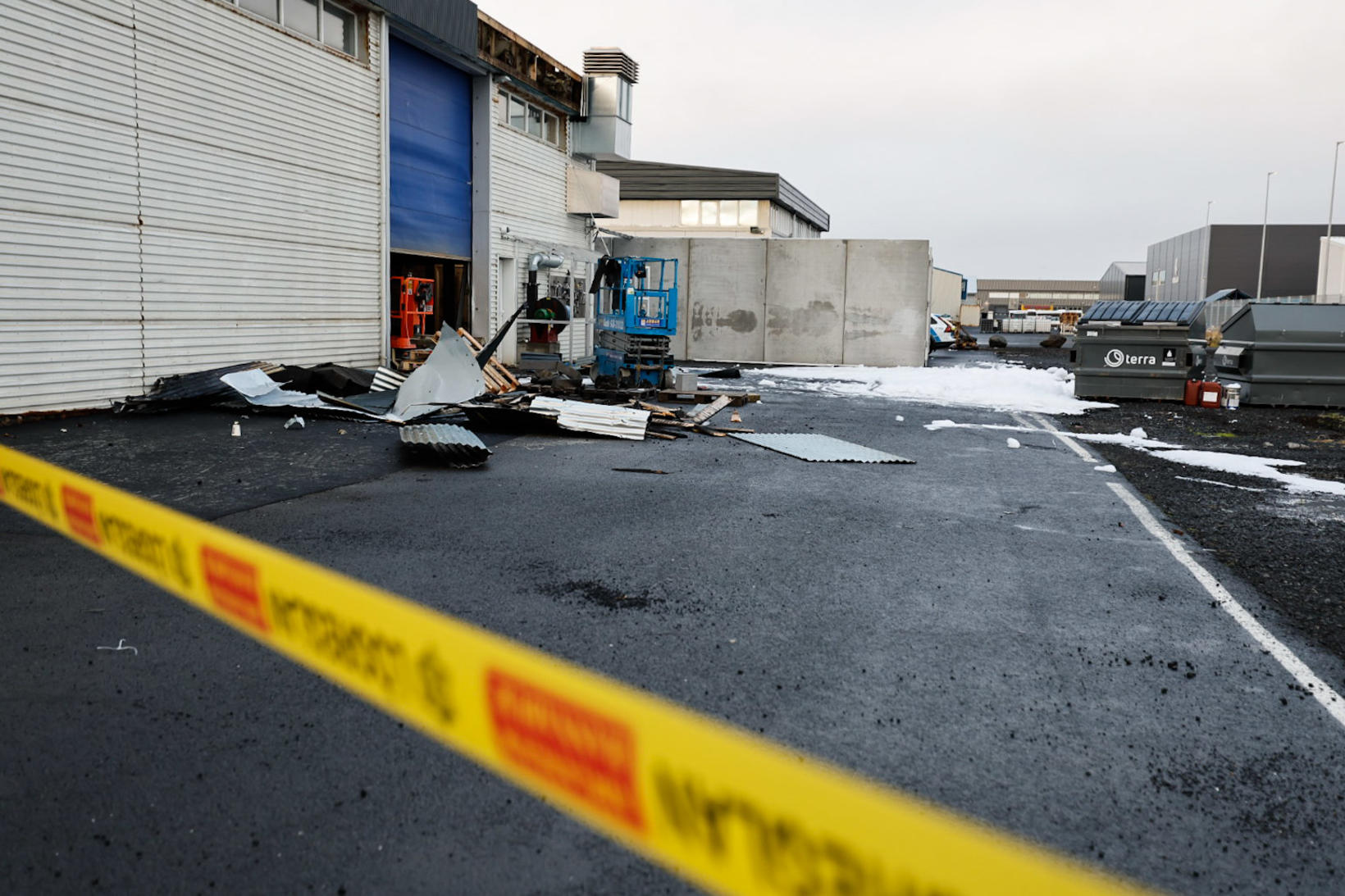 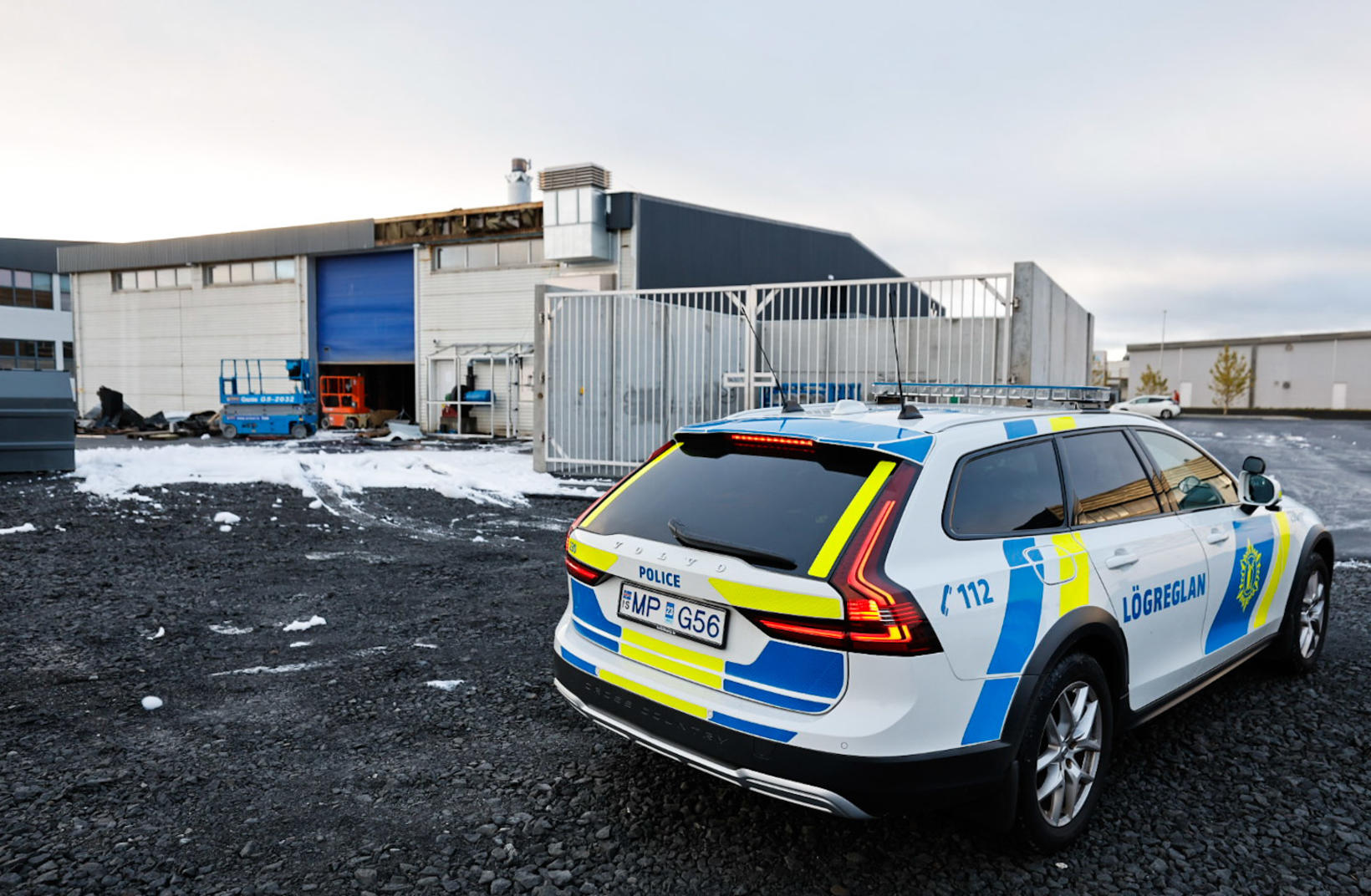