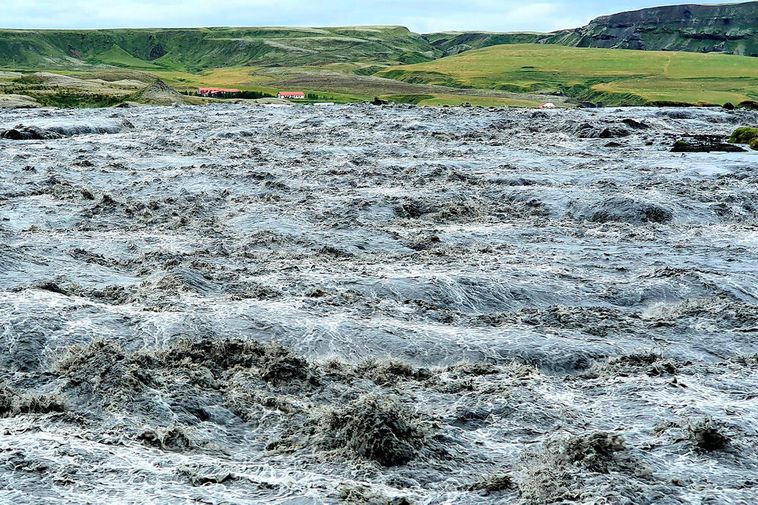 The glacial outburst flood, a.k.a. jökulhlaup, in Skaftá river, South Iceland, continues, and the situation is being closely monitored. The ice cap over the Eastern Skaftárketill cauldron in Vatnajökull glacier, where the flood originates, has sunk more than 60 meters (about 200 ft), and the discharge in Skaftá river has exceeded 500 m3 per second, mbl.is reports.

The discharge by Sveinstindur mountain was stable overnight, but had begun increasing again this morning. The flood is expected to peak tomorrow.

According to the Icelandic Met Office, the latest data indicate that the maximum discharge of this flood will be less than that of the 2015 and 2018 floods. In 2018, the discharge exceeded 2,000 m3 per second.

Despite that, measurements indicate that the amount of water from the Eastern cauldron will exceed that of 2018. In other words, the flood’s impact on inhabited areas could be similar to what occurred in 2018, even though the maximum discharge will be less than what it was then.

In addition, the area is saturated with water, following a recent flood from the Western Skaftárketill cauldron and heavy rain in recent days. This will likely increase the spread of the flood.

Several mountain roads near Skaftá river were closed last night, and the police sent travelers in the area text messages, asking them to leave. Travelers need to be aware that hydrogen sulphide pollution, which can be harmful to the mucous membranes of the respiratory system and eyes, can accompany the flood.

In case the Ring Road will be closed, due to the flood, there will be a detour through the Meðalland region.

Fanney Ásgeirsdóttir,  Park Manager of the Western region of Vatnajökull National Park, advises travelers to avoid the area today, due to the flood. “We’ve put up warning signs, and we inform travelers at the information centers,” she states.

The following video was posted last night by the South Iceland Volcanology and Natural Disaster Team on Facebook. It shows the flood in Skaftá river: