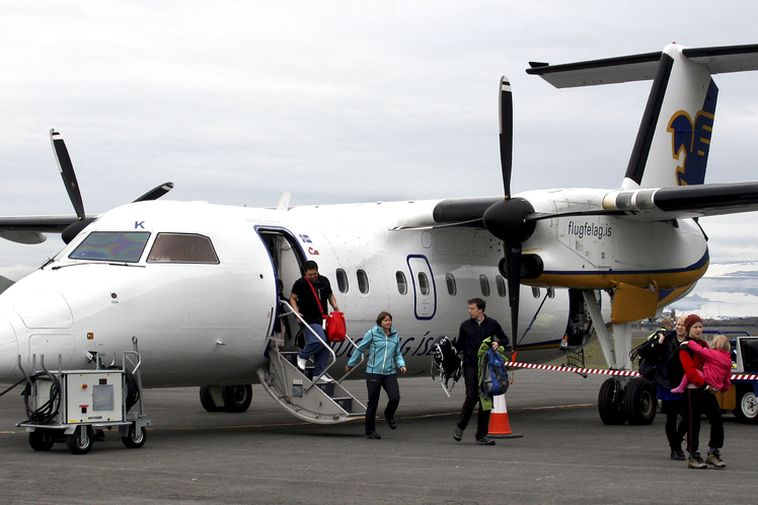 Passengers disembark from an Air Iceland branded Dash 8-300. Retrofitting these planes to run on hydrogen would be an interesting possibility. mbl.is/Sigurður Bogi Sævarsson

Icelandair Group has made preliminary deals with both Universal Hydrogen and Heart Aerospace with the goal of using planes fuelled by hydrogen and/or electricity on domestic routes.

Universal Hydrogen has developed a technology that could be used to retrofit Icelandair‘s Dash-8 passenger planes to have them run on hydrogen while Heart Aerospace plans to build passenger aircraft that will run on electricity, Mbl.is reports.

A news release from Icelandair Group states that in order to reach global goals for CO2 emissions more environmentally friendly solutions for air travel have to be introduced as quickly as possible.

The airline says that short domestic flight routes and good access to electricity generated using renewable sources make Iceland an ideal location for transitioning to cleaner energy. Doing so would also be in line with the goals of the Icelandic government with regards to creating a more sustainable tourism industry.

The next steps will involve further research and analysis in collaboration with Heart Aerospace and Universal Hydrogen, while also involving electricity and hydrogen producers, transportation companies and airport operators.

In 2021 Air Iceland Connect, Iceland‘s regional airline, merged with Icelandair. The airline offers flights from Reykjavík to the towns of Akureyri, Egilsstaðir, Vestmannaeyjar and Ísafjörður as well as flights to destinations in Greenland.

The shortest domestic route Icelandair offers is a 20 minute flight between Reykjavík and Vestmannaeyjar. The flight to Egilsstaðir is the longest, spanning about 380 km and taking passengers to their destination in around one hour. ai@mbl.is