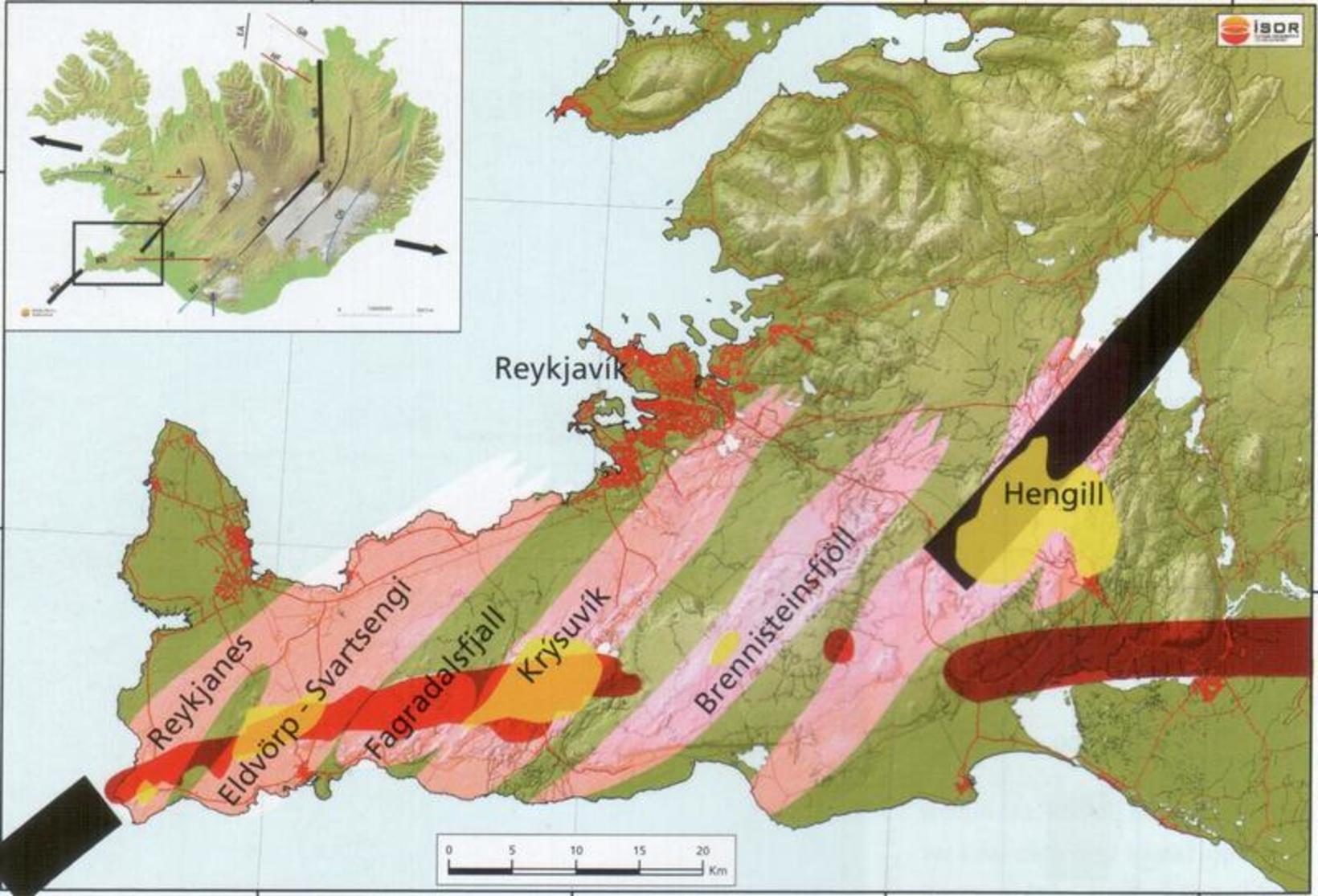 “If an eruption occurs, it would likely mark the beginning of such a [volcanic] period – lasting a few centuries, I believe,” states Magnús Á. Sigurgeirsson, geologist at ÍSOR Iceland GeoSurvey - a consulting and research institute in the field of geothermal sciences and utilization.

“That’s at least how it has been the past three times, and even dating further back, but we don’t have as exact data available on that,” he tells mbl.is . He is referring to the uncertainty regarding whether an eruption can be expected soon on the Reykjanes peninsula, Southwest Iceland. 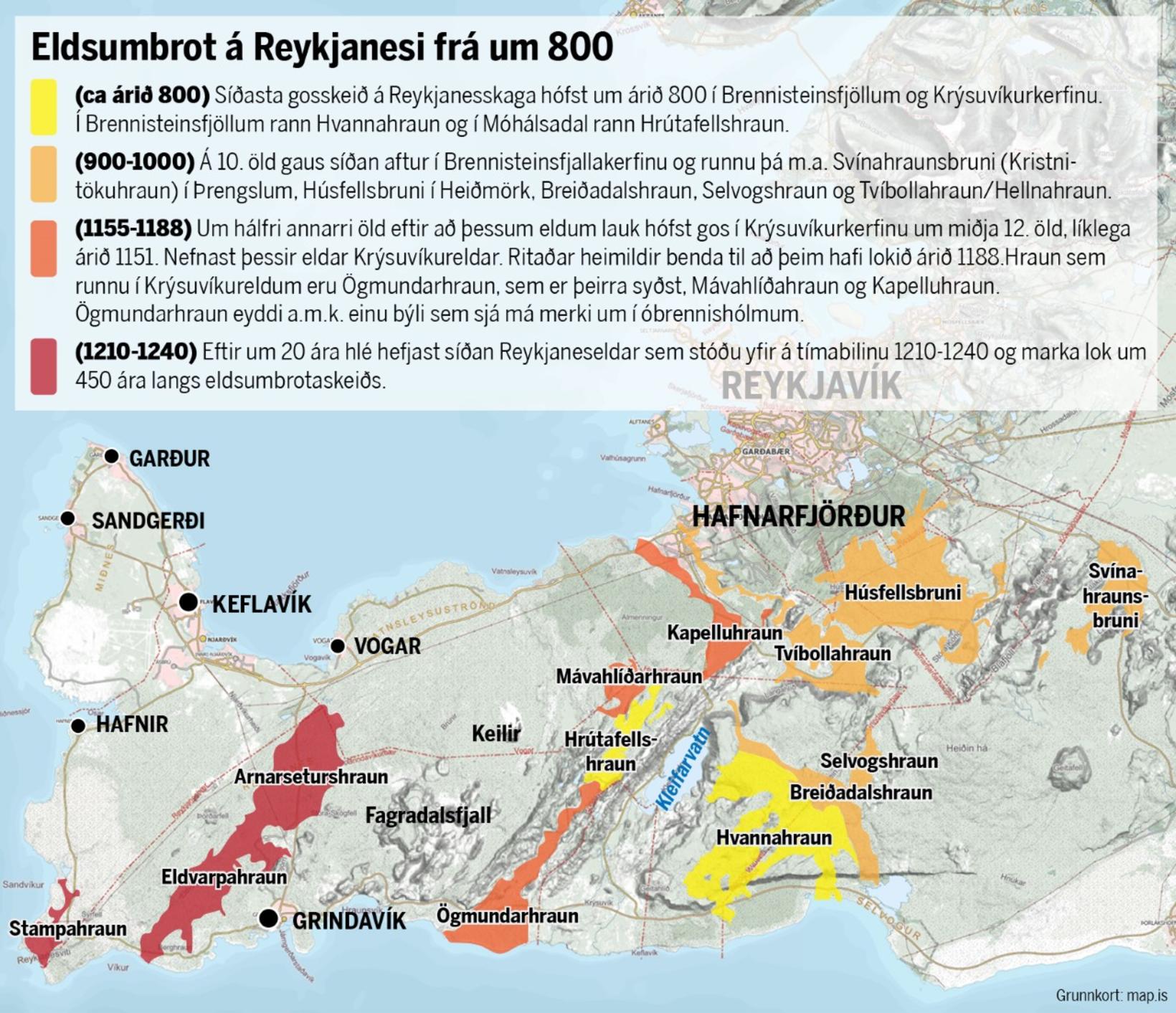 Although the list of eruptions is in Icelandic, you can see the dates of the eruptions and the corresponding lava fields. Graphic/mbl.is


Magnús assembled data on the past three volcanic periods in the area. These were 3,000-3,500 years ago, 1,900-2,400 years ago, and finally between the years 800 and 1240 AD. His information is based on geological maps of the Reykjanes peninsula and on a comprehensive book on volcanic eruptions in Iceland called Nátt­úru­vá á Íslandi, eld­gos og jarðskjálft­ar.

Research reveals that during the latter part of Holocene – a term used to describe a period that began about 11,700 years ago – the volcanic systems on the Reykjanes peninsula have erupted every 900 to 1100 years. Less is known about the first part of Holocene. 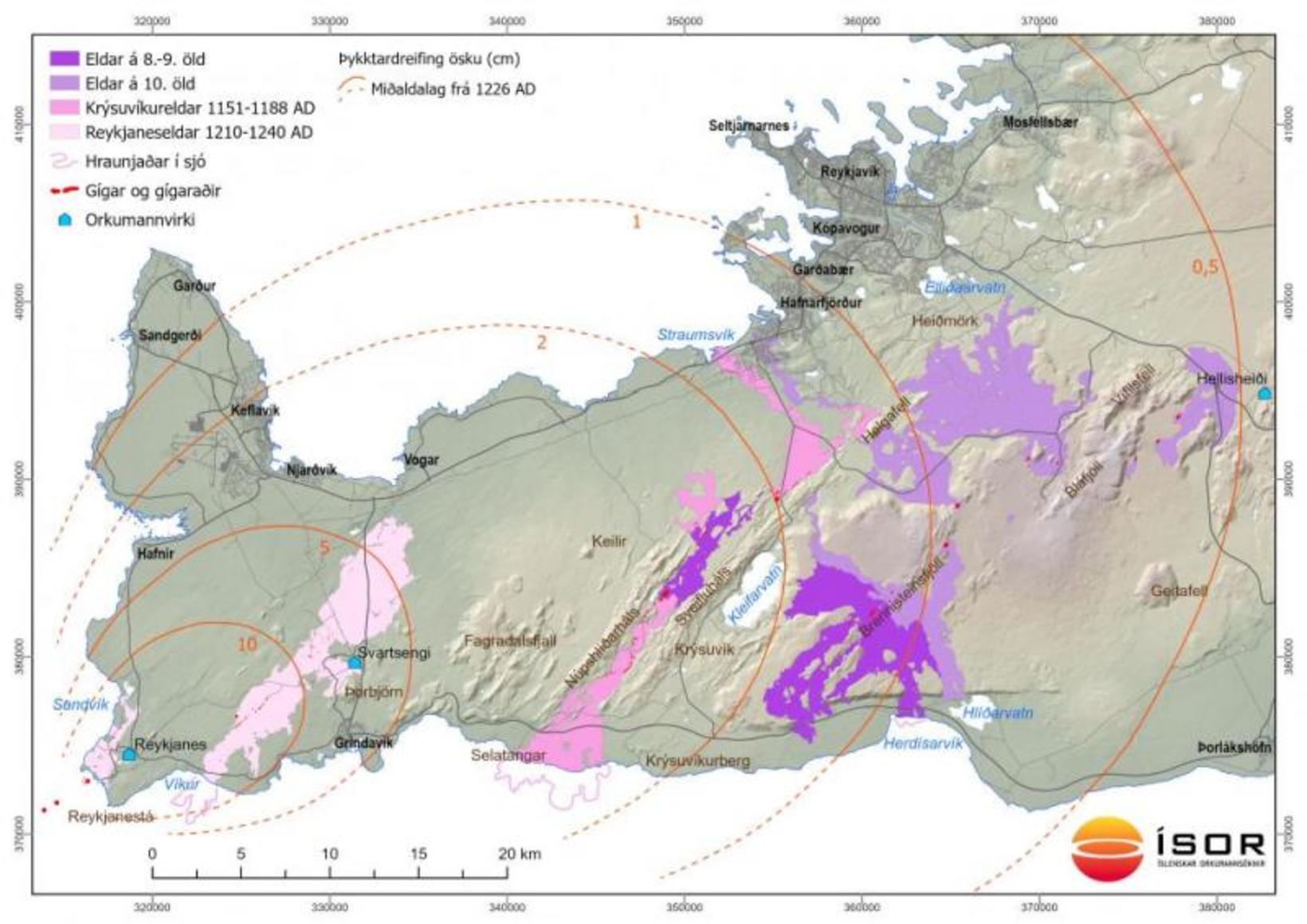 The map shows lava fields from the last volcanic period on the Reykjanes peninsula 800-1240 AD. Map/ÍSOR

Each eruption period appears to have lasted about 500 years, and during that time most of the volcanic systems appear to have been active, albeit generally not simultaneously. The volcanic activity is characterized by eruptions that each last a few decades. Lava flows from volcanic fissures that can be as long as 12 km (7.5 mi).

On the Reykjanes peninsula, there are six volcanic systems, lined up side by side, pointing from southwest to northeast. Farthest west is that of Reykjanes, then those of Svartsengi, Fagradalsfjall mountain, Krýsuvík, Brennisteinsfjöll mountains and, finally, Hengill mountain.

The last volcanic period began around the year 800 in Brennisteinsfjöll mountains and in the Krýsuvík system, creating the lava fields of Hvammahraun and Hrútafellshraun.

During the tenth century, the Brennisteinsfjöll system erupted again, creating at least five different lava fields. This was followed by a 150-year-long break in volcanic activity. Then, most likely in 1151, an eruption began in the Krýsuvík volcanic system. According to written sources, it ended in 1188. Three lava fields resulted.

What followed was a 20-year break in volcanic activity. Finally, in 1210, an eruption began near the ocean, a short distance north of Valahnúkur peak on Reykjanes point (the westernmost part of the Reykjanes peninsula). It lasted until 1240, marking the end of 450 years of volcanic activity – which did include long breaks from eruptions in between.