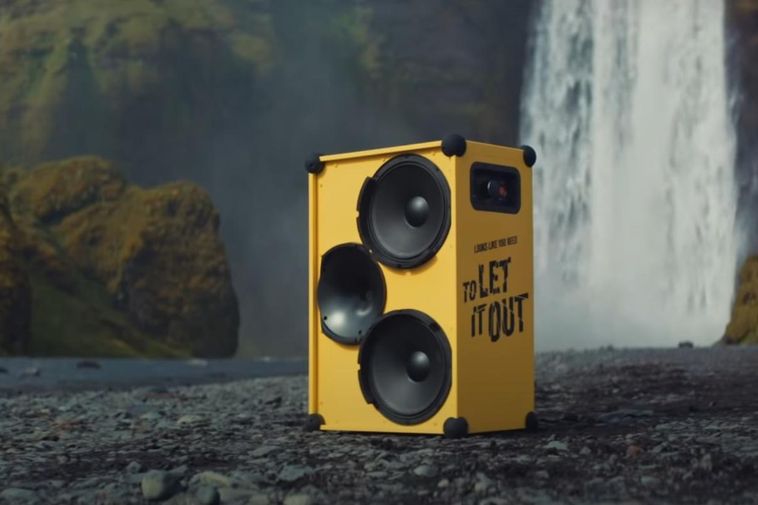 Yellow speakers around the country now play the sounds of people screaming. Screenshot from the Let It Out videoclip
Ásgeir Ingvarsson
ai@mbl.is

A new campaign from Inspired by Iceland invites the stressed-out, homebound public of all countries to scream at Icelandic natural wonders.

With “Let It Out” people are asked to record their scream using the LooksLikeYouNeedIceland.com website and the noise will subsequently be played through loudspeakers in the vicinity of beautiful waterfalls, black beaches and magnificent glaciers.

A total of seven speakers have been scattered throughout the Island in pristine and quiet places like at the base of Snæfellsjökull glacier and by the Skógarfoss waterfall. Those who participate will receive a video clip showing the moment their scream was played.

According to Mbl.is the screams should not disturb people currently exploring the country as the volume setting of the speakers has been set to a reasonable level.

The campaign aims to take advantage of a supposed positive psychological and stress-reducing effect that comes from letting out a loud scream. In a survey conducted for Inspired by Iceland in other countries some 40% of the respondents reported feeling symptoms of stress due to Covid-19 and 37% said that the current condition of the world was having a detrimental effect on their mental wellbeing.

Many Icelanders took to social media to express their displeasure with the approach used by the campaign, with some calling it silly and out of touch with Icelandic reality. Others worry that the sounds emanating from the speakers will spoil the calm and quiet that makes Icelandic nature so appealing, with some even threatening to simply switch the speakers off if they create a nuisance.