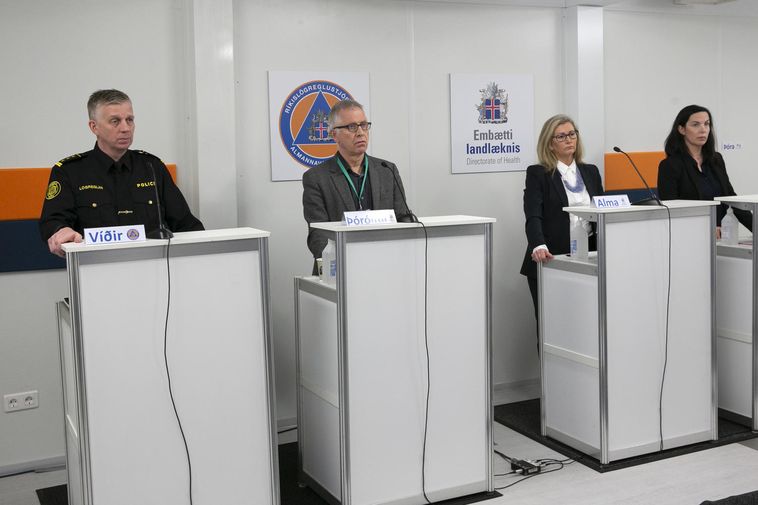 The latest figures regarding the spread of COVID-19 in Iceland show that 409 cases of the disease have been confirmed. Seventy-nine new cases were confirmed yesterday – a similar number as the previous day.

The figures reported daily include cases confirmed through the screening intiative of deCode Genetics.

At a press conference today, Chief Epidemiologist Þórólfur Guðnason stated that a total of 4,166 people are in quarantine and 409 in isolation. Six people are hospitalized, one of them in critical care.

The number of samples that have been analyzed is 9,189. Seventeen people have recovered fully.

People who have had samples analyzed are asked to stay in isolation until the results of their tests are in.

Director of Health Alma Möller statet at the conference that according to the latest predictions, which could very well change, the pandemic could reach a peak in Iceland during the first week of April. By that time, the total number of confirmed COVID-19 cases in Iceland could have reached 600. A worst case scenario would be 1,200 confirmed cases by the first week of April.

At a press conference yesterday, Alma stated that an autopsy of the Australian tourist who died in Húsavík, North Iceland, Tuesday, shortly after being admitted there seriously ill, showed signs of pneumonia. She stated that although these were only preliminary results of the autopsy, the fact that pneumonia was present suggested that the man had died of COVID-19.

Close to 500 health care workers, who are not currently employed by Landspítali, have registered on a website, opened March 11, for people willing to work in healthcare, should their services be needed. These include, doctors, nurses, nursing assistants, and pharmacologists.

A team of 16 health care workers and 22 police officers works every day on tracing the origin of new infections, so that people who need to be quarantined can be contacted.

For the latest figures, visit covid.is, where you can also find answers to frequently asked questions.

The report has been updated.