Why are we even learning this thing? 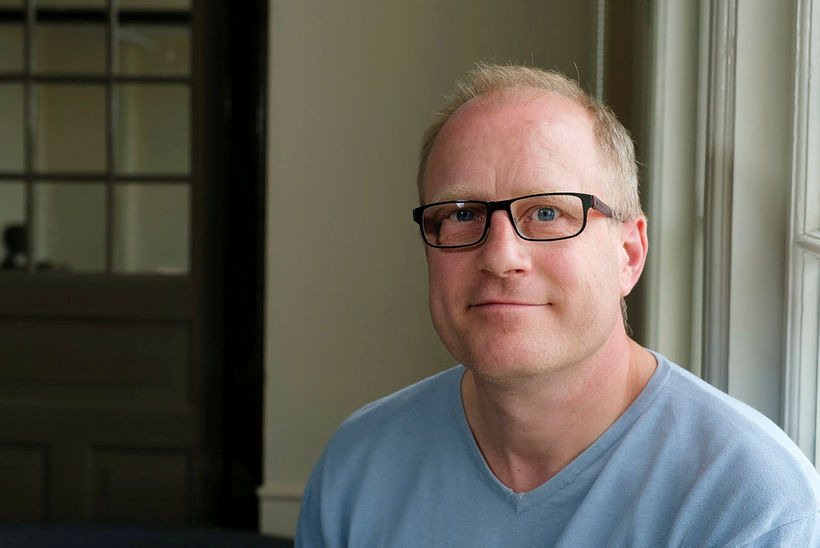 Tomas Højgaard, professor in mathematics education, led the reform on the Danish curriculum in mathematics. His idead have shaped not only Danish teachers but teachers from all over the world, including Iceland. mbl.is/Kristinn Magnússon

"If you don't have the feeling that you are empowered in basic math then you are, in a way, cut away from central aspects in the life of a democratic society.“ Tomas Højgaard, professor in mathematic education at Aarhus University in Denmark, says.

He is in Iceland to participate in a conference on teaching methods that will take place today in Reykjavík Library at Tryggvagata. The conference is part of a joint project between Icelandic, Danish and Finnish teachers and brings an end to a two-year cooperation between the neighbouring countries, organized under Erasmus+, the European Union's programme for education.

Højgaard says that the democratic justification for teaching math in primary and secondary schools is one of the most important, and perhaps the one most overlooked. "Our society is so technical and it relies heavily on math," he says and mentions taxation arrangements, budgeting and the vast amount of data people are exposed to every single day.

"The Nordic democratic society is built upon people being autonomous individuals who are empowered to have an opinion. To make that useful people should understand things around them and the way their lives are shaped; math is a major aspect of that," Højgaard says, adding that if people don't understand the math behind decisions, they are less likely to question them, thinking "I will never understand that. I just have to accept it." 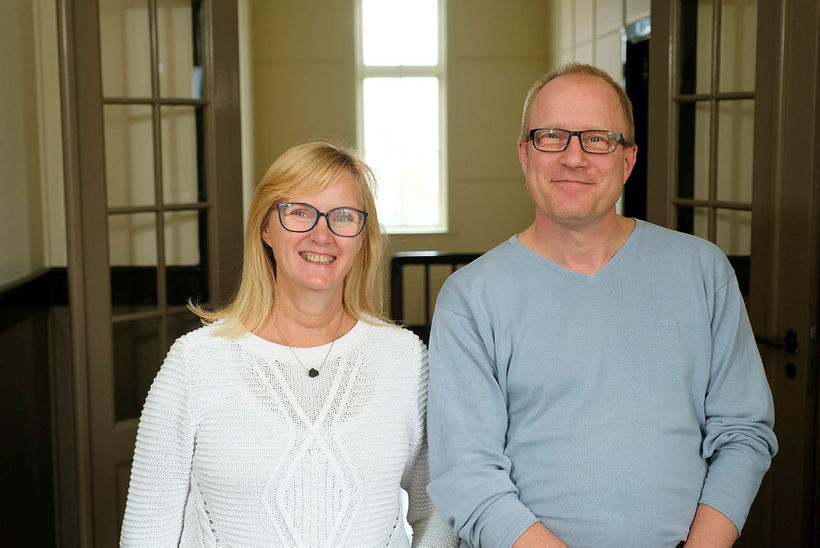 Tom­as Højga­ard and Ásdís Ing­ólfs­dótt­ir, teacher in Kvennaskólinn High School, are among participants in the conference that brings an end to a two-year cooperation between Icelandic, Danish and Finnish teachers organized under Erasmus+, the EU's programme for education. mbl.is/Kristinn Magnússon

Bringing math back to life – back to reality

In the beginning of the millennium the Danish political and academic community were taken by surprise, and an unwelcome one, when results from the math section of PISA, the standardized test conducted in all OECD countries, were in.

How could it be that the Danish education system, one of the best funded in the world, was so bad at teaching kids basic math? This is a question that many Icelanders have no doubt pondered. To fight back, Danes made radical changes to the curriculum. Tomas Højgaard led the work and his vision has guided Danish math teachers ever since.

Højgaard believes it is important to show math students that what they learn is indeed useful in everyday life, and not only meant to help them pass the next exam. To this end, he says we need new methods with increased focus on what he calls mathematical modeling.

Mathematics education is often criticized for lacking connection to reality. Students spend an awful lot of time training certain pre-determined methods, such as solving specific types of equations, but there is often less room to reflect on why they are doing it in the first place. 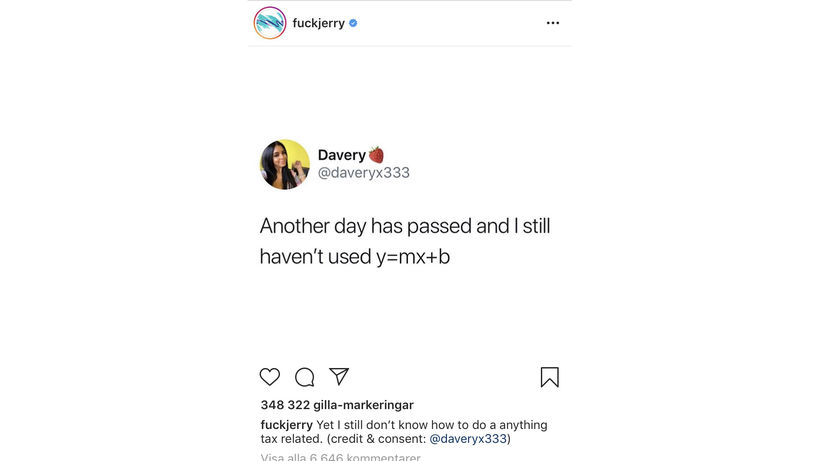 The contributers to Fuck Jerry, one of the internet's most popular meme site, have found little use for the equation of a line in the plane. Many share that feeling. Skjáskot/Instagram

"There is little use in knowing how to solve equations, if you cannot formulate it yourself when facing real-life problems," Højgaard says. For years he has taught teachers of the future and additionally worked with students in both primary and secondary schools.

"My message to teachers is simple: We've got to teach what we want students to learn," Højgaard says. This is nonetheless one of the greatest discovery in field of modern mathematics education.

Earlier ideas revolved around teaching students methods for calculation and how to solve equation, believing that this would make students qualified to face the real world. "But it's only in the classroom that you are given an equation."

Needless to say, standard methods are important and must be taught in the classroom, but Højgaard believes it is equally important to give students some freedom to make use of their knowledge in different scenarios. Not only by solving examples with the method taught on the previous page of the textbook.

A typical math problem in middle school could look like this: A toothpaste tube contains 100 milliliters. Every time you brush your teeth you need half a milliliter. Tom, Dick and their two sons all brush their teeth twice a day. How many tubes do they need a year?

Reality is seldom so straight-forward. Højgaard has put forward ideas on how to train students to discuss problems relating to mathematics and come up with their own formulas relating to their surroundings and the community as a whole.

For instance a teacher could in class pose the question: How many tubes of toothpaste do you think a family uses per year?

Students discuss it amongst themselves and in doing so come across the variables that are hidden in the question. How big is the family? What is the size of a toothpaste tube? How often do family members brush their teeth and how on Earth do I measure the amount of toothpaste people use each time?

The assumptions themselves do not really matter, only that students become aware of how they relate to the answer of the question. After some thought the students agree on the answer.

Given the original assumptions, the family of four will use 14.6 tubes per year, but readers can entertain themselves by inserting relevant values for their own family into the equation. 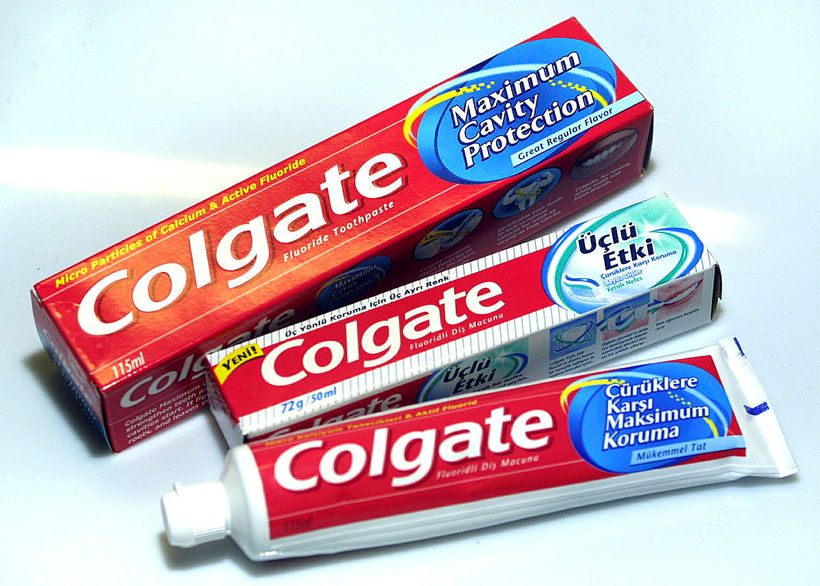 4.7 is the amount of tubes the reporter believes his home, consisting of himself alone, uses per year. mbl.is/Jim Smart

Højgaard admits that those methods are trickier for teachers and perhaps that explains why traditional methods of teaching mathematics have ruled classrooms all over the world for so long. "I f you teach traditional methods then the teacher is by far the expert compared to the student, so the risk of you as a teacher being taken by surprise or the students doing something you didn't expect are low," Højgaard says.

On the other hand teachers that ask their pupils to come up with their own ways of solving a problem and tell them they will follow along the way, must be prepared for things to take an unexpected turn. "Maybe they do something you don't expect and wouldn't have done yourself and you've got to cope with the feeling that you're not in charge. This is challenging for teachers because they are not used to being put in that situation."