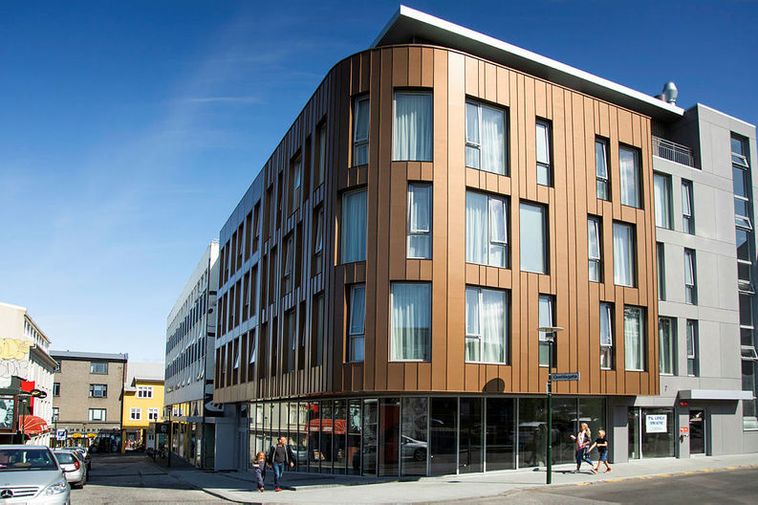 By the end of the year, 520 hotel rooms will have been added to the Reykjavík hotel market since June, Morgunblaðið reports. Assuming that the cost of construction of each hotel room in the city center is ISK 25 million (USD 205,000; EUR 184,000), this is an investment amounting to ISK 13 billion (USD 107 million; EUR 95.5 million). By comparison, the city’s largest hotel, Foss Hotel, has 320 rooms.

On top of the 520 new hotel rooms, at least 51 hotel apartments will be added in the city.

Outside Reykjavík, the opening of a 150-room Marriott hotel by Keflavík International Airport is planned by the end of December.

Following is a list of new hotel construction in Reykjavík:

Just over a month ago, a new 38-room hotel building opened at Vegamótastígur 7-9. The building is rented by the hotel A Room with a View.

Oddsson Hotel at Grensásvegur16a opened in June as well. It includes 77 hotel rooms.

The seventh hotel of the Center Hotel chain is scheduled to open at Laugavegur 95-99 August 1. It has 102 rooms. The plan is to open two restaurants on the hotel’s ground floor in mid-August. The hotel chain intends to open its 8th hotel, including 153 rooms, at the end of the year on the Héðinsreitur lot. Besides, 54 rooms were added to Center Hotel Plaza earlier this summer.

At Laugavegur 55, the 52-room Von Guldsmeden Hotel is being furnished. It is expected to be completed in September.

Across the street, at Laugavegur 56, 16 hotel apartments, owned by Reykjavík Apartments, will be ready in October.

On Bríetartún, 35 hotel apartments came into use at the beginning of summer.

A new hotel is planned to open at Skipholt 29a by the end of the year, with 44 rooms and a Japanese restaurant.

Jóhannes Þór Skúlason, CEO of the Icelandic Travel Industry Association, expects demand for hotel rooms to increase, following increased supply. Until equilibrium is reached, increased competition could lead to better deals for customers. He notes that Copenhagen is experiencing a similar situation and stresses that the supply of flights to Iceland will greatly affect how long this adjustment period lasts.