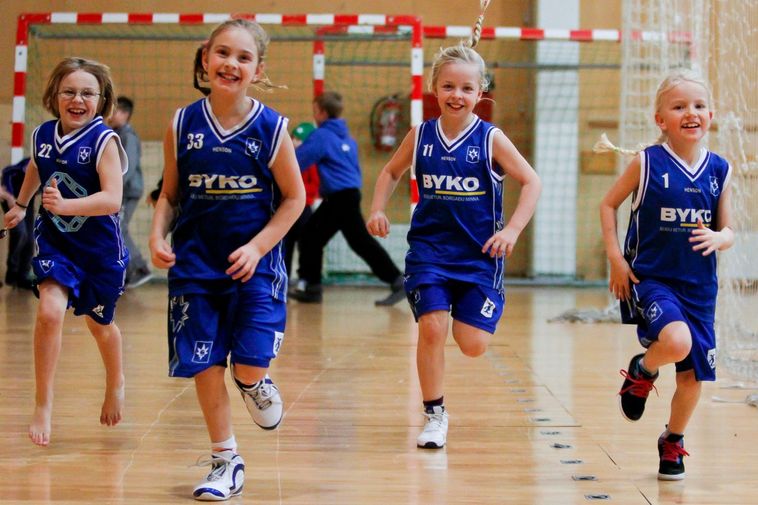 Archive photo. The girls in the photo are not related to the subject of article. Eva Björk Ægisdóttir
Vala Hafstað
vala@mbl.is

Eleven-year-old national basketball champions are in the news for protesting inequality by declining their trophy.

The girls, who became national basketball champions in their age group in Iceland Monday, took off their gold medals, left them on the floor, and walked out, refusing to accept the trophy, Vísir reports. The incident happened in Akureyri, North Iceland, following their final game, but the girls belong to ÍR, the Reykjavík Athletic Association.

Once the gold medals had been given to the girls, the music in the building was silenced and one of the girls read a statement, saying that the team members refused to accept the medals from the Icelandic Basketball Association, KKÍ, because they were never once allowed to play against boys all winter. Such a request had been made by the team, but not granted. Once the statement had been read, the girls took off their medals, placed them on the floor and walked out.

The action did not please their parents, some of whom subsequently took their daughters off the team. An argument between parents and the girls’ coach ensued.

Following the incident, the girls wrote a letter Tuesday, explaining their stance and emphasizing that the idea not to accept the trophy was their own, not that of their coach, Brynjar Karl Sigurðsson, whom they love. They criticized parents for taking their daughters off the team.

“It irritates us that KKÍ should disregard and disrespect us, and we need to do something about it. Perhaps we crossed the line, but now we know where the line is drawn.

P.S.  Article 12 of the United Nation’s Convention on the Rigts of the Child.”

The article referred to states,

“1. States Parties shall assure to the child who is capable of forming his or her own views the right to express those views freely in all matters affecting the child, the views of the child being given due weight in accordance with the age and maturity of the child.

2. For this purpose, the child shall in particular be provided the opportunity to be heard in any judicial and administrative proceedings affecting the child, either directly, or through a representative or an appropriate body, in a manner consistent with the procedural rules of national law.”

The child-friendly version sounds like this: “You have the right to an opinion and for it to be listened to and taken seriously.”

At a meeting, attended by basketball officials, the girls’ coach and parents, which lasted until 1 am yesterday, the decision was made to have Brynjar Karl step aside as the team’s coach. ÍR, the Reykjavík Athletic Association, believes the coaching team must accept responsibility for the incident and, therefore, the coach is to step aside.

“[N]ot accepting the award the team had earned does not comply with the rules of ÍR’s basketball division, where respect and politeness must always come first, under any circumstance,” a statement from ÍR reads. A new coach will be hired for the team.