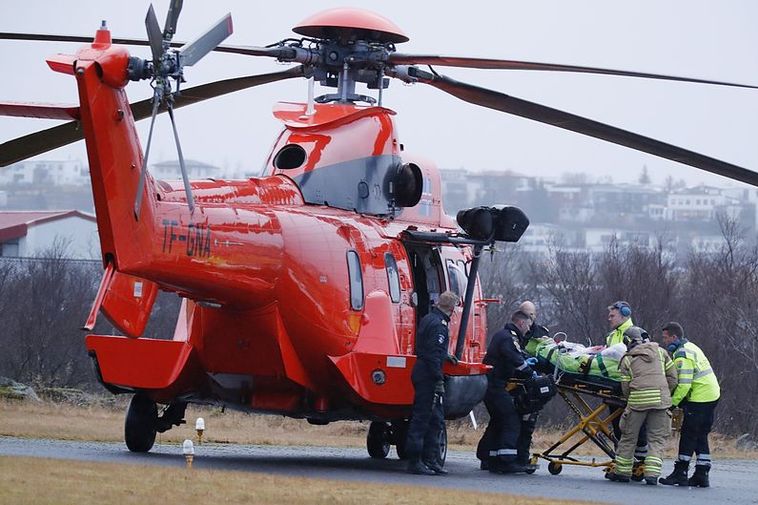 The survivors of the car accident being transported by helicopter from the scene of the accident. mbl.is/Árni Sæberg

Police in South Iceland hope to speak with the two men who were transported to Landspítalinn National University Hospital yesterday after their rental jeep plunged through a railing and off a bridge in South East Iceland. Two children also survived the crash and are seriously injured in hospital.

The cause of accident is yet unknown but the bridge may have been icy. The bridge across Núpsvötn is a single lane bridge.  Yesterday the design director of the Iceland Road Administration said speaking to mbl.is that neither the bridge or the railing comply to the latest standards.  Most accidents occurring on single lane bridges in Iceland have occurred at the Núpsvötn bridge, fourteen altogether and wo of them serious.

Head of Hvolsvöllur Police, Sveinn Kristján Rúnarsson says speaking to mbl.is that he doesn't know whether it's possible to speak with the two men who are recovering at hospital or not today but that they hope to get a clearer picture of the accident by speaking to them.

RÚV reported this morning that the men and the children have been moved from intensive care into other departments at the hospital.