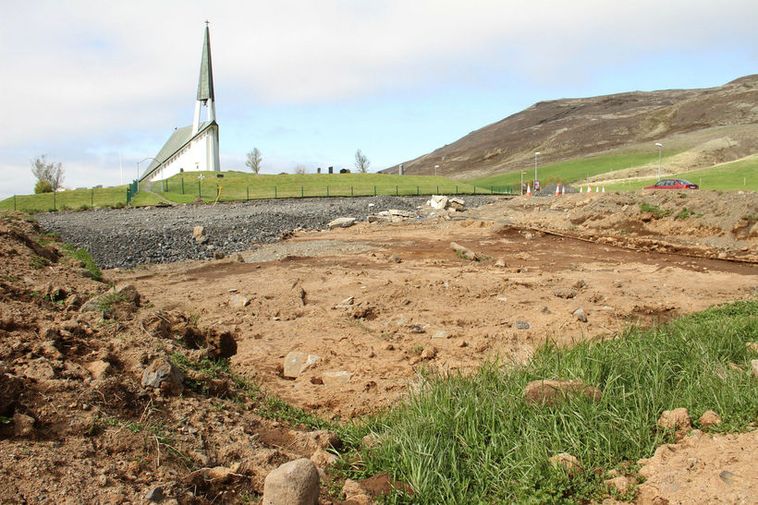 A team of Icelandic archaeologists has discovered occupation layers, dating back to the settlement of Iceland in the ninth century until the beginning of the 14th century, on Mosfell hill in Mosfellsdalur valley, just east of Reykjavík. The discovery is believed to be able to shed light on the history of the Middle Ages in the area.

Work on a new parking lot by Mosfellskirkja church was halted by the Cultural Heritage Agency of Iceland in April, and subsequent archaeological research revealed the layers. The agency decides this week whether excavations are to be continued. Only part of the site was damaged when work on the parking lot was in progress, according to archaeologist Ragnheiður Traustadóttir. The site seems to have been affected more in 1960, when a minister’s residence was built on the lot. Two areas are under investigation, one north of road leading up to the church, and the other east of the current parking lot.

“This is of vital importance,” Ragnheiður told Morgunblaðið, “and from the layers, you can read a lot of history, should the research continue. Not least because we have so little [in terms of archaeological finds] from the Middle Ages. This is very interesting.” Existing records indicate that a church was built in the area in the 12th century.

Ragnheiður finds it likely that a church from the Middle Ages, built on Mosfell hill, might be hidden north of the church that now stands on Mosfell. She believes houses and structures are yet to be found. “We didn’t dig much, but we discovered three items, among them a baking plate, imported from Norway. Those came here in the 11th century and were used into the 13th century. We also found a Norwegian sharpening tool and a piece of red jasper for making fire.”