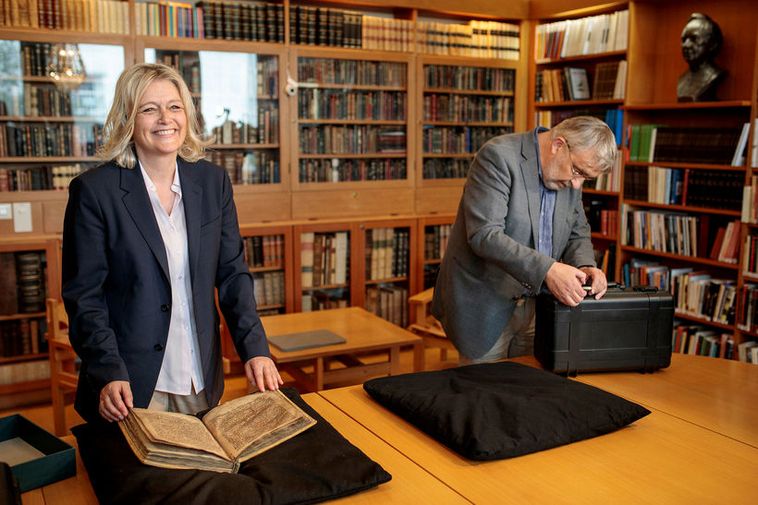 Received as royalty, two important manuscripts, dating back to the 14th century, arrived at Keflavík International Airport last night, on loan from Denmark. One of them is Ormsbók, one of the main manuscripts of the Prose Edda; the other one, is Njála’s Reykjabók, the oldest, almost whole, manuscript of Njáls Saga.

So royal was the reception that many tourists at the airport thought a foreign president had arrived, or a famous actor.

“We’re delighted. This is an important moment for us and for the public, and it’s remarkable to receive precisely these two manuscripts,” remarked Guðrún Nordal, director of The Árni Magnússon Institute for Icelandic Studies. This is the manuscripts’ first arrival in Iceland since they left the country in the 17th century.

The manuscripts were escorted by police through the terminal building and then by the special forces of the National Commissioner of the Icelandic Police to The Árni Magnússon Institute for Icelandic Studies, where they will be preserved until the July 18th opening of the exhibition The Flower of Life: Iceland’s 100 Years of Sovereignty, at the National Gallery of Iceland, held to celebrate that in 1918, Iceland became a sovereign country. At the gallery, the manuscripts will be on display through the middle of December, when they will be returned to Denmark.

“We weren’t sure we would receive them,” Guðrún continued, “because these are real treasures, and it’s not simple having them lent to you. We are, therefore, very pleased that we succeeded, because these are manuscripts that matter a lot to us, especially with regard to the exhibition and the centennial, because in our fight for sovereignty, there were many references to our culture and our language. These key factors define us as a nation and show that we’re a full-fledged civilized nation.”