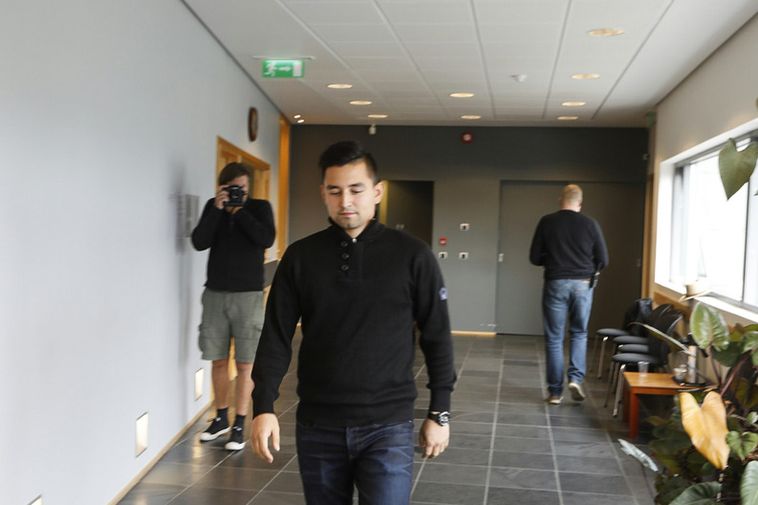 Nikolaj Wilhelm Herluf Olsen, fellow crew member of  Thomas­ar Møller Ol­sen who stands accused of murdering Birna Brjánsdóttir in January, testified to a completely different version of events to the one described by Olsen.

Nikolaj Olsen is the prime witness in the case as he was partying that fateful night along with the accused and was in the car where Birna was a passenger. He was released from custody on January 18th.

Judge Kristinn Halldórsson at Reykjanes district court asked Nikolaj Olsen to describe the events from the evening of January 13th.

"I was walking alone in the harbour and saw Inuk (another crew member who will be testifying later today), and Thomas, in a car together. I was going to take a cab into town and they asked me whether I needed a lift and I said yes."

After arriving in the Reykjavik City Centre, Nikolaj says that he wandered around a bit and then entered the English Pub where he had beer.  He spoke to Thomas online asking him whether he was coming over. After drinking "quietly" he says that Thomas turned up. They started drinking heavily together and once the place closed they went to the American Bar, he says..

"I arrived there a bit later because I was speaking on the phone. I wasn't allowed to go in at first but then Thomas fetched me. It's all a bit unclear. I don't remember much."

The judge asked why he couldn't remember. "I was really drunk."

Nikolaj remembers leaving the American Bar and entering the red Kia Rio car rented by Olsen. "I wanted to go back to the ship but Thomas wanted to go for a drive. I don't remember much."

When asked by the judge how well he remembered events he answered, "I remember almost nothing."

"But you have said that a girl entered the car on Laugavegur, can you tell me how that happened," asked the Kolbrún Benediktsdóttir, of the district attorney's office. "I remember that she came in through the rear and sat in the rear seat. But I don't remember much before going back to the ship."

"Can you describe this girl at all?"

"I don't remember anything in detail. When I left the car I saw that there was someone in the back." Asked whether he spoke to her at all he answered, no. He could not remember if the car stopped anywhere on the way from Reykjavik to Hafnarfjörður.

Nikolaj Olsen said that he felt as if somebody was in the rear seat when they arrived at Hafnarfjörður harbour. "But it's all very unclear. I had a feeling somebody was in the back seat. But  was so drunk. "  He does not remember speaking of this with Thomas Möller Olsen.

"Can you tell me whether that girl was Birna Brjánsdóttir?" asked Benediktsdóttir. "No," answered Nikolaj Olsen.

Asked whether he had driven the vehicle at any point, as testified by Thomas Möller Olsen, he replied that he didn't have a drivers licence and had never learned to drive a car.

He does not remember asking to be alone in the car with the girl. "No I do not remember that. I doubt that. I was so very drunk, I don't have a licence and no experience of driving."

Do you think that happened?

Did you do anything to the girl in the car?

So you don't recognize Thomas's version of events?

Next, he was asked about what happened the next day. "I woke up at around 11. I went to Thomas's cabin but didn't go inside. I remember asking him about the women."

Páll Rúnar Kristjánsson, defendant for Thomas Möller Olsen asked Nikolaj when he was told he was no longer a suspect in the case but a witness instead.

Have you been to Iceland regularly and have you gotten into fights here?

Next, he was shown security footage from a taxi showing a man entering a red Kia Rio at the Bæjarins bestu hot dog stand in the city centre at 5 am. Asked whether he is the man in the footage he replied that he couldn't see it clearly.

Were you inside the vehicle the whole time?

The defendant pointed out that the driver of the vehicle seems somewhat shorter than Thomas, who measures 190 cm. At this point the judge stopped the question.

He is asked by the defendant on why he had bruises on his left arm. "You were not using your left arm when you stepped out of the car and walked into the ship. Was your arm hurting?"

"No."  Nikolaj says that he fell asleep soon after going back to the ship after making a few phonecalls.

"You were in isolation custody for interrogation. Do yo feel police pressured you into saying something?"

"When I was first interrogated they screamed at me and told me to say things, but not after that. "

"Did anyone ask you about the bruises to your left arm?"

"I don't remember that, I don't even remember having any bruises."

He is reminded of information in police reports where it states that Nikolaj was arrested as it is believed that he knew what Olsen was planning to do in that trip into town. (Olsen is also accussed of drug smuggling).

"I don't remember much but I'm not hiding anything. I was far too drunk to remember."

"Were you trying to comply to the questions you were asked? Were these false memories? " (The defendant reads from a police report where it states that Nikolaj's defendant is worried that he is simply trying to answer what the police want to hear).

Next, the prosecutor asked him a few questions including with regards to a police report where Nikolaj tells police that he had asked Thomas Möller Olsen, "What he was going to do with those girls."  Thomas had replied that he was going to take care of them, and drive them.