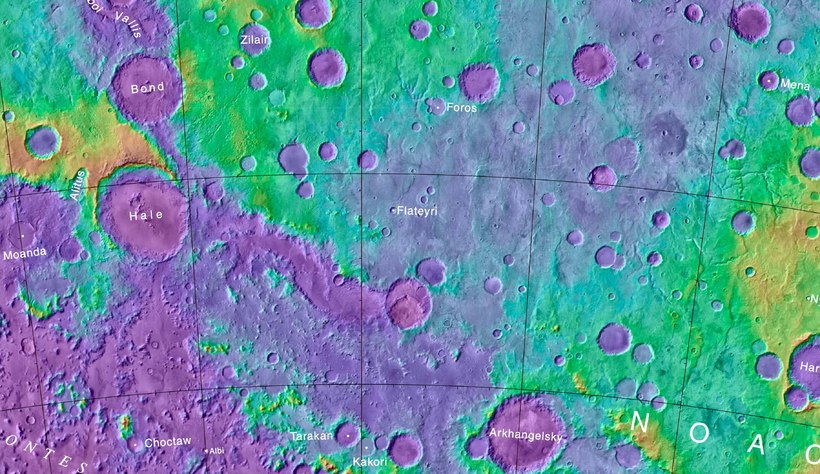 The crater Flateyri is on the south pole of Mars and is 9.5 kilometres wide and 1 km deep. From Stjörnufræðivefurinn

The International Astronomical Union Working Group for Planetary System Nomenclature has approved the name Flateyri for a crater on Mars.  Flateyri is a village in the West Fjords of Iceland.

Icelandic astronomy expert Sævar Helgi Bragason, who is edior of the Stjörnufræðivefurinn website and director of the Seltjarnarnes astronomical society explains that the person who suggested the name usually remains anonymous. He expects it's one of the many scientists researching Mars who have previously visited Iceland for geological research.

"They sometimes have great memories from their visit to Iceland and suggest Icelandic place names for craters on Mars or other places in the solar system."

Flateyri is the fourth place on the red planet named after an Icelandic village, the previous ones being Grindavík, Vík and Reykholt.

Bragason explains that naming something after Reykjavik however would not be allowed as the city has more than 100.000 inhabitants.

The crater Flateyri is on the south pole of Mars and is 9.5 kilometres wide and 1 km deep.

"It's probably pretty old because it's part of the oldest area of Mars, just above the Argyre basin," says Bragason.

Flateyri in the remote West Fjords is a small fishing village. In October 1995 an avalanche hit the village killing 20 people. Many people left the village in the wake of the economic crash in 2008 but now it's becoming a popular residence for artists, filmmakers and musicians.

Total eclipse of the moon tonight in Iceland