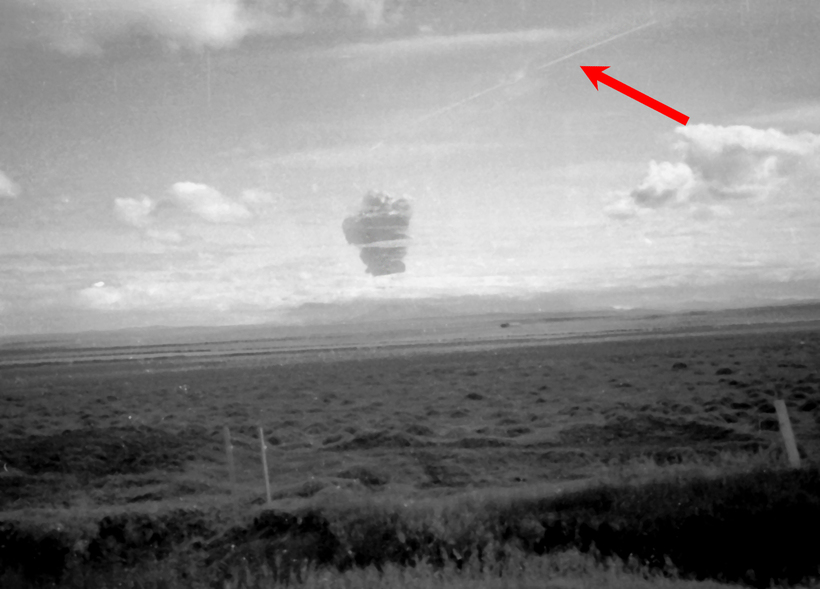 Just a few seconds apparently separated a passenger jet from encountering the plume of particles and gas shooting up from the famous Icelandic volcano Hekla, when it erupted in 1980.

This photograph taken by Einar Pálsson clearly shows the moment Hekla erupted on 17 August 1980 and how the volcanic plume generated met the contrails of an aircraft which had recently flown over.

Pálsson’s father, Páll Einarsson, is a Professor of Geophysics at the University of Iceland and has sent written warnings to the Icelandic Transport Authority on the “needless risk” taken by transatlantic jets flying directly over Hekla.

Pilot Skúli Brynjólfur Steinþórsson estimates that the jet, the contrails of which are still visible in Pálsson’s photo (indicated with a red arrow), passed over Hekla at an altitude of 30,000 feet just 20-25 seconds before the plume reached that height.

As things stand, should a Hekla eruption alert be received from the Icelandic Met Office, the current response plan provides for clearing a 60 nautical mile radius no-fly zone around Hekla within 10-15 minutes.

The Icelandic Transport Authority has commissioned a risk assessment regarding this issue, the findings of which are expected after the summer holidays.