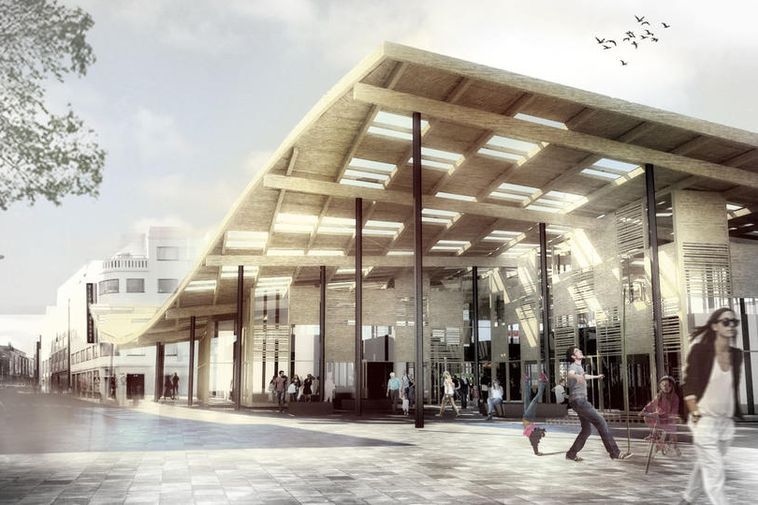 The City of Reykjavik is taking over Hlemmur square from bus company Strætó. The rather run-down central bus hub at the top of Laugavegur main shopping street could be receiving a well-deserved facelift and possibly, a new role as a food market.

Mayor Dagur B.Eggertsson voiced new ideas for Hlemmur on his weekly blog last week pointing out that the area had undergone a lot of changes in recent years. "I'm very taken by the idea of establishing a food market at Hlemmur, for example a farmers market on weekends."

In 2012 the City of Reykjavik called for submissions for ideas for the future of the Hlemmur bus central with a couple of architectural firms coming up with ideas. The next steps, according to Eggertsson is to advertise for ideas and operators for the square.

The area around Hlemmur has undergone considerable gentrification in recent years. Formerly a rather seedy area with a reputation for drug peddling, it is now benefitting from the upbuild of the nearby financial quarter of Borgartún, with its offices, hotels and restaurants, and a division of the Iceland Academy of Arts which means that it bustles with students and young families.

A new hotel has also risen by the square, a hotel aptly named Hlemmur Square and trendy restaurants and bars seem to be making a rapid appearance in the area, including for example the hip Kex Hostel, Korean restaurant K-bar. Restaurants that have popped up in the Borgartún district include health food restaurants Local, Lifandi Markaður and Happ, the family-orientated Hamborgarafabrikkan and the Sushi Train.

One of the more interesting ideas to have appeared are by architect Snædís Bjarnadóttir whose MA project featured a Scandinavian style building for Hlemmur to house shops and a food market. "My idea was to give the square a new role by making it more attractive. In this way it would strengthen the upper part of Laugavegur and draw people to it," she explains, adding that the square would connect Laugavegur with Lækjartorg square in the city centre.  As for the idea of a food market she writes that the eating habits of Icelanders are rapidly changing from fast food culture to quality, organic products. "We could create a place where the fishmonger, the butcher, a bakery and a fruit and vegetable stall could make access to these products easier."

Bjarnadóttir has not presented these ideas to the City of Reykjavik so whether anything like this will rise on Hlemmur square remains to be seen, but her ideas certainly give a fascinating insight into how much the square could change in the near future.