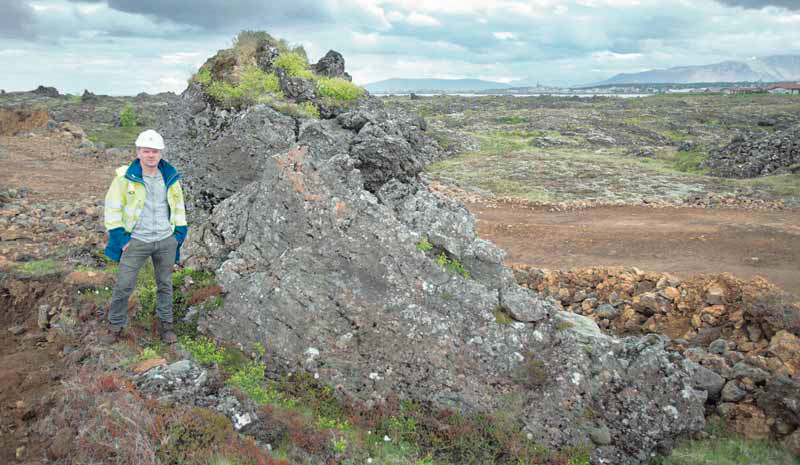 The rock is possibly Ófeigskirkja, a rock mentioned in Icelandic folklore and a supposed church of the elves. mbl.is/RAX

A large and unusual rock will be moved today to make way for a new road in the municipality of Álftanes, close to Reykjavík. An announcement from the Icelandic Road Administration states that the rock will be placed by the side of the road close to similar rock formations.

"A pact between elves and men," explains clairvoyant Ragnhildur Jónsdóttir who wrote to the Mayor of Garðabær on behalf of the elves in 2012.

Moving the rock has been somewhat controversial and the new placement of the rock is no coincidence.  In 2013 the story of this rock, believed to be the legendary Ófeigskirkja- an elf church- made international news.

"Elf advocates have joined forces with environmentalists to urge the Icelandic Road and Coastal Commission and local authorities to abandon a highway project building a direct route from the Alftanes peninsula, where the president has a home, to the Reykjavik suburb of Gardabær. They fear disturbing elf habitat and claim the area is particularly important because it contains an elf church," wrote the Associated Press at the time.

The project  was  halted until the Supreme Court of Iceland ruled on a case brought by a group known as Friends of Lava, who cite both the environmental and the cultural impact — including the impact on elves — of the road project.

Elf issues have affected planning decisions in Iceland before, and the road and coastal administration has come up with a stock media response for elf inquiries, which states in part that "issues have been settled by delaying the construction project so that the elves can, at a certain point, move on."

The High Chieftain steps in

The fight for the protection of the Gálgahraun lava and this rock began in 2007 and Friends of the Lava wanted the area to be registered as protected. 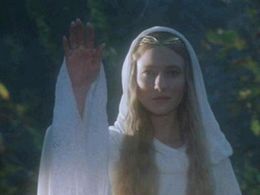 Galadriel, the Lady of Lórien as she appears in Peter Jackson's film version of Tolkien's Lord of the RIngs. Tolkien was very inspired by Icelandic literature. Photo/ Wikipedia

They protested in a number of ways and in April 2009, high chieftain of the Ásatrú society, Hilmar Örn Hilmarsson conducted a ritual of sanctification at the rock. "Tales and legends have spoken of this unusual rock, formed in the shape of a church, which stood in the middle of a well-travelled path for centuries and served to guide people on their way," explains Hilmarsson.

The event gained considerable  attention in Iceland and even former president of Iceland, Vigdís Finnbogadóttir, sent support greetings on the day of the ceremony. "It's ironic, I suppose, that a rock which is supposedly a church for the elves was sanctified by a heathen," says Hilmarsson who declines being any sort of expert on Icelandic elves. "But belief in elves was certainly unusually strong in Iceland for centuries, compared with other countries. 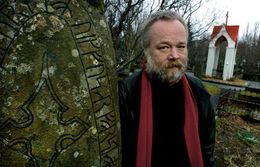 High Chieftain of the Ásatrú society, Hilmar Örn Hilmarsson conducted a sanctification ritual at the rock in 2009. Photo: Morgunblaðið/Golli

The elven world certainly existed in the norse myths and some people suggest that when Christianity became the official religion of Iceland, the pagan gods were somehow transferred into the rocks and hills. " He adds that the elves in Iceland are particularly "nice" compared to for example, the elves of Ireland or of Germany who are mischievous and often rather evil. "The Icelandic elves  live in harmony with humans, have churches and hold mass."

Contacted by the elves

The Friends of the Lava have not succeeded in thwarting plans of constructing a road through this path but the alleged Ófeigskirkja rock was spared and is being moved to its new location today.

"In 2012 the elves summoned me into the lava and showed me an elven church surrounded by beautiful, bright energy, and next to that church was Ófeigskirkja, a chapel," explains seer Ragnhildur Jónsdóttir who runs the Elf Garden in Hafnarfjörður. "The elves told me that Ófeigskirkja had been used as a beacon guiding people through the lava, and the rock was right there, in the pathway of the new road to be constructed. I wrote to the Mayor of Garðabær on behalf of the elves. Ófeigskirkja will now be moved to a place near other elven abodes in harmony with the wishes of the elves,"explains Jónsdóttir, and indeed an announcement from the Icelandic Road Administration today supports this claim.

A future home for the rock

"The rock will be moved next to other beautiful and simlar rock formations thus creating a unified whole," it states in the press announcement. "Hopefully these rocks will become a popular stop for hikers in the area. Many believe that the rock is the abode of elves, a chapel, or a church, and that the rocks to which this "chapel" will be moved are also the home of elves. It is possible that the rock is Ófeigskirkja although people do not agree on the matter. The rock is in two parts, one weighing 50 tonnes and the other weighing 20 tonnes and will be hoisted up and transported today at eleven a.m in these two parts."

Jónsdóttir, who seems rushed in the telephone conversation explains cheerfully that she has to hurry so as not to miss the event. " I'm going to see the rock moved and make sure that everything is allright. The elves have been preparing for this for a long time, moving their energy to the new location. Hopefully all will go well."