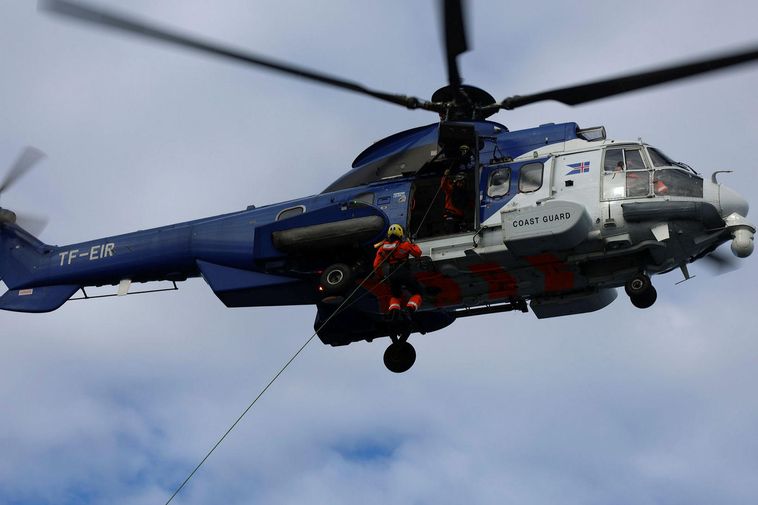 The Coast Guard helicopter was called out to search for the missing people. Morgunblaðið/Sigurður Bogi

"The weather had been crazy over the weekend. It was a bit better yesterday, but still bitingly cold," says Sigurður Árni Vilhjálmsson the chairman of Dagrenning Rescue Team in Hólmavík. The police in the Westfjords received a call for help yesterday afternoon because of young people who were travelling to the Westfjords but had not been heard from for two days.

The car was found on Kolla­fjarðar­heiði

When a car was seen in Kollafjarðarheiði around 9 PM last night, it turned out to be the people they were searching for. The car was stuck and the people were really cold and not in a good shape after waiting in the car for over 50 hours. A window in the car was broken so it was freezing inside the car, which was getting to them although they had on warm clothes. However, they had little or no food.

The young people were taken directly to Hólmavík where they saw a doctor and they got something to eat because they were literally starving. The car was left where it was found on Kollafjarðarheiði.

"We always find the cars"

There is not a good reception for cellphones in this area. The road is basically a summer road and not meant to be used in winter. On the way to the Westfjords the people had used Google maps, which always picks the shortest route, which turned out to be a big mistakein this case.

"This trip will probably be remembered for along time, because the people waited for rescue in the car for 50 hours," says Vilhjálmsson. "However, it was absolutely the right thing for them to do to wait in the car and not try to walk to the nearest village. "It is very difficult finding people walking who can get lost, but we always find the cars."