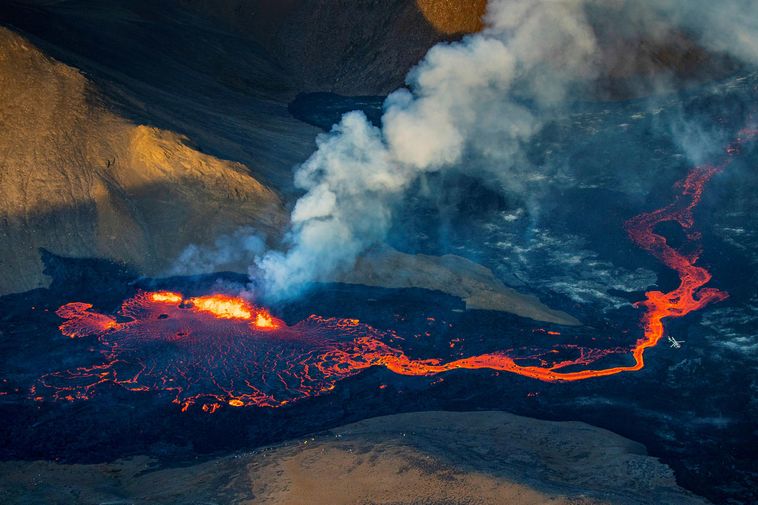 Lava is moving at the eruption site in Meradalir. mbl.is/Árni Sæberg

Ein­ar Bessi Gests­son a natural disaster expert at the Met Office told mbl.is this morning that there have not been a lot of changes in the eruption at Meradalir since last night, by the looks of webcam footage.

"The visibility last night has been coming and going. The cameras are showing that the lava is running into the Meradalur," he adds.

He says that when the weather allows, there will be tests made at the site, both on the ground and from a plane. When exactly that will happen today is not certain yet.

Yesterday afternoon scientists were going over the situation and whether access to the eruption site will be opened today, according to Bogi Adolfsson, the chief of the Rescue Team Þorbjörn in Grindavík.  The weather is supposed to go down in the afternoon. Today, however, it was decided to maintain the ban on entering the eruption site because of the weather. It will be opened tomorrow, Tuesday, at 10 AM.

It looks like Icelanders were more aware of the eruption site being closed yesterday, because the rescue teams had to stop a few tourists who wanted to see the sight.

"They were disappointed obviously," says Adolfsson about the tourists who wanted to enter yesterday. "They have limited time unlike us who live here."