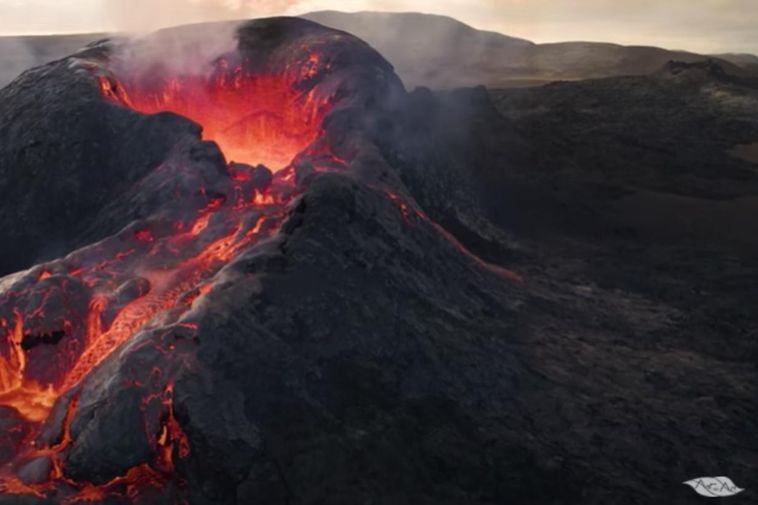 March 19 a year ago, a volcanic eruption in Fagradalsfjall, Southwest Iceland, began. Quite appropriately, this Saturday, March 19,  is when the world theatrical premier of the documentary feature film Fire & Iceland will take place at Bíó Paradís, Reykjavík. The documentary, made by the Art As Air Project, was filmed over the course of the eruption, which ended September 18. The documentary was produced and directed by April Anderson.

According to press release, the film makers interview people from several different walks of life in Iceland. Members of rescue teams talk about dealing with the daily broken bones and heart attacks that were always a possibility with tourists who underestimated their capabilities on the difficult trail to the volcano.

A helicopter pilot, who flew back and forth to the site several times every day with tourists who were seeing a volcanic eruption for the first time in their lives, describes her experience.

Then there are artists who detail how the eruption inspires them. Songwriter, performer and actress Guðrún Ýr Eyfjörð (a.k.a. GDRN), known for her role in the Netflix series Katla, discusses how the land inspires her songwriting, and visual artist Guðmundur Óli Pálmason reveals his “volcanoroids” and abandoned Icelandic structures, captured on expired peel-apart film.

Award-winning photographer and “Volcano Guy,” Ragnar Th. Sigurðsson details his decades-long history of photographing volcanic eruptions, and Icelandic Lava Show co-creator Júlíus Ingi Jónsson demonstrates how he makes his own lava to educate people about the composition and causes of different types of eruptions.

Admission is free to the event, but seating is limited, so guests are asked to R.S.V.P. at fireandiceland.info@gmail.com. Special guest speakers address the audience at 7 pm and the documentary screening starts at 7:15 pm.

The documentary is already available on Amazon Prime in the UK and the US.

You can watch the trailer below: