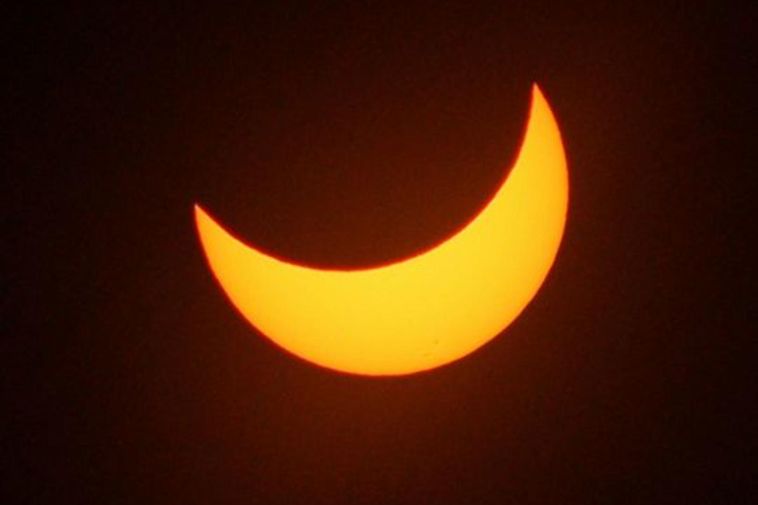 The extent of the eclipse will be close to what you see in this photo. Photo: Icelandic Met Office/Þórður Arason
Vala Hafstað
vala@mbl.is

A partial solar eclipse will be visible in Iceland tomorrow morning, Thursday, mbl.is reports. In other words, the moon will come between the sun and the earth, without completely obscuring the sun.

At its peak, the moon will obscure 69 percent of the diameter of the sun, creating a 61 percent eclipse.

The amount of the eclipse in Iceland will vary, depending on the region – anywhere from 56 to 65 percent, and the timing can vary by a few minutes.

This will be the largest solar eclipse in Iceland since March 20, 2015, when there was a 98 percent eclipse in Reykjavík and more than 99 percent in the East Fjords.

“Unfortunately, the weather outlook is not so good for [tomorrow], with rain likely in many parts of the country,” states Þórður Arason, specialist at the Icelandic Met Office. “Still, we can’t rule out the possibility of a clearing sky somewhere for a little while.”

Þórður stresses the importance of wearing special solar eclipse glasses to protect your eyes from damage when observing the solar eclipse.

If you miss the chance to see the eclipse, don’t despair, for five years from now, on August 12, 2026, at 5:45 pm, a total solar eclipse will be visible in Iceland.