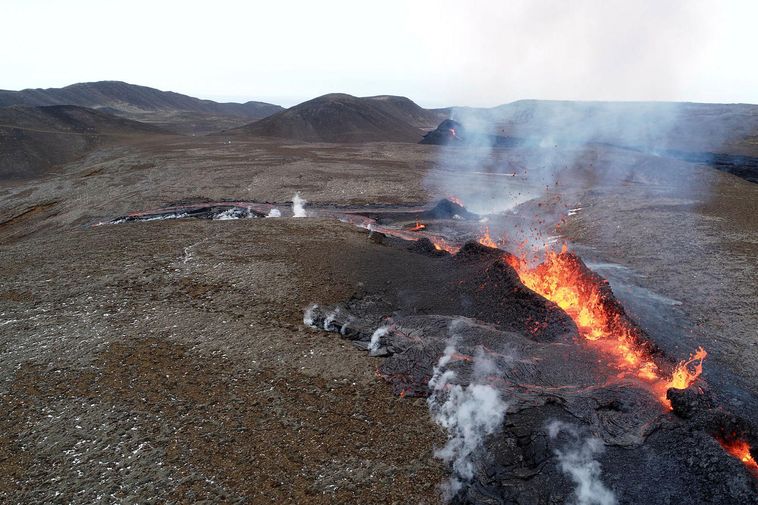 A new fissure or vents have opened at the eruption site in Fagradalsfjall, Southwest Iceland, this morning, Elísabet Pálmadóttir, natural hazard specialist at the Icelandic Met Office, tells mbl.is.

She notes that the they can be seen from mbl.is’s webcam, located at a safe distance from the eruption:

A meeting of the Department of Civil Protection and Emergency Management and first responders is in session to discuss this. According to Elísabet, the new vents or fissure are in the same area as the previous four and, therefore, the eruption is developing as previously expected. She expects a similar development to continue.

“[A]nd it is noteworthy that there is no obvious change in the activity at the other vents,” a post on the Facebook page of the University of Iceland volcanology and natural hazard group reads. “[S]o, like the others, these seem to be pure additions to the eruption flux.”

In a response to a question on the Facebook page regarding whether these are four new vents or one continuous fissure, the group states: “At a depth of a few hundred meters, this is no doubt a continuous fissure/dyke, but on the surface, it is a swarm of short, en echelon fissures, as they appear on maps from the fissure monitoring team.

Therefore, it is likely that each vent is an independent channel with roots in a continuous part of the dyke.”

Þóra Björg Andrésdóttir, geologist, who is at the eruption site, just told mbl.is that instead of describing this as four new vents, you could just as well speak of a 100-meter-long fissure erupting.

“There is a continuous eruption in a 50-meter area. Then there are two additional craters, hard to tell apart, and yet another one to the side.” The lava flow from them all is toward the south.