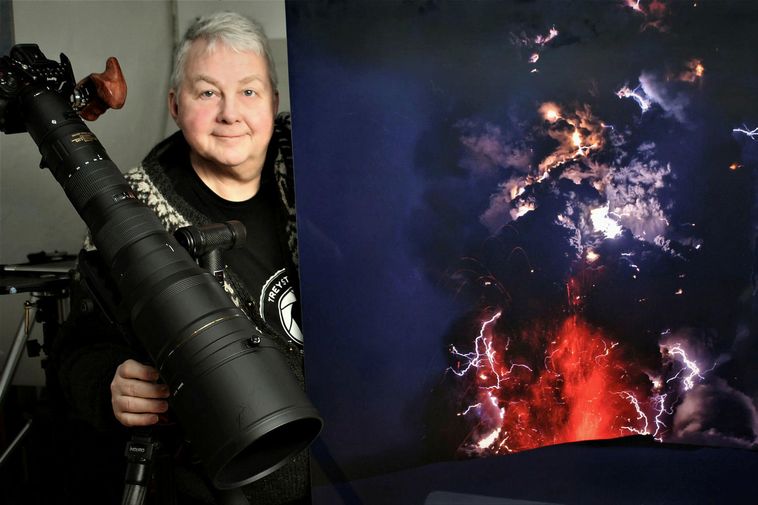 Ragnar Th. Sigurðsson is ready with the camera. He stands beside a photo he took of the 2010 eruption in Eyjafjallajökull. Photo/Sigurður Bogi Sævarsson
Vala Hafstað
vala@mbl.is

“Volcanic eruptions always fascinate and the excitement increases,” photographer Ragnar Th. Sigurðsson states in an interview with Morgunblaðið reporter Sigurður Bogi Sævarsson. He has been taking photos for nearly half a century, specializing in Icelandic landscape and natural forces.

Naturally, he is closely following developments on the Reykjanes peninsula, wondering whether an eruption is to be expected soon.

Ragnar’s first job as a photographer was at the daily Dagblaðið in 1975. Shortly before Christmas that year, a volcanic eruption began in the Krafla area, Northeast Iceland, and by 1984, the area had seen nine eruptions.

“Back then, photographers and reporters were allowed to go all the way up to the glowing lava, a thousand degrees hot,” he relates, “and this taught you to beware of danger. The main rule is to beware of pollution from gases and to avoid depressions and hollows. You need to have an instrument to measure volcanic gases and gas masks, wear a helmet and be dressed right. You have to read your surroundings and always have an escape route if something unexpected happens.”

“There were a few eruptions in Grímsvötn, and the Gjálp eruption in the fall of 1996 was a major eruption. The Holuhraun eruption, which began in August of 2014 and lasted into 2015, is very memorable, as well as pictures taken there,” he notes.

“I guess the ones that stand out, though, are the eruptions in Eyjafjallajökull – first on Fimmvörðuháls and then the phreatomagmatic eruption [where magma reacts with water] in the glacier itself. I spent days in the area, photographing lava flow, the eruptive column, and lightning in the sky. [Geologist] Ari Trausti Guðmundsson and I got the idea to publish a book about the eruption, which we did. It came out 18 days after we got the idea, and the eruption was still ongoing.”

Ragnar Th. has been working independently for a long time. He operates an image bank at Arctic-Images.com, where photos from Iceland can be accessed and purchased, including countless ones of volcanic eruptions.

Fast technological advances have changed Ragnar’s job. “Still,” he states, “the photographer needs to be alert, have limitless interest in the surroundings, and be good at finding new and exciting perspectives, seize the right moment and take the one and only true picture that captures the whole eruption.”

Regardless of how good the camera is, ”it is the photographer and his skill that determine the outcome,” Ragnar concludes.