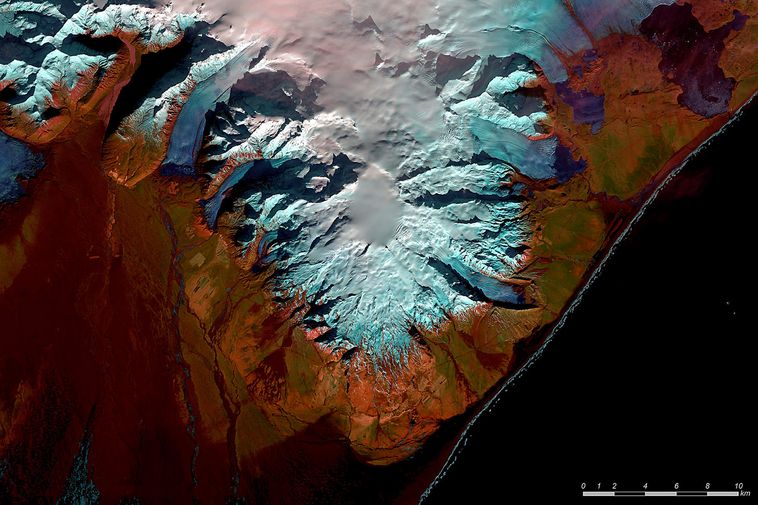 This colorful satellite picture of Öræfajökull volcano, Southeast Iceland, was taken on Monday, Morgunblaðið reports. The oval shape of the crater is clearly visible under the ice. It measures 3x4 km in diameter. The volcano is covered in ice and measures 20 km in diameter. The mountain’s highest peak is also Iceland’s highest, Hvannadalshnúkur, at 2,110 m (6,923 ft). It is located on the south side of Vatnajökull glacier.

According to icelandicvolcanoes.is, Öræfajökull is a stratovolcano, and its eruptions have been accompanied by glacial outburst floods, also called jökulhlaups. Its eruptions are not frequent – only two of them have occurred during the past 1,100 years - in 1362 and in 1727.

The eruption of 1362 is the largest one known to have occurred there in Holocene time. It was highly explosive and produced 10km3 of silicic tephra .

It caused total devastation within a 20-km radius of the volcano, due to large jökulhlaups, heavy tephra fall, as well as pyroclastic density currents. Volcanic ash was intense and tephra was deposited as far away as Greenland, Norway and Ireland. The 1727 eruption was not nearly as large or destructive.

The interval between eruptions is estimated to be between 500 and 600 years.

We hope the volcano will stay asleep for a long time to come.