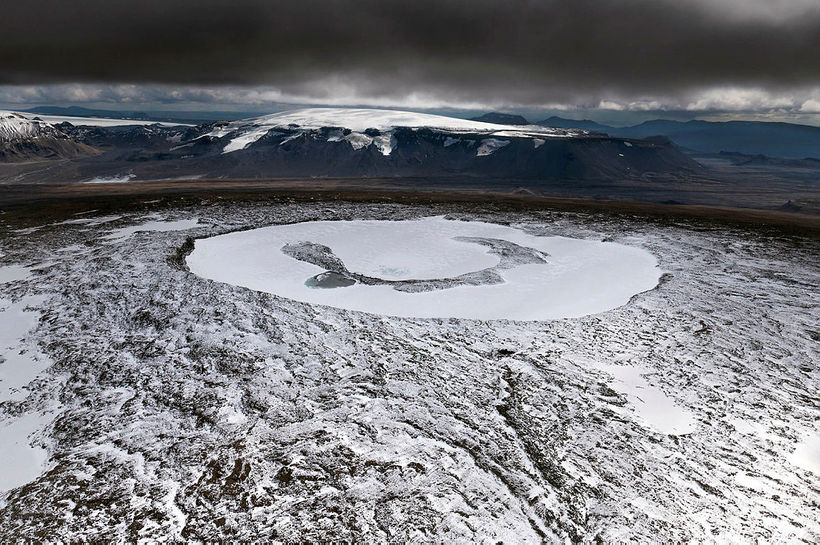 Ok, the glacier that once was. mbl.is/RAX

The newsletter Melting Glaciers, which has just been published online, reveals that glaciers in Iceland have been rapidly retreating for 25 years, and that glacier downwasting is among the most obvious consequences of global warming.

The newsletter describes an alarming trend: “Since 2000, the area of Iceland’s glaciers has decreased by ca. 800 km2, and by almost 2200 km2 since the end of the 19th century when the glaciers reached their maximum extent since the country’s settlement in the 9th century CE,” the newsletter states. “The glacier area has on average shrunk by ca. 40 km2 annually in recent years. Glaciers typically retreated by tens of metres in 2019.” 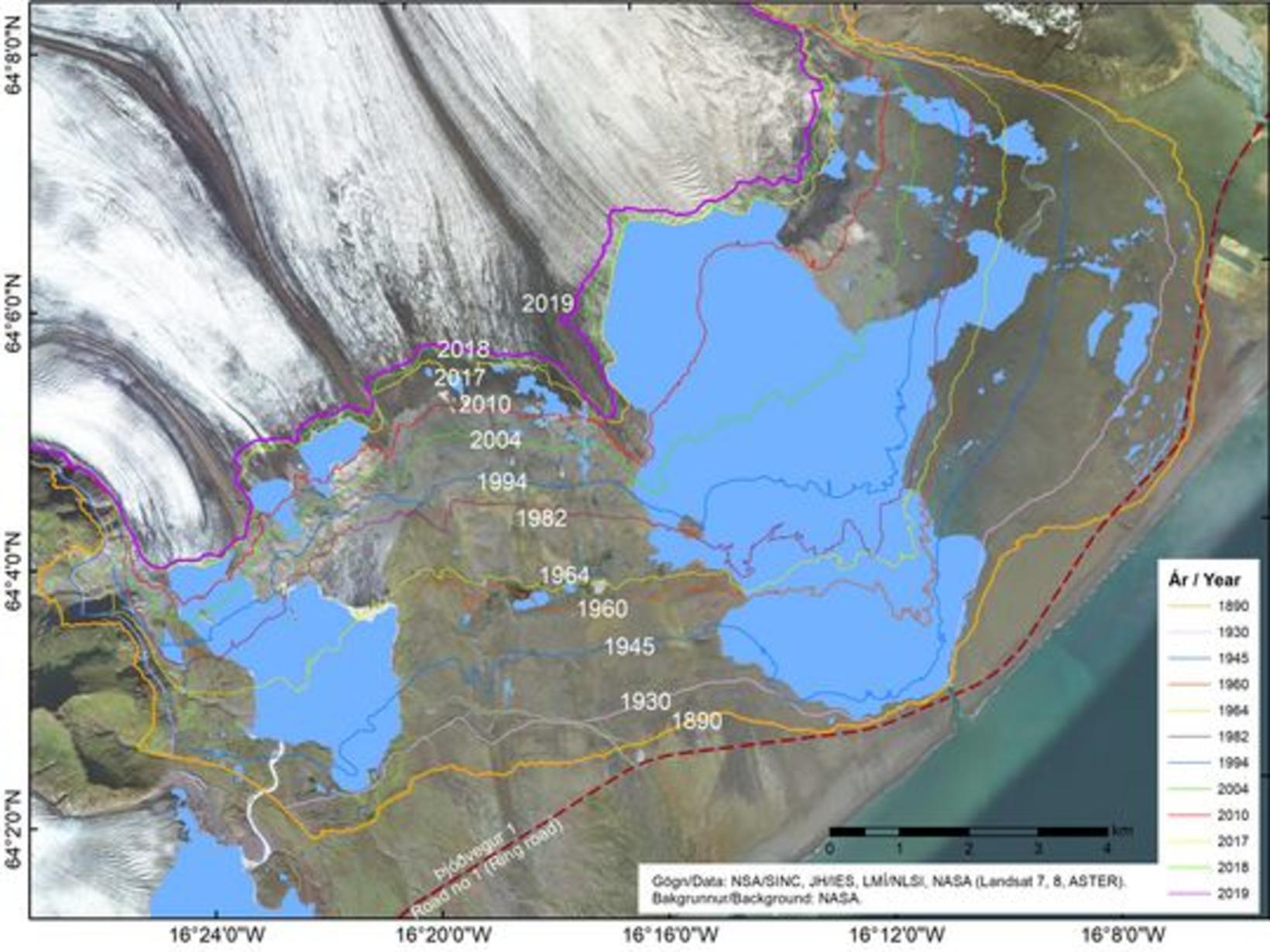 The popular tourist destination Jökulsárlón glacial lagoon is an example of how important calving into the ocean or terminal lakes can be for the mass balance of glaciers. Jökulsárlón lagoon started to form in the mid-1930s because of the retreat of the glacier, the newsletter states. The lagoons by the terminus of Breiðamerkurjökull, Jökulsárlón and Breiðárlón, as well as some smaller lagoons, now have a combined area of over 30 km2.

“On average, the lagoons have grown by 0.5–1 km2 annually in recent years. The Breiðamerkurjökull glacier retreats and thins due to negative surface mass balance in a warming climate but also due to calving (ice breaks of[f] the front into lakes or sea) into Jökulsárlón lagoon. Calving currently causes about 1/3 of the mass loss of Breiðamerkurjökull. The large ice sheets of Antarctica and Greenland lose large amounts of ice by calving, and the rate of loss has intensified greatly in recent years.” 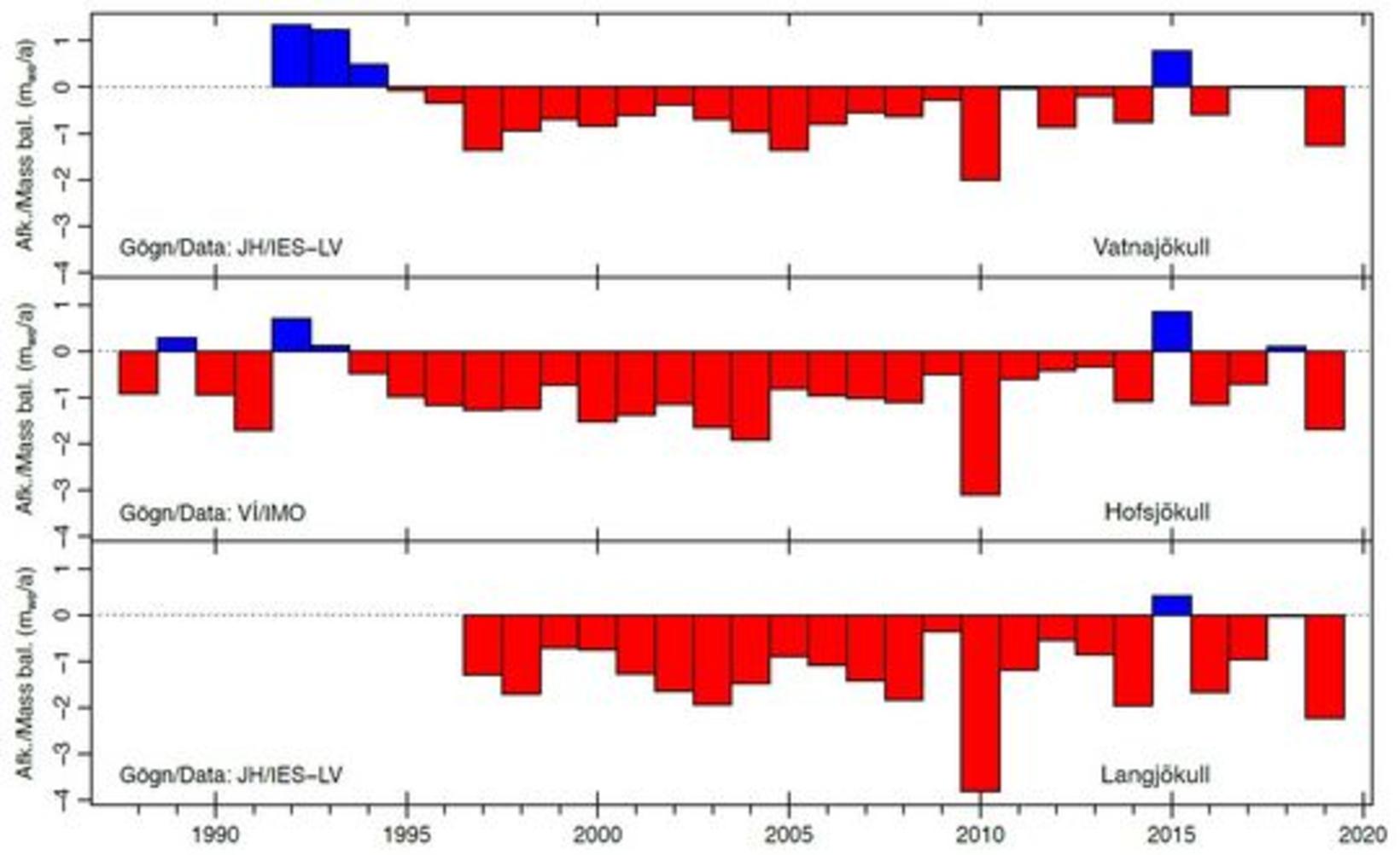 Annual and accumulated mass balance of Vatnajökull, Hofsjökull and Langjökull ice caps since the start of regular mass-balance measurements on each glacier. These three ice caps contain >95% of the volume of ice in the glaciers of Iceland. Graph/The Icelandic Met Office

According to the newsletter, Iceland’s three largest glaciers have lost about 250 km3 of ice since 1995, corresponding to about 7 percent of their total volume.

The newsletter is a collaborative effort between the Icelandic Met Office, the Institute of Earth Sciences at the University of Iceland, the Iceland Glaciological Society, the Southeast Iceland Nature Centre, and Vatnajökull National Park, published with support from the Icelandic Ministry for the Environment and Natural Resources through the project “Melting glaciers.

For more information, you can see the entire newsletter, including informative graphs and photos, here .