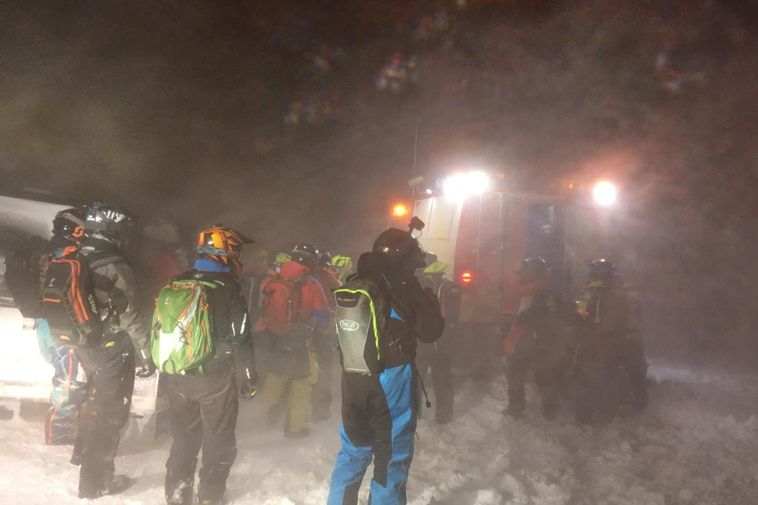 About 300 rescue workers in 57 vehicles were called out shortly before 8 pm last night to rescue a group of 39 people at the base of Langjökull glacier, who had run into trouble on an organized snowmobile trip, due to inclement weather, mbl.is reports.

A yellow weather alert was in effect in every part of Iceland, and the Met Office had warned against any travel in the highlands.

Blizzard conditions, next to no visibility, and tough driving conditions made the rescue work very difficult. The group had sought shelter in two vehicles and waited there for a long time. They were wet, cold and shaken when rescue teams found them half an hour after midnight.

By 2 am, all the people had been transported from the highlands in snowmobiles.

They were then transferred to other vehicles and transported to a Red Cross shelter at Gullfosskaffi by Gullfoss—a trip that took several hours.

The group includes tourists of all ages, some of them children. The people were examined by healthcare workers and given crisis counseling. They had been out in the storm since 1 pm yesterday. The first tourists to arrive in the shelter came there around 6 am, and the last ones were reported to have arrived around 8 am. None of them is seriously injured, according to mbl.is.

When asked whether the tour company shouldn’t have known that weather didn’t permit traveling in the area, Chief Constable Rögnvaldur Ólafsson, who works for the Department of Civil Protection and Emergency Management, responds, “I expect the South Iceland police to investigate this matter. As far as I know, there was a yellow weather alert in the whole country yesterday, which gives reason to reassess [whether to take such trips], I believe.”

The snowmobile tour company that organized the trip is Mountaineers of Iceland, according to mbl.is. That same company was in the news in January of 2017, when an Australian couple got lost during a snowmobile trip and had to wait hours before being rescued. The couple subsequently sued the company.