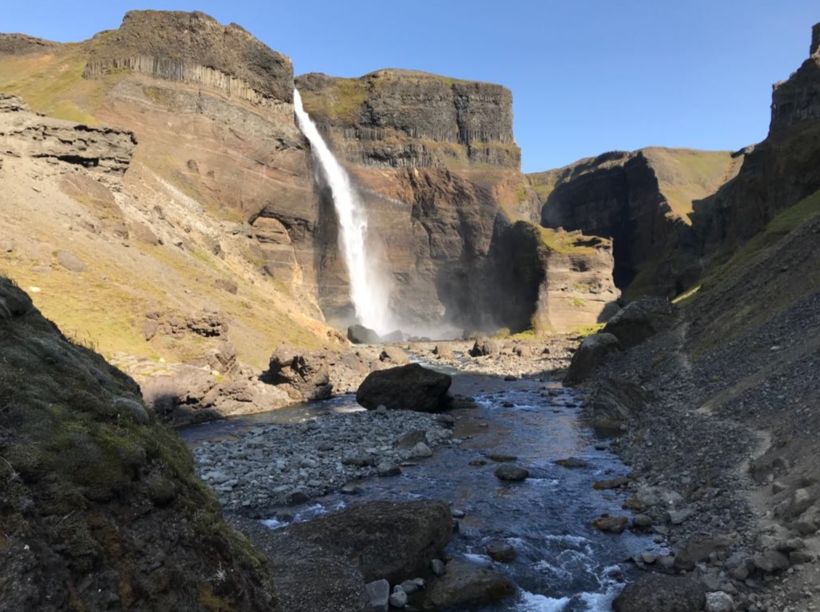 Life is full of surprises, unexpected connections and new ways of looking at things. That’s what discovered on a recent daytrip to the south of Iceland. I joined a travel blogger on a private guided tour called the Secret Circle , offered by the travel company Glacial Experience.

Our guide, Kjartan Valgarðsson, who happens to be the company owner, picked me up in a black Landcruiser early in the morning. We had never met, but within minutes, we had discovered three common acquaintances, all of whom happened to be my cousins.

We, Icelanders, are constantly searching for some invisible ties that connect us. Deep inside, we have a secret desire to discover new relatives - to expand our extended family. It’s no coincidence, therefore, that one of the warmest ways to address a person in the Icelandic language is by calling them “frændi minn” or “frænka mín,” depending on whether it’s a man or a woman, which simply translates as ‘my relative’ in English.

Enough digression. No sooner had we established this triple connection than we drove up to the blogger’s home. Regína Hrönn Ragnarsdóttir greeted us with a warm smile, thereby convincing me she’d be a great travel companion.

We were headed eastward, over Hellisheiði mountain. It was a sunny, cool and very windy day, and as we reached the top of the mountain, we knew we were in luck. The weather gods had lifted the curtain off the most beautiful stage: Before us, to the left, were the volcanoes Hekla and Eyjafjallajökull in all their glory in the far distance, and to the right, there was the ocean, with Vestmannaeyjar islands lined up like diamonds, side by side.

Some distance from them, to the right, we even saw Surtsey, the island which emerged from the ocean in a volcanic eruption in 1963 and can only be visited by a select few researchers. 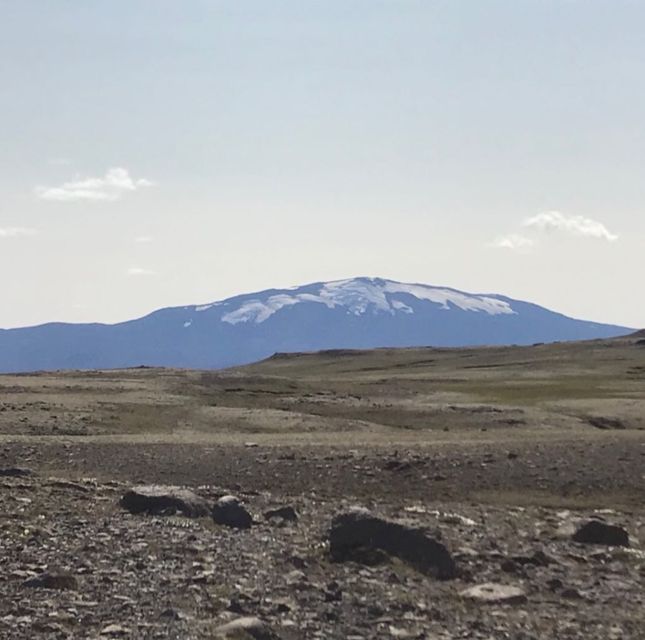 Our first stop was a gas station in Árnes. We sat down to have a cup of coffee and began chatting with a local tour guide to whom I was listening attentively when I thought I heard someone call my name.

“Vala? Is that really you?” I turned around and let out a cry of joy. Standing before me was my childhood friend, who lives in Germany and whom I hadn’t seen in ages. As soon as I had given her a warm hug, she looked at the guide in surprise and said, “Kjartan, great to see you again!” “You know him, too?” I asked, astonished. As it turned out, Kjartan and my friend’s German husband used to share an apartment when they were students in Iceland.

Elated, I turned around to greet the rest of the family. “How incredibly young her husband looks,” I said to myself, and was ready to call out his name when I came close enough to realize that the man I was about to hug was their son, the spitting image of his father - only a few decades younger. Standing beside the son was his sister and several feet behind them their father with graying hair, as was to be expected.

The old friends were glad to see each other after several decades of separation and took a while to catch up. Before we all left, pictures were taken of them together, smiling from ear to ear.

We left our circle of friends to continue the Secret Circle.

Our next stop would be the waterfall Hjálparfoss in Fossá river in Þjórsárdalur valley. It derives its name, “the waterfall of help,” from the fact that travelers, after a long ride across the highlands via Sprengisandur, were relieved to arrive here, being able to give the horses fresh, instead of glacial, water and allow them to graze. 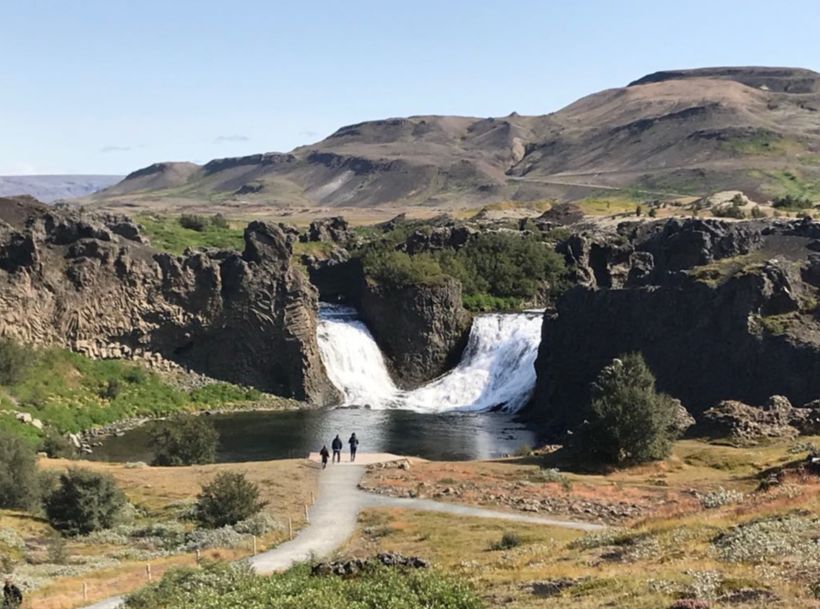 The waterfall, divided in two by a black rock in the center, appeared almost unnaturally white, in contrast to the surrounding black lava rocks. To me, it looked like the veils of two brides, standing back to back. It was easy to imagine all sorts of heads and faces in the surrounding lava formations, perhaps those of the wedding guests. The foreground was dressed in green, adding a most beautiful contrast to the snow-white waterfall. 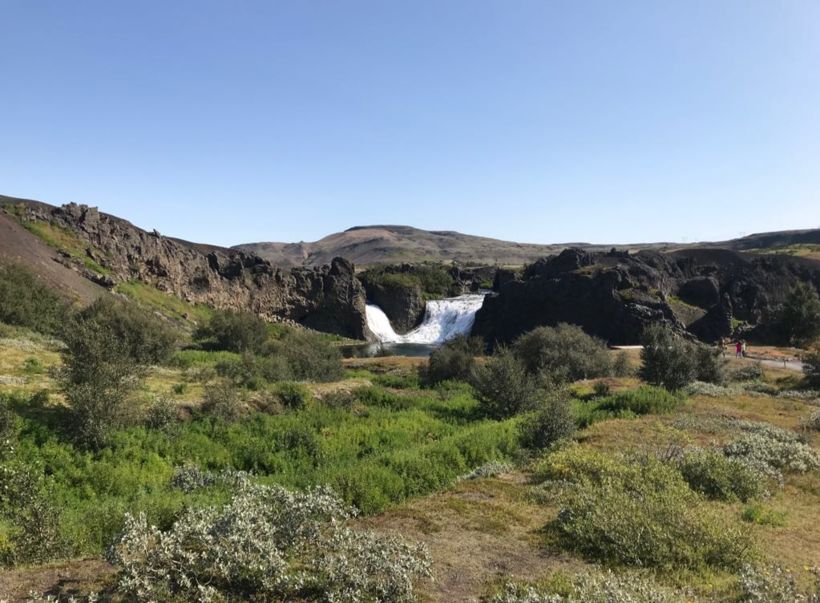 On we went, along roads made for well-equipped 4x4s only. The longer we traveled, the more surprised I was to discover that traveling with us was not only a driver/guide – a title that indicates an exceptional ability to multitask – but also a pilot, a multi-linguist, the founder of a language school, a marketing expert and a teacher. Amazingly, there was room for all of them in the driver’s seat.

Our next stop was Háifoss waterfall, one of the country’s highest. It’s located in Fossárdalur valley, which is at the end of Þjórsárdalur valley. Just like Hjálparfoss, it’s in Fossá river – making it another branch on the same family tree, so to speak. 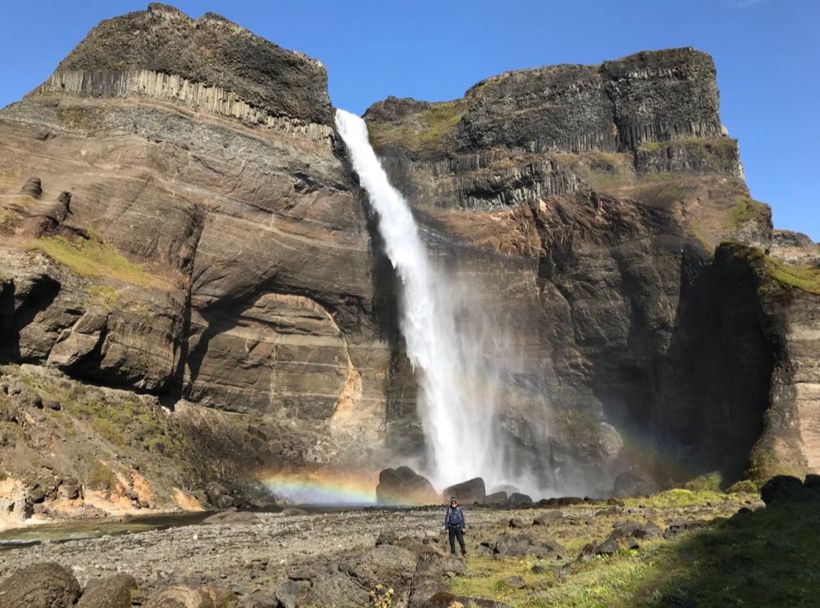 
Once out of the vehicle, we walked toward Háifoss. It cascades down 128 m (420 ft) into a deep gorge, from the top of which you can admire it, but hiking down the trail to the bottom of the gorge is necessary to take in all its beauty. It’s a half hour walk down a narrow trail, and the farther you walk, the more spectacular the view of Háifoss becomes. To me it looked like a snow-white horsetail, swept to the side by the wind. At its bottom, a beautiful rainbow had formed. Right next to it, another waterfall, considerably leaner – almost like its little brother - came cascading down the cliffs. It’s called Granni, and appropriately so, for the word means both “neighbor” and “the lean one.”

We stayed a while admiring the beauty around us – the amazing whiteness of the water and the colorful basalt cliffs - not only brown with green lines of moss, but also including a hint of red. 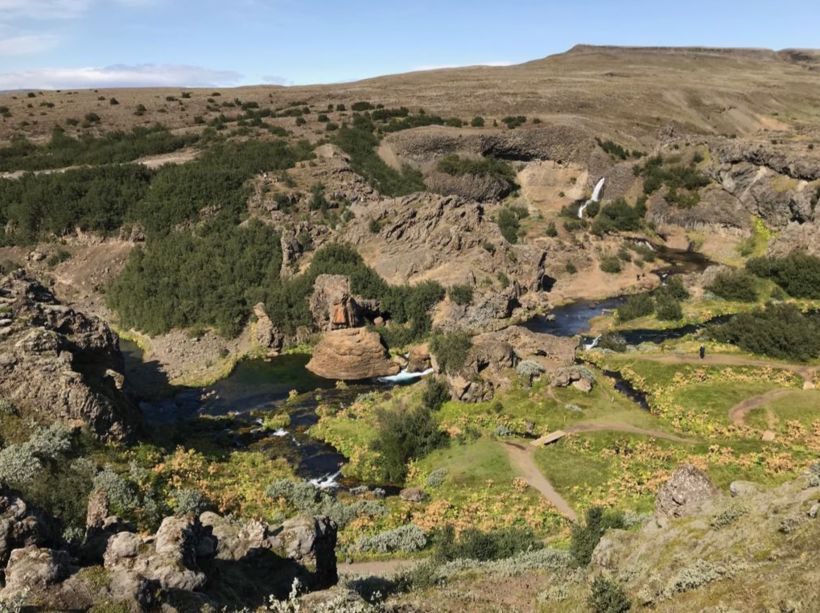 
Then it was time to move on to our next stop, Gjáin rift – also in Þjórsárdalur valley. We kept driving along a gravel road and stopped at a place that gave us a perfect view of the rift. On this sunny day, this place looks like a picture in a book of fairy tales, with its numerous creeks, waterfalls and lava formations, lined up together in a relatively small place, and decorated with every shade of green. No surprise, then, that it was chosen as a location for the filming of one of the episodes of Game of Thrones . From above, Gjáin, with tourists in their colorful windbreakers, looked to me like a fairy land with a population of people as tiny as Lilliputians.

Mesmerized by this magical view, we now moved on, to the last stop. This was the part I had been looking forward to the most. Although well aware that things can be looked at in different ways, it had never occurred to me that this included Gullfoss – our most famous waterfall. 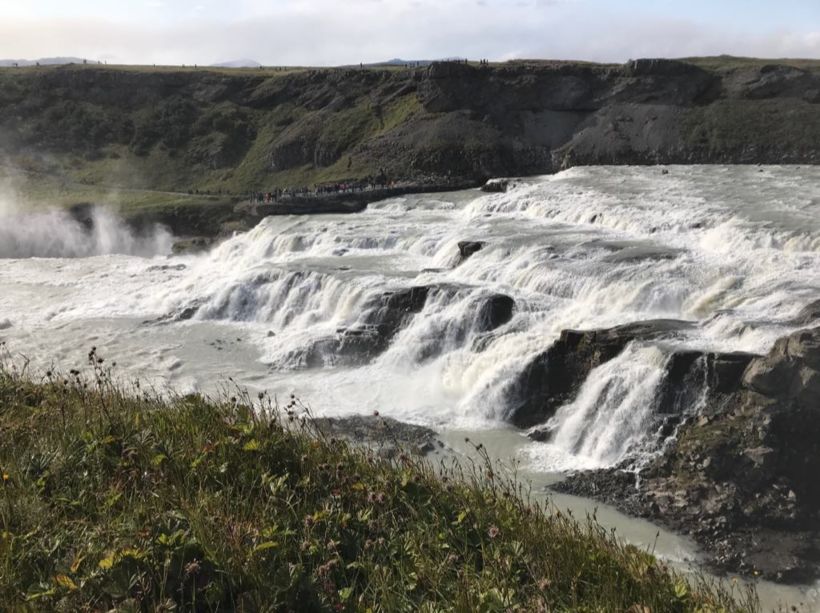 
In order to approach it from the east bank of Hvítá river, instead of from the much better known west bank, we, once again, had to drive along a road only intended for well-equipped 4x4s. Having reached our destination, we were still a 25-minute walk away from the river Hvítá. We trod along a narrow path until we finally saw Gullfoss in a new light. 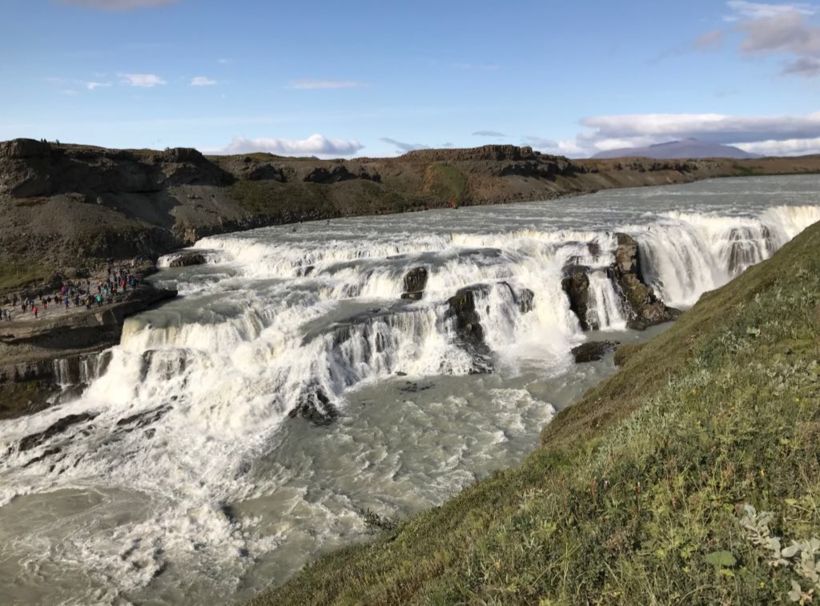 This picturesque waterfall plunges down two different drops – the first one being 11-m-high (36 ft), the second one 21 m (69 ft). From this viewpoint, the upper part of the waterfall seemed larger and wider than seen from the other side. Naturally, the lower part was not as visible as from the other side, since we were standing behind it. What amused me the most was seeing the endless line of tourists, all along the river, on the other side. Their red, green, yellow and blue outdoor apparel dotted the landscape, reminding me of carefully lined up Ludo pieces. Had they spotted us, they must have wondered how on earth we made it to the “secret” side.

We walked along the river for a while, before heading back to the vehicle. Just like after an informative discussion with people who reveal to me a new way of looking at an issue, I felt my horizon having widened after this spectacular sight.

It was time, now, to head home. I sat in the back seat of the Landcruiser, relaxing, while the other two, having traveled the country widely, compared notes. As we were driving past Ingólfsfjall mountain, Regína suddenly pointed to a farm on the right and remarked, “My Grandpa Kjartan used to own this land.” This time, it was Kjartan who shouted in surprise, “Was he your grandfather?” He smiled broadly and, after a short silence, he added, “That makes you frænka mín. We’re third cousins!” 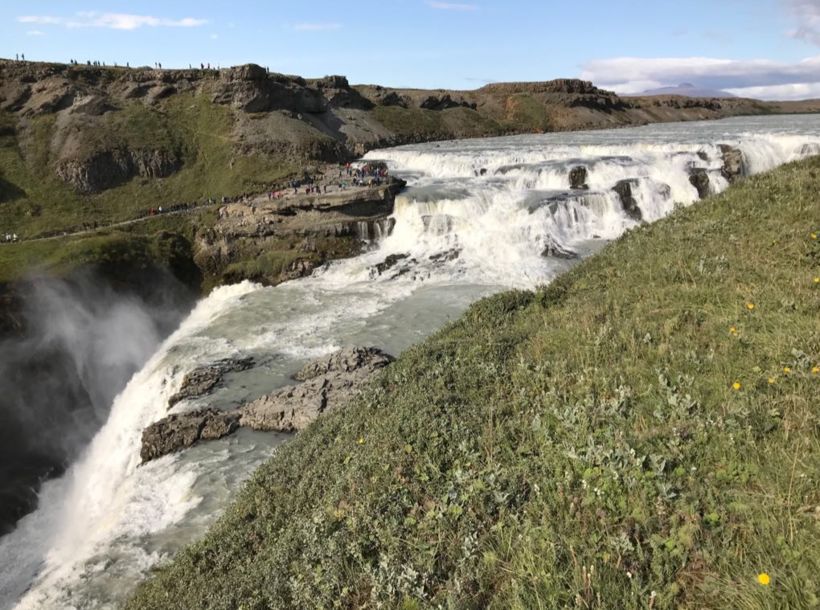 Naturally, Regína was delighted, and what ensued was a long conversation about their relatives – each giving the other information about all the ones they hadn’t seen in ages. I certainly shared their joy at being able to call each other frænka and frændi, and quickly opened Íslendingabók on my cell phone – the indispensable website that tells Icelanders in an instant how they are related – hoping to be able to surprise them by being their frænka, too. To my disappointment, I discovered that our family trees were far apart by Icelandic standards: the only common ancestors I found dated all the way back to the 1700s.

Still, this had been a wonderful day – full of surprises, unexpected connections and new ways of looking at things.