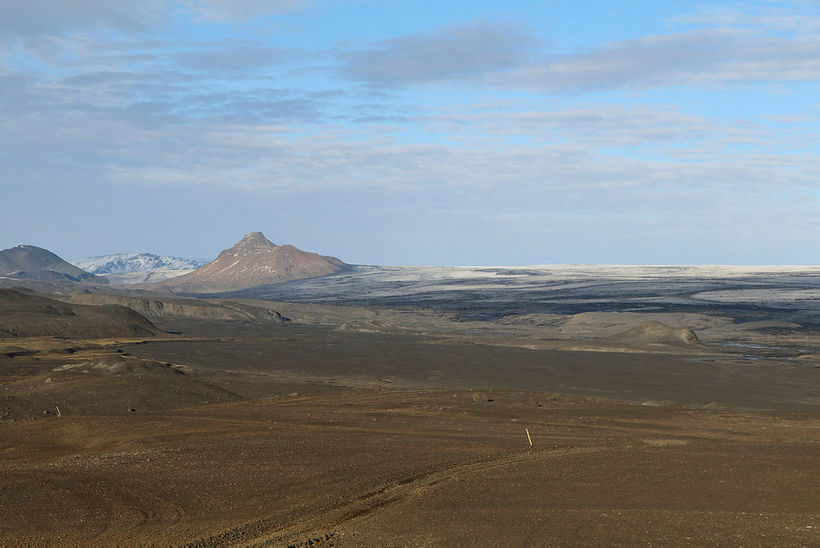 Due to the climate crisis, scientists were unable to access Vatnajökull glacier this year by the regular route across Tungnaárjökull glacier.

Geophysicist Magnús Tumi Guðmundsson explains in an interview with Morgunblaðið today that when glaciers retreat on flat land, they sometimes leave mud behind, which doesn’t dry up, making the area impassable. This is the first time in the 66-year history of spring expeditions, conducted by the Iceland Glaciological Society, that the route across Tungnaárjökull is impassable.

The red route is the one scientists had to take instead of the blue one, which is impassable.

“This is one of the main routes onto Vatnajökull glacier and defined as [such] since the area was designated a national park,” Tumi states. “Now, the glacier has retreated so much that where we used to ascend it, there is now ice as hard as steel and no passable way onto the glacier itself.” He finds it ironic that the glacial retreat should make it harder to access glaciers in order to monitor it.

“The climate has been warming and warming fast in the past 25 years or so,” Magnús Tumi states. He explains that because Tungnaárjökull glacier is one that has gone through an onrush about every 50 years in the past century, it will be a while before the next onrush makes the glacier passable again.

Because of the main route being impassable, scientists from Reykjavík had to take a course twice as long as they normally do to conduct their research on Vatnajökull glacier this spring, or 510 km (317 mi) instead of 270 (168 mi). Scientists from various institutions participated in the annual expedition, including from University of Iceland’s Institute of Earth Sciences and the Icelandic Met Office. The bulk of knowledge obtained over the years about volcanic areas in Vatnajökull glacier is based on data gathered during such expeditions.