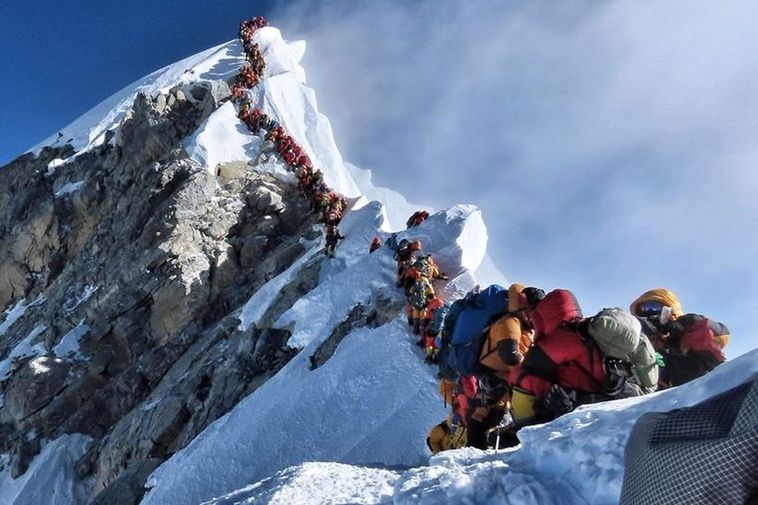 This picture was taken last night. About 200 people climbed the mountain yesterday. From the Facebook page of Mount Everest 8848M
Vala Hafstað
vala@mbl.is

Three Icelanders climbed Mount Everest, the world’s highest mountain, this morning, mbl.is reports. They are Bjarni Ármannsson, Leifur Örn Svavarsson and Lýður Guðmundsson. That brings the number of Icelanders who have reached the top of the mountain to ten. The first three Icelanders to climb the mountain – Björn Ólafsson, Einar K. Stefánsson and Hallgrímur Magnússon - did so on May 21, 1997.

This was Leifur Örn’s second time reaching the mountain top, at 8,848 m (29,029 ft), but he is the only Icelander to have climbed Mount Everest from the north side, which he did in 2013, a route considered more challenging than the south side.

Lýður is the third Icelander to achieve the so-called Grand Slam, which includes climbing the highest peak of every continent, in addition to reaching the South and the North Pole. The other two Icelanders to have achieved that are Leifur Örn and Haraldur Örn Ólafsson. Leifur Örn is the only one of them to have climbed Mount Everest twice.

All went well for Leifur Örn and Lýður this morning. They had reached the peak shortly after midnight, Icelandic time. They have now made it down to the south pass, where they’ll rest for a while before continuing to the highest camp.

‘Ali, John and Juan Pablo Will Live Forever in Our Hearts’