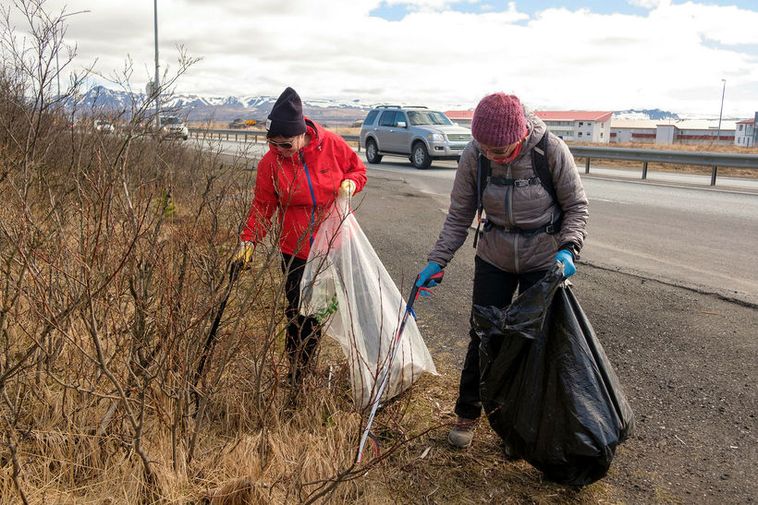 Tomorrow, Sunday, is your chance to participate in the Big Plogging Day (Stóri plokkdagurinn) in Iceland. “You don’t need any knowledge or expertise. You just need to be disgusted by trash and be eager to remove it from the environment and into the right place,” Einar Bárðarson, organizer of the event, which will take place between 10 am and 4 pm, tells mbl.is.

The focus will be on the areas surrounding the highways Reykjanesbraut, Vesturlandsvegur and Suðurlandsvegur in the metropolitan area and on the Reykjanes peninsula. “There is a lot of trash in this area,” Einar notes, partly because much gets stuck in depressions in the lava.

He points out that this area is the first one seen by people who visit the country, and that this route is driven by thousands of foreign travelers and Icelanders alike, every day of the year. That is why the area will be given a special focus, but plogging will take place in all parts of the country.

Last year’s Big Plogging Day, held on Earth Day, April 22, went very well. For example, 200 trash bags were brought to the Breiðholt waste collection station, the result of plogging alone. “That Big Plogging Day wasn’t all that organized, but the result was great,” Einar notes. He is hopeful that participation will increase this year. This year, Earth Day fell on Easter Sunday, so the plogging event was scheduled tomorrow instead.

This year, there is cooperation with more associations than last year, among them Ferðafélag Íslands (Iceland’s travel association), which provides team leaders at several stations. Icelandic President Guðni Th. Jóhannesson and Iceland’s Minister for the Environment Guðmundur Ingi Guðbrandsson will be among the participants, along with the country’s most enthusiastic ploggers.

The weather forecast is good for tomorrow, with calm winds and partly sunny skies predicted in all parts of the country, except for the southeast corner, where rain is forecast for the afternoon.

“I guess I’m the ombudsman for ploggers in Iceland. I’m their cheerleader,” Einar jokes. He says he tries to plog once a week.

You can join the group here on Facebook. You are welcome to join in the plogging, should you see the ploggers in your vicinity.

Participants are advised to dress according to weather, bring a tool for plogging and a bag (preferably a transparent one) for the trash.