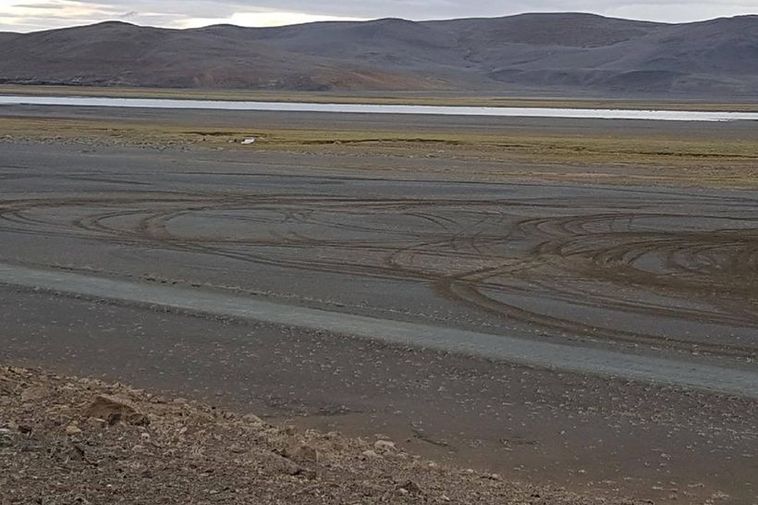 The tracks left by the vehicles in Grafarlönd, north of Herðubreið mountain on Monday. Photo/Police

On Tuesday, four drivers paid a total of ISK 1.4 million (USD 13,000, EUR 11,000) in fines for off-road driving by Jökulsárlón glacial lagoon in Breiðamerkursandur on Sunday and in the nature reserve by Grafarlönd on Monday. One of the people fined is an Icelandic guide. RÚV was first to report on the case. Akureyri deputy chief superintendent Jóhannes Sigfússon states that fines were issued by two police departments, in South and Northeast Iceland.

“The same four men were fined in both places. They paid ISK 100,000 each in South Iceland and ISK 250,000 each in our district,” Jóhannes states. All off-road driving is illegal in Iceland.

There were 25 foreign tourists in the group in seven modified 4x4s, but not all of the vehicles were driven off road. Damage to the area on the west side of Jökulsárlón glacial lagoon is considerable, and major damage was done to the land in Grafarlönd, north of Herðubreið mountain, mbl.is reports.

Investigation revealed ignorance and a lack of skill, and the people who were fined apologized for the damage done. According to Jóhannes, there are no indications that the Icelander, who was fined, works for a travel service, although he called himself a guide.

Jóhannes believes that preventive measures have helped. “Park rangers and police speak more frequently than before to travelers at the beginning of their journey to the highlands. We also talk to people in the highlands and emphasize these issues,” he explained.