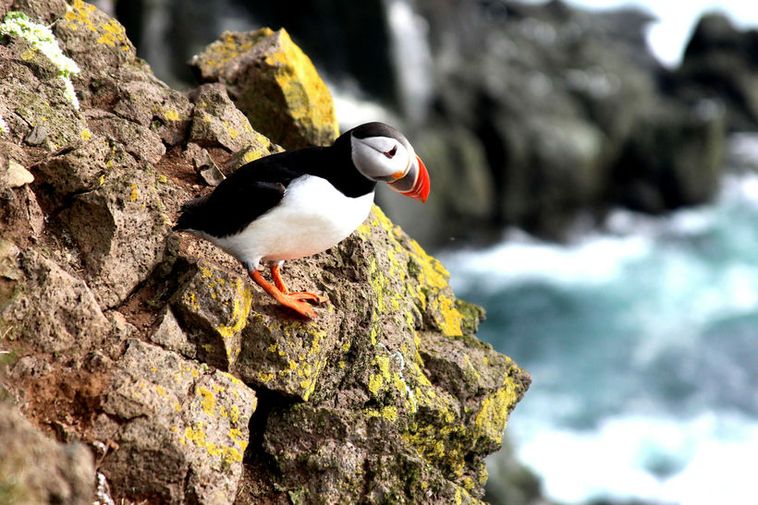 Some puffins in Iceland fly up to 110 km (68 mi) in search of food for their young. Those around Vestmannaeyjar islands, off the south coast of Iceland, fly that far to be able to feed their pufflings, but only bring home sand lance larvae, instead of sand lance, which has been scarce around the islands lately.

In an interview with Morgunblaðið on Tuesday, Erpur Snær Hansen, diector of the South Iceland Nature Center in Vestmannaeyjar explains how difficult it has become for puffins to feed their young. The information was gathered from GPS location trackers, placed on 11 pairs of puffins in Vestmannaeyjar and on Grímsey island, off the north coast of Iceland. The long distance traveled in search of food means that the young puffins are fed less often. They are simply not fed often enough, Erpur laments.

“Pufflings began dying in considerable numbers in Vestmannaeyjar last week,” he added. “The good news is that the population of sand lance seems to be recovering, especially in Faxaflói bay [on which Reykjavík is located].” Consequently, the outlook is much better for pufflings in Akurey island, a small island near Reykjavík, than it is in Vestmannaeyjar. There, the survival rate of the puffling population is about average. In Faxaflói bay, sand lance up to 17-cm (6.7 in) long were found. At Ingólfshöfði promontory in Southeast Iceland, the outlook, on the other hand, is not good for pufflings this year.

Erpur states it is good news that puffins bring sand lance larvae to the area around Vestmannaeyjar, and he hopes that to mark the beginning of the return of sand lance to the area. The South Iceland Nature Center has suggested that the catching of puffins be banned this year, on the grounds that it is not sustainable. “The catching is not sustainable,” he notes, “because how few pufflings have survived in the past 15 years.”

Weather Warnings for Most of Iceland