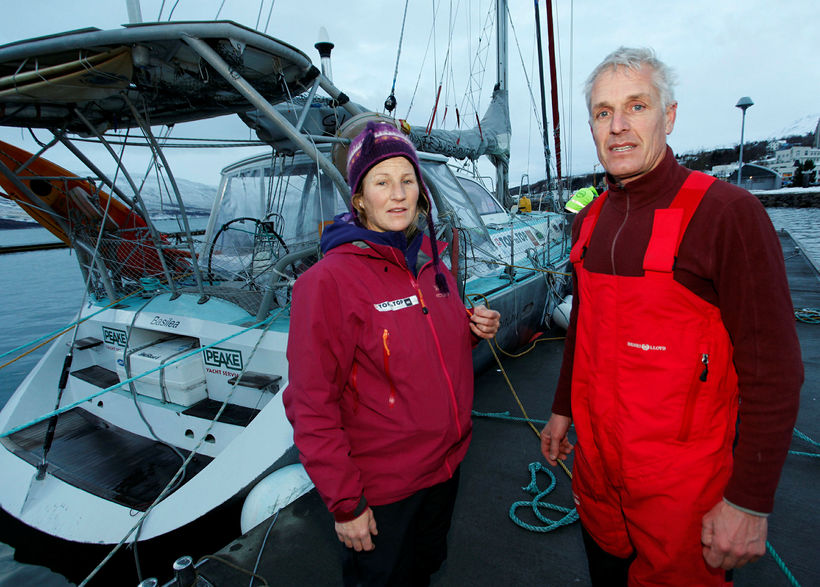 Dario Schwoerer and Sabine by the sailboat Pachamama, their home for 17 years. They got in danger during the storm. mbl.is/Skapti Hallgrímsson

A huge storm hit Iceland last weekend. Dario Schwoerer and his wife Sabine from Switzerland live with their family on a sailboat which was berthed at Akureyri pier and badly protected from the storm. The rescue team and the police managed to save them just in time.

Schwoerer is a climotologist and a skiing and montain guide. He and Sabine have been sailing around the world and living on their boat Pachamama for the last 17 years. Their six children are born all over the world, and the youngest child came into this world two months ago in Akureyri Hospital. The assistant Miriam also travels with the family. 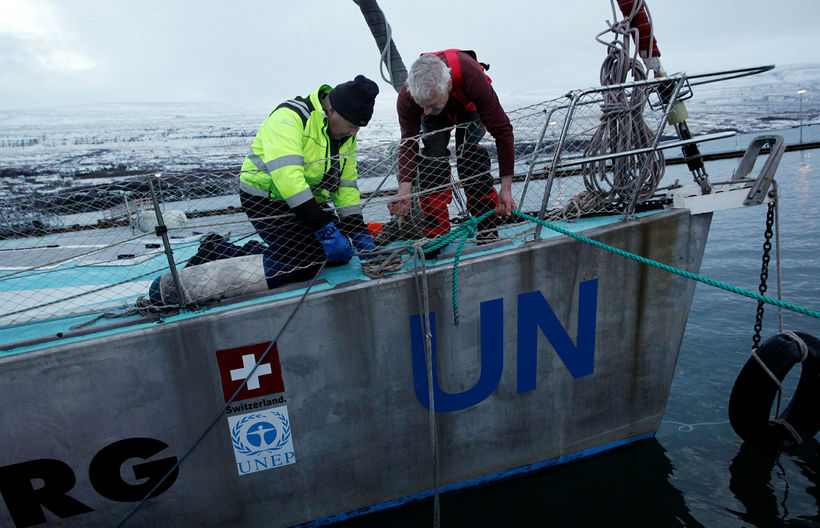 When news website mbl.is first contacted Schwoerer in the morning after the incident , he kindly asked them to call back as he was busy pumping water from the boat, preventing it from sinking. An hour later the job was done and the boat will stay afloat as long as the pumps continue to do their job.

Quite a shock for the family

"This was a hard night," said Schwoerer as Sabine and and him have never gotten into similar circumstances all these years they have been sailing.

"We got hit with bad weather in Alaska where the wind speed got up to 100 knots, but we have never encountered such a powerful and extreme storm. In 2004 the sailboat was damaged by a container floating in the South Pacific. This time the damages are more serious," he says. "This is a significant shock for the us as a family as Pachamama is our home."

Life boats and surfing boards got put between the pier and the sailboat for protection. mbl.is/Skapti Hallgrímsson

Schwoerer says the height of the waves was enormous and the wind pushed their sailboat away from the pier. A few smaller sailboats were in the harbor that slammed into the pier  and other ones slammed into cliffs.

The family's sailbot, which is quite larger, got deteched as dock fingers that fix the boats together and to the docks tore apart.

Crawling over the pier

The family called the Coast Guard, who averted the emergency line. "The waves were so strong that it was hard for the rescue team to get to the docks. It was totally crazy," Schwoerer said. "When the waves finally lowered, the rescue team was able to use ropes and cables to crawl slowly over the pier. Then we handed them the children."

He says the children were certainly afraid but stayed calm, but the boat is the only home they have ever known. He is also very proud of his two oldest children who are 11 and 12 years old, as they helped preventing that the boat would break at the docks. He is also very grateful to the people of Akureyri, but 50 of them helped out that night.

Looking for a home in Akureyri

The owner of a whale watching company let the whole family into his home, and some port workers were able to drag the boat to a safe place in the harbor, where they need to keep on pumping sea out of it, but the damages are quite severe.

"We have to take one step at the time," Schwoerer says. "First of all we have to find a place to stay here in Akureyri, as we can't live on the boat for a while. Then we need to repair the boat. We have heard there is a good shipyard here, and it would be best if we were able to do that here."

Damages inside the sailboat; fractured and broken walls. Skapti Hallgrímsson