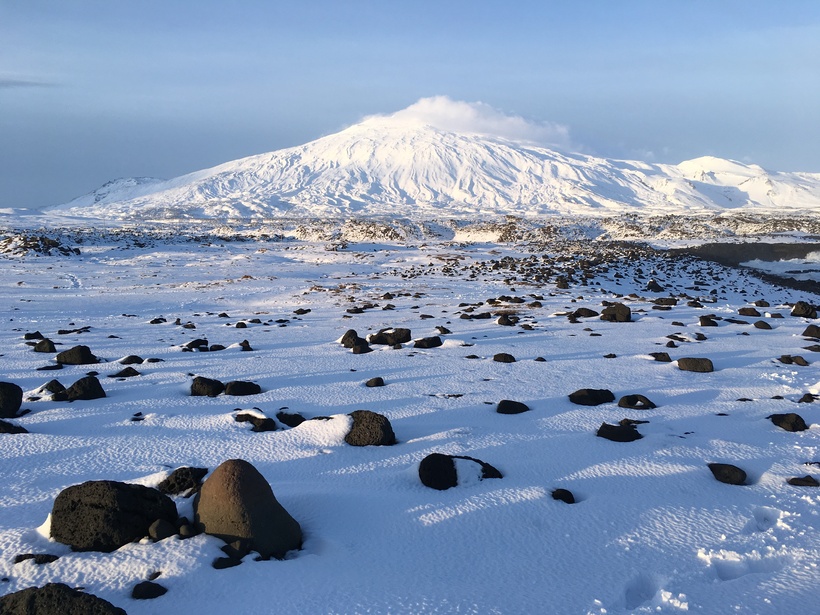 Snæfellsnes Peninsula is renowned for beautiful nature and charming villages. There are many things to do and see there, and most of them can be covered in a day trip from Reykjavik, even in winter as Iceland Monitor has tried and tested.

We started off early as the most important thing in winter tourism in Iceland is to use the daylight. It’s also essential to drive a car with decent winter tires, and have enough time to spare as snowy roads in winter may slow one down.

We drove north on ring road nr. 1 to Borgarnes, where we turned to the road towards Snæfellsnes. There we passed Borg á Mýrum, a farm known in the Icelandic Sagas. It was the home of settler Skallagrímur Kveldúlfsson and later his son, Egill Skallagrímsson, who was a famous poet and chieftain (if you are curious about them, you can add a quick stop at the Settlement Centre in Borgarnes ). Then we turned on road 56 which lies over a stunning mountain pass to the north side of the peninsula to reach our starting point.

The first destination is driving down to the harbour, which is just beautiful and where you can admire the surrounding small islands. Then a drive around town which is one of the scenes of Ben Stiller’s movie, The Secret Life of Walter Mitty, and an inevitable stop by the futuristic church. There are plenty of nice restaurants in town which make for a great lunch stop. 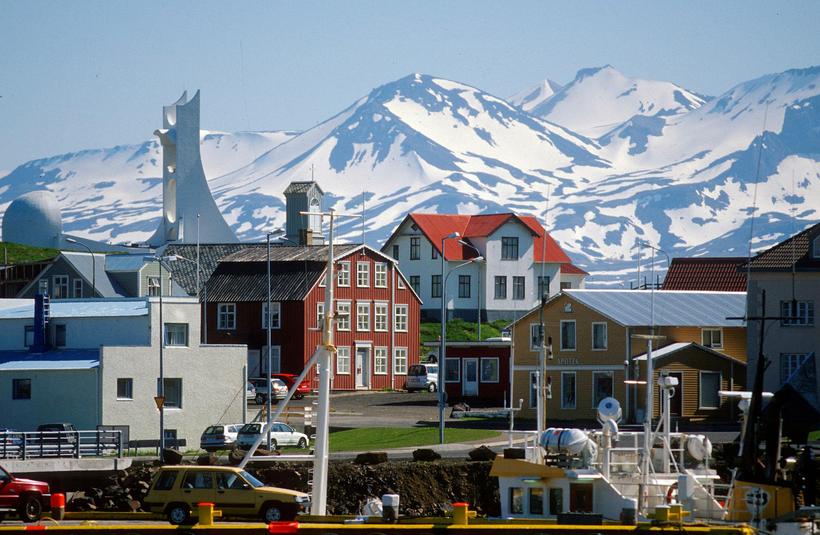 There is a parking on the road by Kolgrafarfjörður, with signs on information on the fjord. It is interesting for two reasons. It’s the one of the scenes of the Icelandic Saga Eyrbyggjasaga, and in the last years massive amount of herring have swam into the fjord and died. This has happened twice and over 52.000 tons of herring were left dead in the fjord. A likely cause is that they suffocated, they finished up the oxygen in the water, but why it swam into the fjord… who knows? 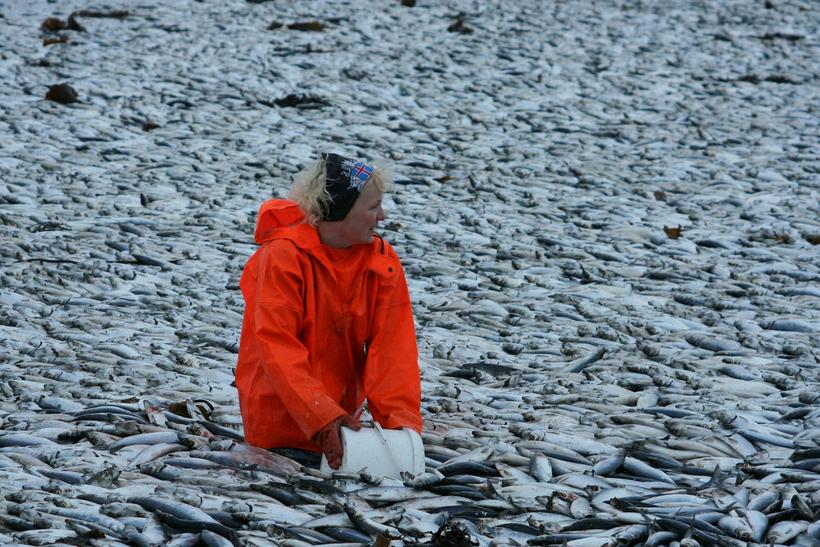 Fishing has been a vital part of the economy of Snæfellsnes for hundreds of years, and the towns of the area are all charming fishing villages. Small houses gathered around a church, surrounded by mountains. This could be the description of both Grundarfjörður and Ólavsvík (a little further west), both beautiful villages, lovely for a short drive around before heading on. 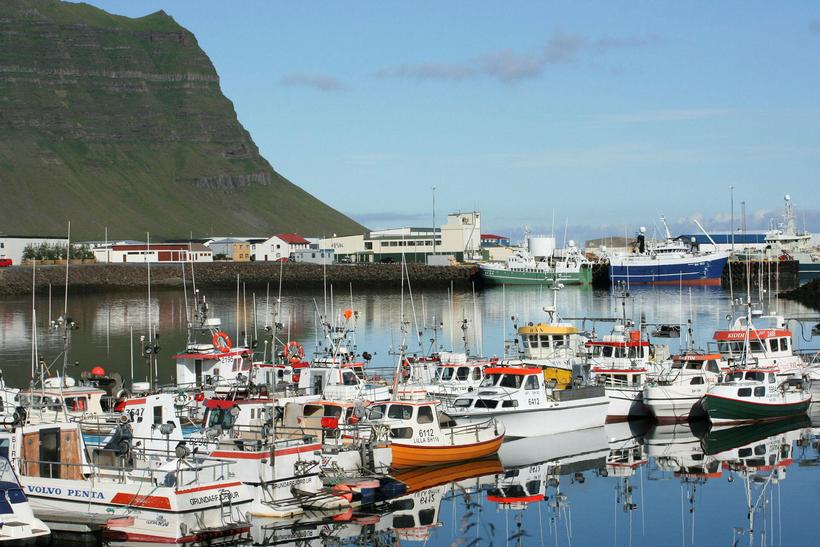 Fishing is a big part of the economy of Snæfellsnes. Photo: Iceland Monitor/Gunnar Kristjánsson

If you have looked Iceland up on the internet at some point and looked at pictures of it, all odds are that you are already familiar with Kirkjufell. It’s one of Snæfellsnes peninsula’s most famous landmarks. Waterfalls close by the mountain are a popular destinations for photographers, who take pictures of them and the mountain with snow, midnight sun or Northern Lights in the background. 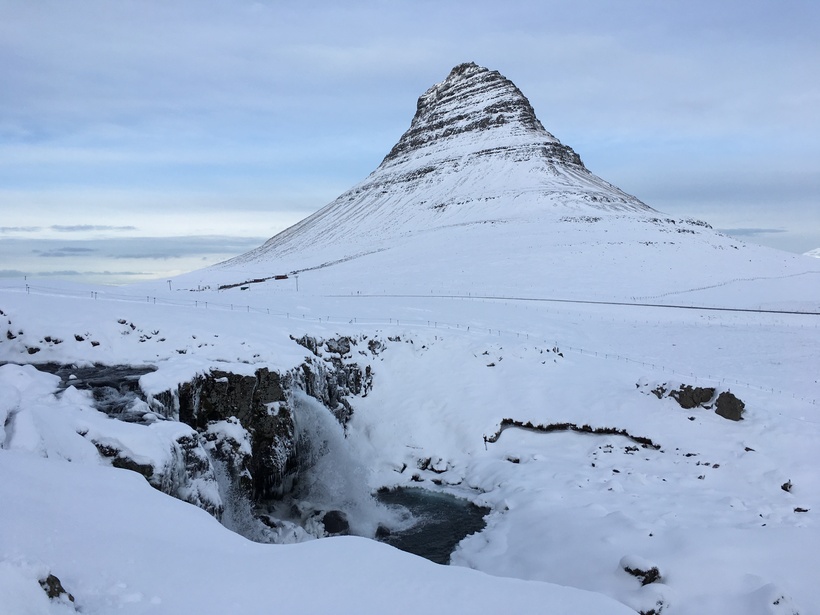 Kirkjufell is no less stunning in winter than in summer Photo: Teresa Michalczyk

There are black beaches all over Iceland. In fact, I remember clearly the day I saw white sand for the first time. Snæfellsnes has long stretches of black sand beaches, one between Grundarfjörður and Ólafsvík stretches particularly long. It’s a great place to park the car for a moment (just don’t leave it on the road), walk down to the beach and admire the scene. 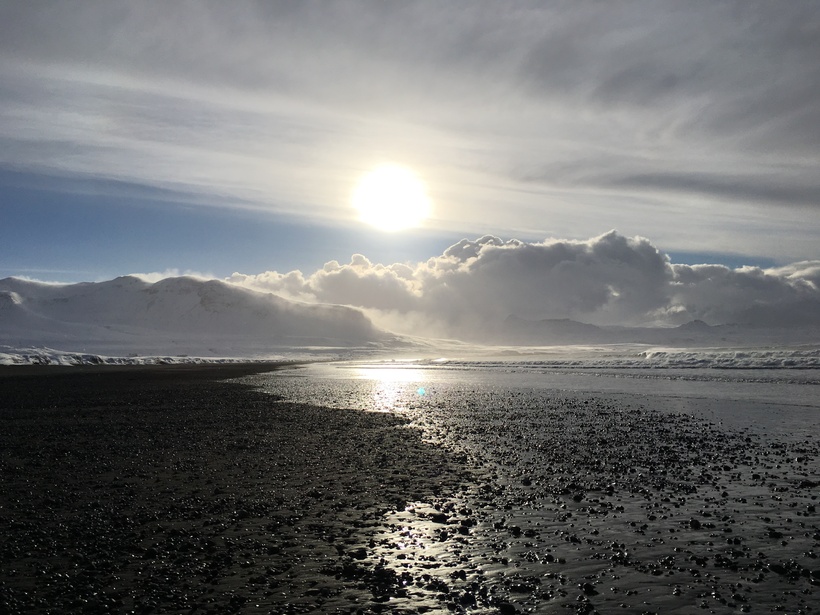 There are many long, stunning black beaches in Snæfellsnes. Photo: Teresa Michalczyk

By the time you enter the town Ólafsvík, you can see Snæfellsjökull Glacier loom above you. The glacier is impressive and has inspired many. The glacier has a role in works of both Nobel writer Halldór Laxness and Jules Verne.
The road up to the glacier is closed over winter, but it’s stunning to see from afar anyway so it doesn’t matter. You don’t have to rush to get your cameras out as the drive around the end of Snæfellsnes peninsula is a drive around Snæfellsjökull. You’ll see it out of the car window for the next hour or so. 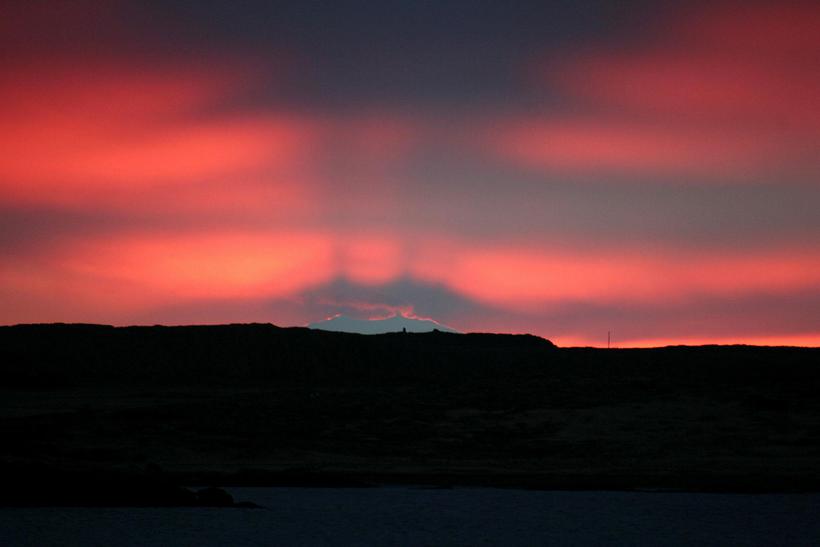 In the western part of Snæfellsnes there are many craters. (Snæfellsjökull itself is an active volcano). One of them is called Saxhóll, and you can climb it. It’s not that tall and there are stairs, so the climb is easy. Though it’s not that tall the view is stunning, with the ocean on one side, a glacier on the other and landscape dotted with craters. Saxhóll itself is a thing to behold. The crater itself is deep and the sides are made of small, rough lava pebbles. I recommend picking one up and feel how light and rough it is. 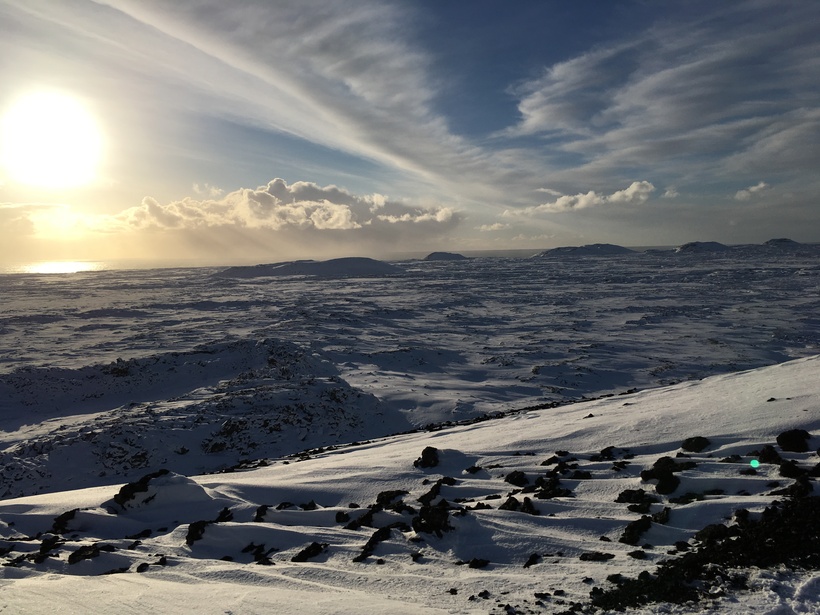 The view from Saxhóll is beautiful. Photo: Teresa Michalczyk

Lóndrangar are stunning rock formation on the beach on the southern part of the peninsula. They are the remains of a crater, which has been eroded to its present form by the sea. There is a short walk to them from the parking lot, where we passed a lighthouse and a beach covered in smaller cliffs and big rocks, which the waves beat savagely on. The spray from the ocean was both refreshing and impressive, reaching far up into the sky. Standing there, looking around at this stunning nature with the glacier behind us and feeling the power of the sea, is something else. 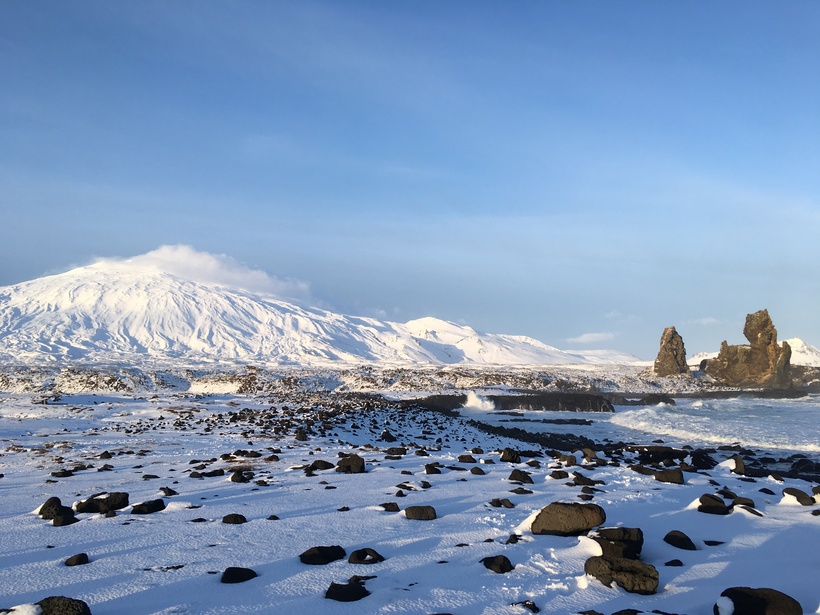 The beach around Lónadrangar is very rocky, Photo: Teresa Michalczyk 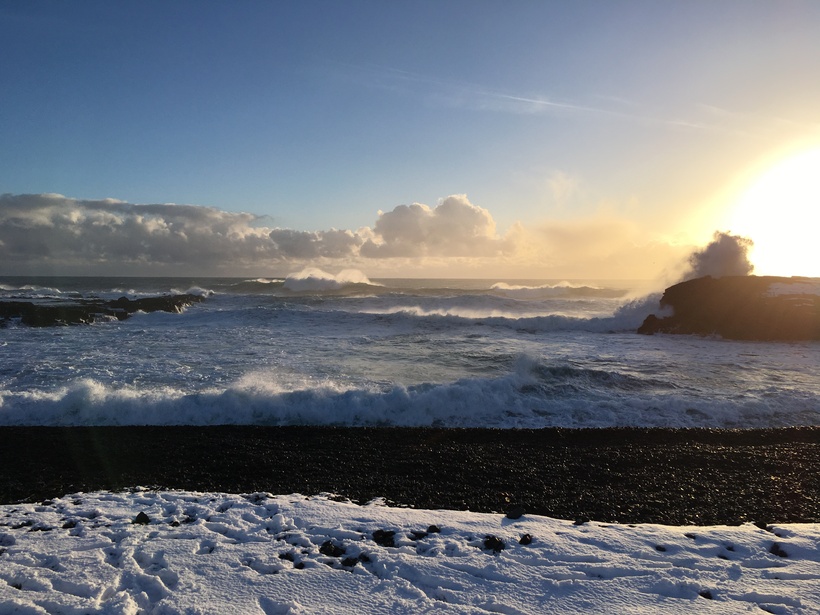 The sea was no less stunning than the cliffs. Photo: Teresa Michalczyk

Arnarstapi is a very small village that used to be an important trading post, and much bigger than it is now. The pier, and all of the coastline around the village is almost decorated with stunning rock formations of columnar basalt. This is the rock formation that inspired some of the design of Harpa Concert hall, and if you look at the rocks you can clearly see why. There are very nice walks in the area and by the coastline. 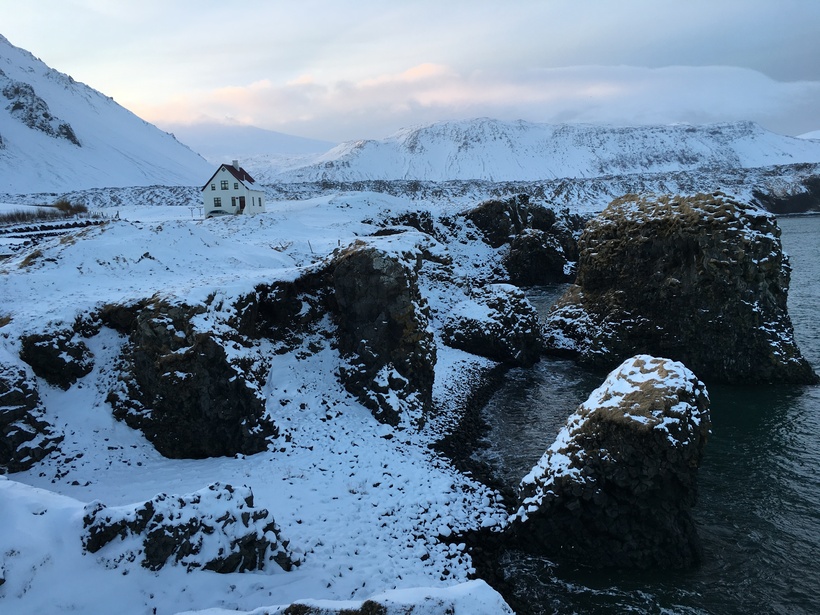 The rock formations at Arnarstapi have inspired many artists. They are clearly visible in the cliffs even though everything else is covered in snow. Photo: Teresa Michalczyk

The daylight of February lasted us to see all these things, as the distances between them are not great. Early winter would do just as well.

We saw Arnarstapi in twilight, which lasted for the better part of the drive to Borgarnes as it lasts for what seems like hours this time of year. And as we drove off the peninsula we looked back to see Snæfellsjökull bathed in red sunset.