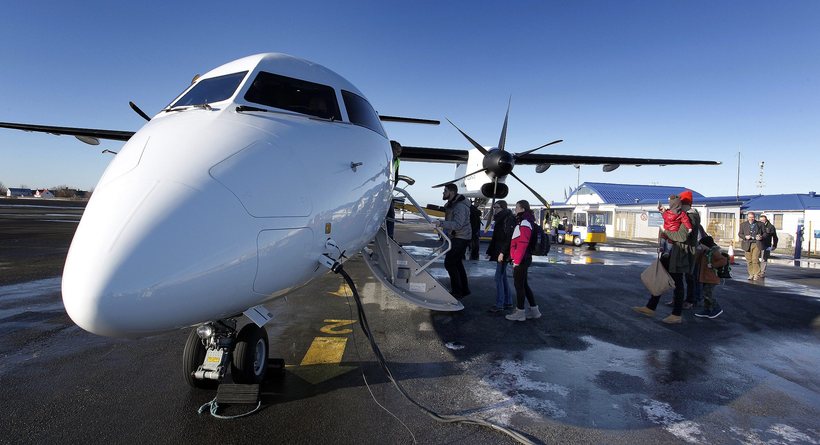 Today saw the introduction into service of Air Iceland’s first new Bombardier Q400 aircraft, with a 35-minute flight from Reykjavik to the northern town of Akureyri.

CEO of Iceland’s domestic airline Árni Gunnarsson was among the passengers on this maiden flight. The aircraft was flown by Captain Jónas Jónasson, with Bryndís Torfadóttir in the co-pilot’s seat.

This is the first of three new aircraft set to replace Air Iceland’s current fleet of Fokker F-50s.

They will operate from Reykjavik City Airport (RKV) to Akureyri and the East Iceland town of Egilsstaðir and – starting next week – from Keflavík International Airport (KEF) to Aberdeen, UK. The latter service will be operated on behalf of national flag carrier Icelandair.

The flight to Aberdeen will take just under three hours. According to Gunnarsson, the service to Aberdeen has been well received and may well lead to Q400 flights to other destinations in the UK and mainland Europe. The new Bombardier Q400 on the tarmac at Akureyri. Photo: Skapti Hallgrímsson