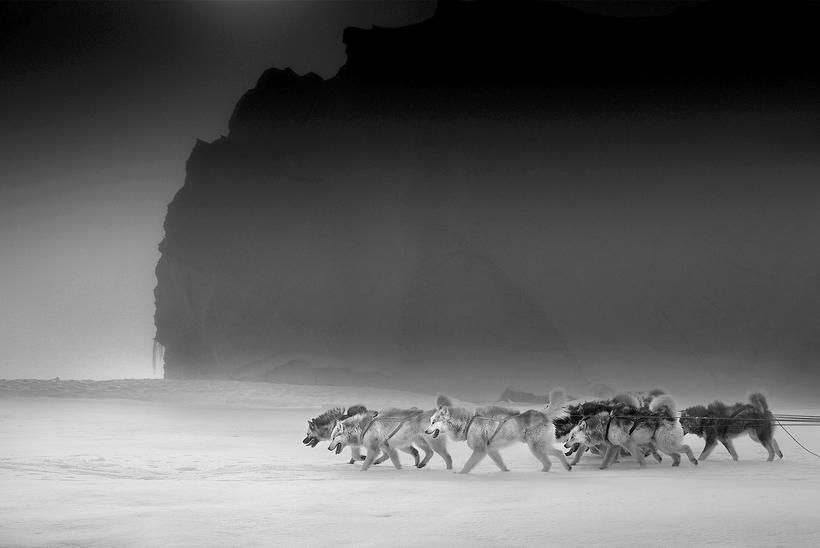 The Greenland Dog is hard as nails. It has to perform under the most extreme conditions, and has an history stretching back thousands of years.

Text and photos by Ragnar Axelsson.

Hunter Ole Brönlund from Ittoqqortoormiit in Greenland was on a hunting trip with his partner when they encountered a gigantic polar bear. When the bear heard the sledge dogs, it fled with the dogs sprinting in pursuit. The bear was drawing near. “I had to cut the reins on the sledge and let the dogs loose to catch the bear,“ says Ole. He only let half the dogs go so he would still have a few left to pull the sledge. The other hunter did the same.

The unleashed dogs quickly caught up with the bear and stopped it by barking and snatching at it. As the bear was busy trying to stave off the dogs, Ole and his partner slowly approached it. All the dogs were specially trained to hunt bears, fierce and completely fearless.

“I held the gun ready and walked towards the bear,“ Ole continues. “It was quite impressive to see twenty dogs hanging on its back, snatching at it with their jaws as they tried to pull it down onto the ice.“

Ole describes how he aimed at the bear, but could not shoot because of all the dogs hanging on its back like flies. One after the other they were thrown into the air in all directions as the bear managed to bite them and fling them off.

“It managed to kill three and wound five,“ says Ole. “Three of those dogs were mine.“ Two of them later had to be put away. “I could not put my lead dog away, it was too dear to me. Another hunter had to do that.“

The bear had bitten the lead dog and broken its spine. The dog had been mutilated and it was lying on its belly with the hind legs turned up. “I walked towards the dog and petted it. It was licking snow, but could not move. It was the best dog I have ever had,“ says Ole. There is sadness in his voice. They managed to fell the bear, which was among the biggest he had seen, well over three metres tall. “It is as if the male animal just keeps on growing.“ 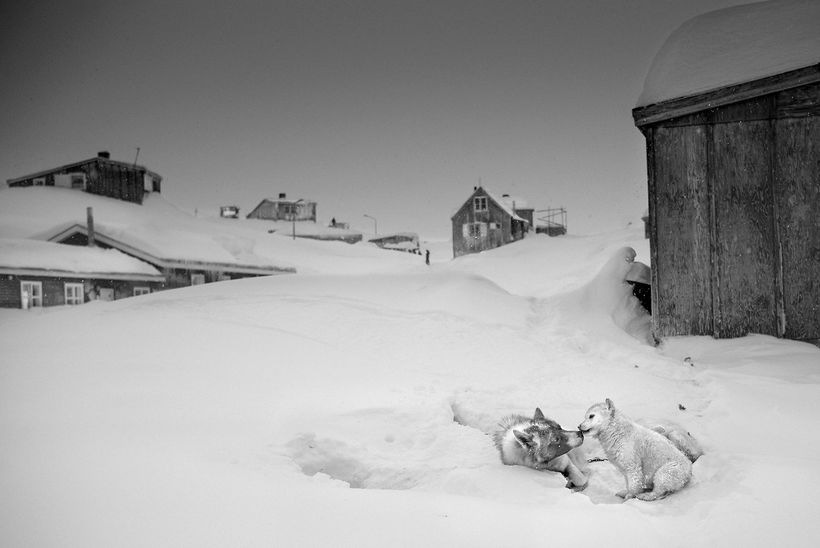 The Greenland Sledge Dog is of the Husky-type and originates in the North. Archeological research indicates that it first arrived in Greenland with the Sarqaq people four to five thousand years ago.

The oldest bones were discovered in Siberia. They are about seven thousand years old, which means that the Greenland Dog is one of the oldest breeds in the world.

Since the dogs are first and foremost bred to work, the owners emphasise their strength and speed over temperament. They grow up and live in groups, which is more exacting for the owner, who has to be disciplined and firm to have good control over the animal.

If the owner succeeds in gaining the dogs’ respect, they may become very loyal, and are known to care greatly for their owners in every way, especially when in packs.

The Greenland Dog is banned in some places in Greenland, and their numbers have diminished significantly in the past decades. Some people even worry that the breed might be on the verge of extinction.